What are film capacitors? 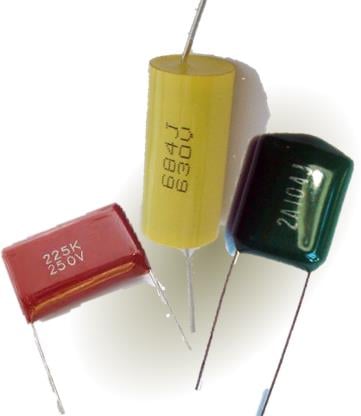 Film capacitors are capacitors which use a thin plastic film as the dielectric. This film is made extremely thin using a sophisticated film drawing process. Once the film is manufactured, it may be metallized or left untreated, depending on the needed properties of the capacitor. Electrodes are then added and the assembly is mounted into a case which protects it from environmental factors. They are used in many applications because of their stability, low inductance and low cost. There are many types of film capacitors, including polyester film, metallized film, polypropylene film, PTFE film and polystyrene film. The core difference between these capacitor types is the material used as the dielectric, and the proper dielectric must be chosen according to the application.

PTFE film capacitors, for example, are heat-resistant and used in aerospace and military technology, while metallized polyester film capacitors are used in applications that require long term stability at a relatively low. Cheaper plastics are used if cost is a bigger concern than performance.

A film capacitor is a capacitor that uses a thin plastic film as the dielectric. They are relatively cheap, stable over time and have low self-inductance and ESR, while some film capacitors can withstand large reactive power values.

Film capacitors are widely used because of their superior characteristics. This capacitor type is not polarized, which makes them suitable for AC signal and power use.  Film capacitors can be made with very high precision capacitance values, and they retain that value longer than other capacitor types. This means that the aging process is generally slower than in other capacitor types, such as the electrolytic capacitor. Film capacitors have a long shelf and service life, and are very reliable, with a very low average failure rate. They have low ESR (Equivalent Series Resistance), low self-inductance (ESL), and as a result very low dissipation factors. They can be made to withstand voltages in the kilovolt range and can provide very high surge current pulses. A special class of film capacitors, which is called power film capacitors is available, and this class of film capacitors can withstand reactive power in excess of 200 volt-amperes. These capacitors may have special screw-type terminals which can withstand high currents. Screw-type terminals replace soldered joints because power film capacitors sometimes need to be changed in the field. Unfortunately, their superior electrical properties and stability come at a price. Film capacitors are bulkier than their electrolytic equivalents, which means that limited SMT (Surface – Mount Technology) packages are available. They can also burst into flames if overloaded, but this characteristic is somewhat common among different capacitor types.

Film capacitors are made of a thin dielectric film which may or may not be metallized on one side. The film is extremely thin, with the thickness being under 1 µm. After the film is drawn to the desired thickness, the film is cut into ribbons. The width of the ribbons depends on the capacity of the capacitor being produced. Two ribbons of film are wound together into a roll, which is often pressed into an oval shape so that it can fit into a rectangular case. This is important because rectangular components save precious space on the printed circuit board. Electrodes are added by connecting each of the two electrodes to one of the films. A voltage is applied to burn out any imperfections using the self-healing property of film capacitors. The case is then sealed using silicon oil to protect the film roll against moisture, and dipped in plastic to hermetically seal the interior.

Lighting ballasts are used for proper starting and operation of fluorescent lights. When a ballast is faulty, the light will flicker or fail to start properly. Older ballasts used only an inductor, a solution which provides a poor power factor. New designs use a switched power supply which relies on film capacitors for power factor correction.

Snubber capacitors are protective devices which damp or “snub inductive kickback voltage spikes. These circuits often use film capacitors because of their low self-inductance, high peak current and low ESR, which are all critical factors in a snubber design. Polypropylene film capacitors are most often used in this type of circuit. Snubbers are used in many areas of electronics, especially power electronics in devices such as flyback DC-DC converters and others.

Film capacitors can also be used in a more conventional way as voltage smoothing capacitors, in filters, audio crossovers. They can be used to store energy and release it in a high-current pulse when needed. High-current electrical pulses are used to power pulsed lasers or generate lighting discharges.