What are air capacitors? 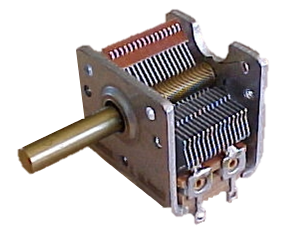 Variable air capacitors are used in circumstances where the capacitance needs to be varied. They are sometimes used in resonant circuits, such as radio tuners, frequency mixers or antenna impedance matching applications. Another use for variable capacitors is while prototyping an electronic circuit design. Sometimes, it is simply easier to find the appropriate capacitor value by trial and error instead of calculating it exactly.

Air capacitors are capacitors which use air as the dielectric medium located between conductive plates.

Air capacitors have a small capacitance which usually lies between 100pF and 1nF. The maximum working voltage depends on the physical dimensions of the capacitor. A high operating voltage requires that the distance between plates is sufficient to avoid electrical breakdown of air. If breakdown occured, it would cause sparking between the plates, the capacitor would not work properly and could even get damaged by the electrical arc. Therefore, capacitors that work at higher voltages are generally physically larger to allow sufficient space between plates. Typical operating voltages are between a few tens to a few thousands of volts. For higher operating voltages, a similarly constructed capacitor is sometimes used, however air is evacuated from the device and vacuum is used as the dielectric. The dielectric constant of vacuum is nearly the same as that of air, but the breakdown voltage is higher and not dependent on air humidity and particulate pollution.

Air capacitors are non-polar. This means that air capacitors may be safely used without regard to DC polarity, which is useful in some applications. They are safe for use in AC applications, as long as the maximum voltage rating is not exceeded.

Construction and properties of air capacitors 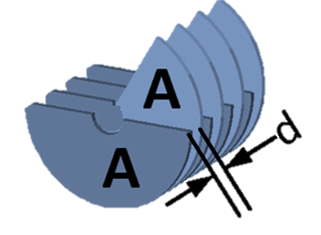 Variable air gap capacitors are usually made of two groups of semicircular metal plates. One group is fixed, while the other can be rotated using a shaft connected to it. The two groups are sandwiched with an air gap between each two plates. The user changes the capacitance by rotating the shaft and increasing or reducing the amount of overlap between the two groups of plates. Reduction gear mechanisms may be used to increase the precision and allow for finer tuning and better capacitance control. By carefully engineering the shape of the plates, it is possible to achieve, for example, a linear or logarithmic function of angle of rotation vs. capacitance. In order to improve the characteristics of air capacitors, sometimes the air is evacuated from a sealed chamber and this creates a vacuum capacitor. Other materials, such as plastic foils may also be used as the dielectric material.

In spite of the relatively low breakdown voltage and low dielectric constant of air and vacuum, they still have some advantages over other materials. The most important advantage is the low leakage current, meaning that the operating losses inside an air capacitor are minimal, especially if the humidity is low.

Butterfly variable capacitors have two stators and a rotor arranged in such a way that turning the rotor will vary the capacitance between the rotor and either stator equally.

Applications for variable capacitors are mostly constrained to AC circuits. Most applications demand high frequency, high power and low loss properties. They are used in radio tuning applications, antenna tuning and so on. Air capacitors are interesting for military applications due to their inherent resistance to electromagnetic pulses which can be created intentionally to destroy electronic equipment, but are also a byproduct of a nuclear explosion. Modern day applications include RF matching networks for plasma control in conductive material deposition on silicon wafers, as well as MRI medical scanners, which require non-magnetic variable capacitors. Since air capacitors are made of aluminum, which is non-magnetic, they work great in strong magnetic fields.