The Risks of Static Electricity in the Petroleum Industry

The Risks of Static Electricity in the Petroleum Industry

Learn about the threats of static electricity in Class I hazardous (classified) locations.

The principal hazard of static electricity is a spark discharge that could ignite a fire or even cause an explosion. Hazardous products in Class I locations consist of flammable gases, vapors, or liquids. Static electricity along with too much heat can ignite these products.

Dangers in the Petroleum Industry

Nowadays, there is ample knowledge about ignition risks due to static electricity in hazardous locations. Most of this understanding comes from the experience and research in the chemical and petroleum industries. Research in the field continues providing information about electrostatic phenomena. New processes are examined and standard procedures are developed for hazardous conditions.

A Brief Review of Electrostatics

The fundamental concept of electrostatics is that electrical charge can be accumulated on objects when they are rubbed together and separated quickly.

When the bodies accumulate a sufficient amount of charge, a spark may occur. A typical example is the light shock felt when touching a grounded metal surface, such as a faucet, after walking across a nylon carpet. 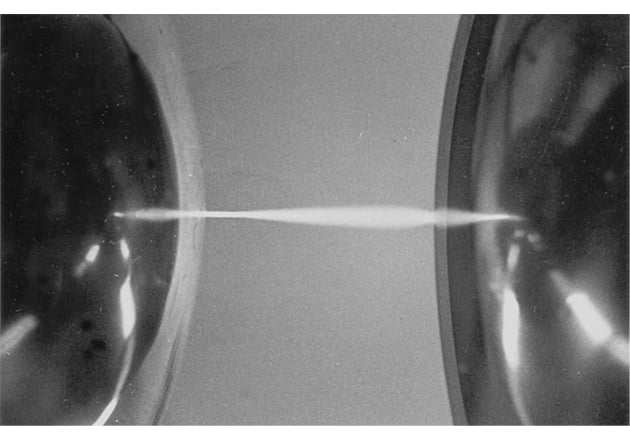 Before we go any further, let’s solidify the meaning of some important terms pertaining to flammable/combustible materials handled in the petroleum industry. 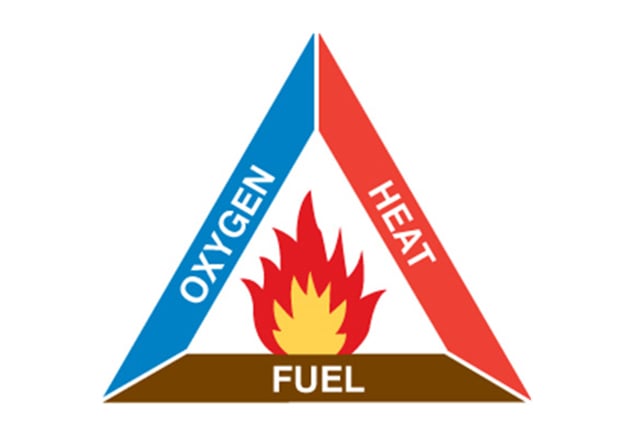 Let’s look at each of these causes in more detail.

Low Conducting Liquids Flowing through a Pipe or Hose

Many petroleum products can become electrically charged when they flow through pipes and hoses – including gasoline, kerosine, fuel oils, jet fuels, diesel, and similar, which are poor electrical conductors. Usually, these static charges do not become unsafe unless the flow velocity is high.

When a liquid flows along a pipe, the pipe’s wall absorbs its ions. This charges both the pipe and the liquid. The charges try to neutralize and stay close, forming an electrical double layer that resembles a capacitor’s plates.

The electrically charged flowing liquid can be considered as an electric current. Although the current is small, about 1 µA, it can generate a voltage high enough to produce a spark.

Static charges increase when pumping the liquid at a high velocity and passing it through filters (a filter can produce from 10 to 200 times more charge), valves, and fittings. Pipe diameter reductions can also increase static charges. Nonconducting piping, such as PVC or fiberglass, and isolated sections of metallic piping also help static charges to build up. Impurities, such as metal oxide, water, and chemicals increase a liquid’s static charge generation properties.

Turbulence in a Tank

Overhead filling of tanks produces friction between the feed pipe and the liquid (most often when there is turbulence). Static charges accumulate on the liquid surface and on the receiving tank’s shell when insulated from the ground. Sparking may arise across the liquid surface, and from the body to the ground or a grounded object – including people.

The likelihood of a spark from the liquid to the tank wall depends on the product’s static charge generation features. With an insulated metal container, the sparking from the liquid surface can be a substantial risk, regardless of the liquid’s conductivity.

Splash filling and fine mist droplet buildup can generate static charges of sufficient magnitude to be a source of ignition.

Metal tanks resting on a non-conductive base can build up static charges, mainly when they are filled through the dome.

The static charges in tank trucks are produced either by the product being filled or by the tires rubbing against the road. However, the hazard from charging via carbon-loaded road tires is small because the charge bleeds rapidly through the tires to the ground, decreasing the potential to a non-hazardous level in a few seconds.

The main concern is the charging during the liquid transfer because it may spark between the dome and the fill pipe.

Jet nozzles are particularly prone to static charges buildup. High flow velocities increase the spraying inside the tank, fostering static charge generation. Restricting the flow rates in the tank fill line and the discharge nozzles will provide an additional level of protection against excess static electricity.

The Impact between Solids

Impact of solid particles on tank plates – such as sandblasting – and shotcreting.

Humans working in these hazardous locations may be a source of ignition.

Small amounts of water can cause a dangerous buildup of static charges. Also, water washing – and fire-fighting sprays – can generate enough charge to ignite flammable materials.

An ignition source may be a spark initiated by a static discharge from the high-speed fine particle water mist from a high-pressure head. Static charging also occurs when droplets of water settle on the bottom of tanks. Some tank fires have been initiated by static electricity produced during foam application from firemen’s nozzles or remote monitors.

It is vital to keep all petroleum products as free from water as possible. 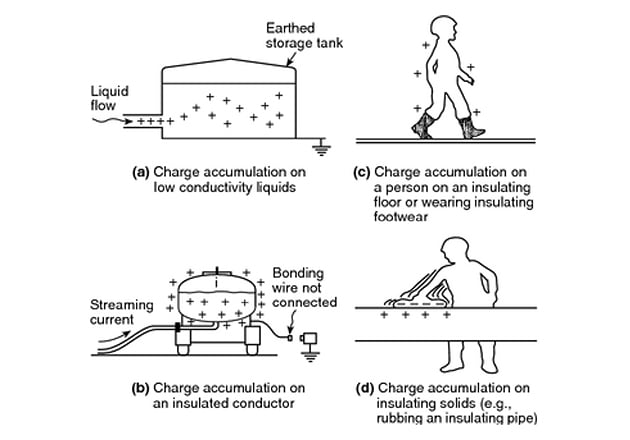 The main danger of static electricity in flammable gas, vapor, or air mixtures is a spark discharge that might produce a fire or explosion. A hazardous product can easily ignite when precautions lack or are ignored.

Current evaluations of the ignition hazard due to static electricity are of high quality, based on industrial experience and research.

One way of generating static electricity is by contacting or rubbing two bodies and swiftly separating them afterward.

Static charges in the petroleum industry result from different sources.

A common situation that produces static charges is the flow of liquids through pipes and hoses. The static charges will increase when pumping low conductivity liquids at high velocities through filters. Impurities, such as water, metal oxide, and chemicals, will also increase the static charge generation in liquids.

Splashing and turbulence of a liquid when loading a tank causes additional electrostatic charge generation, and a spark may occur between the pipe and the rising liquid. Extending the line to the bottom of the tank will help to avoid static splashing.

Tank trucks accumulate static charges because they are isolated from the ground by rubber tires.

An ignition could develop when filling a tank that previously held a high volatile liquid (switch loading).