This article considers several features of AESA power supply systems that are useful for engineers specialized in the development of AESAs and their power supply management.

Pulse load often sets very strict requirements to the level of conducted and radiated switching emissions of a PSU. Besides, in many cases for proper operation of equipment, it is necessary to have very high stability of supply voltage, both during pulses and in pauses between them. Transceivers of active electronically scanned arrays (AESA), which have recently been more widely used in defense and civil applications, can be classified as requiring such power supply units.

This article considers several features of AESA power supply systems that are useful for engineers specialized in the development of AESAs and their power supply management.

Advantages and Disadvantages of Centralized and Decentralized Power Supply Systems

AESA consists of the whole curtain of transmit-receive modules (TRM) each of them consisting of two to several dozens of transmitting-receiving channels. As a result, the total amount of AESA transceiver varies from several hundreds to several thousands [2]. Failures of one or several transmitting-receiving channels only slightly disrupt the antenna array. Even with the failure of several percent of all the channels, antenna remains operational [2, 3]. Thanks to this fact the structure of AESA has very high reliability and failure safety. 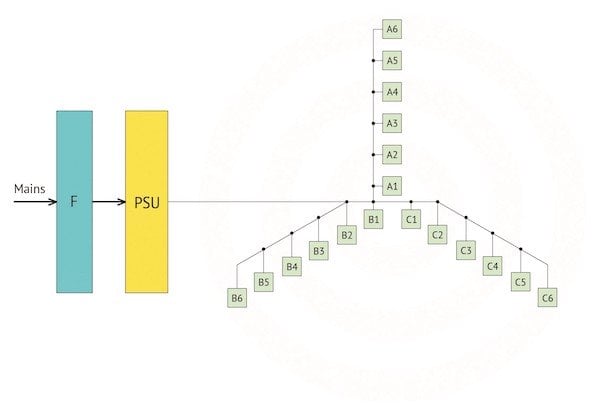 In a centralized system, one high power PSU receives power from the mains through an EMI filter (F) and converts it for the power supply of AESA curtain (the figure shows only three TRM groups А1-А6, B1-B6, and C1-C6). Such design of the system causes noticeable voltage losses on interconnect circuits, cased by transfer of high amperage output current and also by consumer remoteness from PSU that adversely affects the stability factor of the TRM supply voltage and requires the use of large diameter supply wires.

TRM voltage supply quality can be increased by means of an additional voltage stabilizer without galvanic isolation (POL-converters), but another conversion results in a decrease of the system efficiency, its increased heat generation, and it makes its cooling system more complicated. The reliability of such a configuration is not so high, because it depends on the reliability of one high power source supplying power to all consumers. 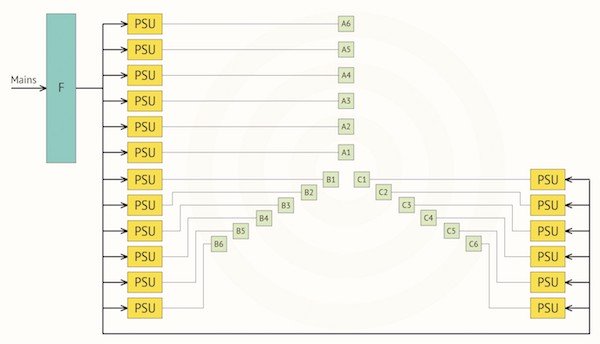 Figure 2 shows a decentralized version of AESA power supply system where the quantity of individual PSUs is determined by the quantity of TRM channels. In such system power supply of every transceiver is performed from its own relatively low-power PSU, which in its turn is supplied from onboard electrical system, generator or other input voltage source. In this case the PSUs can be placed close to their consumers, which minimizes voltage dynamical instability. Decentralization of AESA TRM power supply provides the most overall system reliability.

In case of a fault the defective cell must be separated automatically so that it does not affect the operational performance of other consumers and does not make the complete system inoperative. This makes AESA equipment the most failure proof. Apart from this, a power supply system built from relatively low-powered voltage converters may be thinner (low-profiled) compared to a PSU in a centralized configuration, which positively affects heat elimination and power supply system arrangement inside AESA. The disadvantage of such system is its high cost.

In many cases a compromise and the best alternative in terms of reli-ability, cost, and weight-and-size parameters is the partial decentralization of AESA power supply system (figure 3). In this case the power supply consumers are grouped in such a way that a TRM group fault or its power supply termination do not cause the total failure of AESA curtain. In the considered example with all TRM channels failing within one ring (for example, А1-C1, or А2-C2 and so on) the antenna remains operational with only a slight loss of sensitivity.

Voltage quality is very critical for transmit/receive AESA equipment in both transmitting and receiving modes. In receiving mode a TRM receiving section operates with reflected signals of a just few microvolts, and on a linear part of amplification any ripple, noise, and instability of power supply cause the amplitude modulation of the received signal. Similarly, in transmit mode ripple and instability can create incidental amplitude modulation power of the transmitter’s signal and non-identity of gain and phase characteristics of transmitted RF pulses. 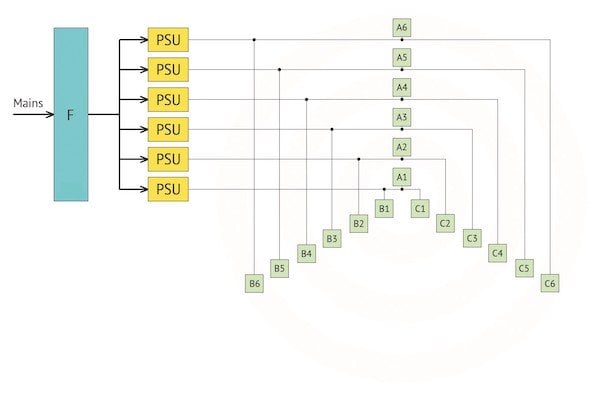 To reduce noise from PSU designers of AESA TRM power supply system can use several approaches. The most important is to use voltage converters with a low level of self-generated noise. Here the advantages of a decentralized or partially decentralized configuration of AESA power supply need to be noted because relatively low powered voltage converters normally have a lower noise level in comparison with high power PSUs necessary for a centralized system. Radiated emission is impeded by shielding voltage converters and their input and output cables, while conducted emission is blocked by using passive or active interference-suppressing filters.

To supply power to TRM units highly sensitive to noise additional linear voltage regulators of “Low Noise” and “Ultra Low Noise” categories are used, and in some power supply systems a switch-mode PSU is separated from TRM equipment during receiving or transmitting process, while the power is supplied from bulk capacitors. 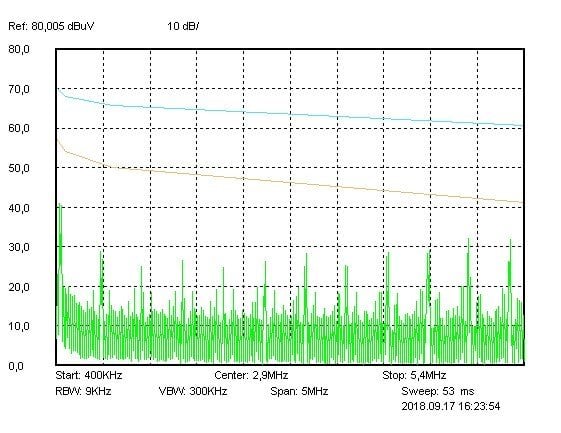 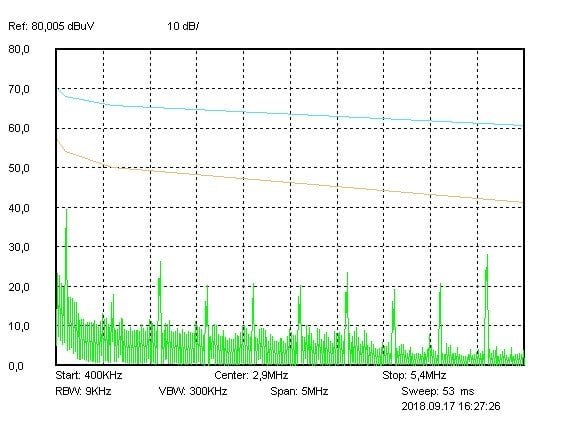 Figure 4: Conductive emission spectrograms of two PSUs: (а) without function of switching frequency synchronization and (b) with this function involved

For visual reference, Figure 4 shows spectrograms of conductive emissions of two PSUs without the function of switching frequency synchronization and with this function involved.

In the second case (figure 4b) both PSUs were synchronized from an external clock oscillator at a frequency of 500 kHz. As a result, radio interference peaks were fixed in strictly specified places that makes it possible to dispose of their influence on received signal during digital processing. In case it is necessary, for example, during radio locator operational change the PSU switching frequency can be immediately changed to reduce contributed radio interferences level in frequency bands of special importance.

Oleg Negreba is the head of research and development at AEDON company that specialized design and development of Hi-rel and compact DC/DC converters for crucial applications, which are able to operate in harsh environments and meet the most demanding customer’s needs.