High-efficiency power MOSFETs, rectifier diodes and Insulated Gate Bipolar Transistors (IGBTs) are needed to meet the requirements of power, temperature, and cost placed upon the power conversion industry. As the demand for greater efficiency overtakes other concerns, and the cost of energy continues to increase, technologies such as silicon carbide (SiC) and gallium nitride (GaN) – which have formerly been regarded as exotic and expensive – have become more cost-effective. Moreover, as markets have grown, economies of scale continue to make SiC or GaN transistors and diodes more economically attractive.

As these devices become more commonly designed-into power circuits, particularly appliance or electric vehicles (EV) motor drivers, grid feed-in inverters, and data center power supplies, designers need to consider their effects on other parts of the circuit, such as passive components like capacitors, and how these should be designed to help maximize efficiency gains and ensure reliability.

There are several mechanisms by which power semiconductors such as diodes and MOSFETs deliver significant energy savings. SiC diodes can achieve far shorter reverse-recovery time than conventional silicon alternatives, which allow faster switching. In addition, the reverse recovery charge is much lower leading to lower switching losses. SiC MOSFETs, for their part, do not exhibit the tail current that characterizes the turn-off behavior of conventional silicon IGBTs, and so can reduce turn-off loss by up to 90% while allowing increased switching frequency thereby reducing reliance on external capacitance for smoothing. Also, the wide bandgap of SiC allows high-voltage transistors to be designed with an extremely narrow channel, resulting in low RDS(ON) per unit area and so enabling SiC devices in standard power packages to offer lower conduction losses than a comparable silicon device in the same type of package.

The combination of simultaneous low switching and conduction losses, with high breakdown voltage, allows the design of efficient high-voltage circuits that have low distribution currents and associated I2R losses. This is increasingly important in circuits such as data centre power supplies, as servers demand higher power to handle increasing compute loads that come with trends such as greater numbers of subscribers, consumer demand for streaming services, growing reliance on Cloud analytics and storage, and the effect of the burgeoning Internet of Things (IoT).

Design-in Effects on Other Components

Because wide bandgap devices allow higher operating voltage and higher switching frequencies, lower external capacitance values are needed for filtering and smoothing voltage and current ripple. On the other hand, high operating frequencies demand extra care when laying out the circuit, to minimize unwanted effects such as inductance in PCB traces or cables.

As far as the demands on capacitors are concerned, although the required capacitance values may be lower, high voltage ratings are needed as well as small case sizes because power circuitry is often subject to extreme size constraints: for example, Cloud-server designers want to maximize board real-estate for processors and FPGAs to handle high compute loads, while EV designers demand small inverters to aid with overall packaging of the vehicle.

Designing in wide bandgap semiconductors (WGS) also requires components to withstand higher ambient operating temperatures. SiC or GaN devices can operate at a higher temperature than conventional silicon devices, with equivalent reliability. SiC-based semiconductors in the market today can operate at over 200°C with voltages in the range 400V to 3500V. System designers can take advantage of this to simplify thermal management and hence reduce overall cost and size: a smaller, lower-cost heatsink can deliver significant economies for an appliance maker; data-center operators can benefit from lower server room air-conditioning costs or a smaller-capacity EV-inverter cooling system can help reduce vehicle weight and cost.

Demand for capacitors capable of operating up to 200°C has typically been confined to specialist markets such as defense or down-hole drilling. Various capacitor technologies have been applied, such as tantalum capacitors with liquid sulphuric acid electrolyte. These are not suitable for widespread use in consumer equipment. Although tantalum capacitors with safe solid electrolyte have been developed in surface-mount packages rated for operation up to 200°C, these are typically available with voltage ratings of 10V to 35V and in an EIA 7343 case size that makes them most suitable as bulk capacitance.

Multi-Layer Ceramic Chip Capacitors (MLCCs) have been developed for down-hole drilling applications, featuring precious metal inner electrodes to allow temperature ratings of 260°C or higher. However, from a cost perspective, precious metal technology is not desirable in consumer or high-volume applications.

KEMET has developed MLCC’s rated for operation up to 200°C, featuring C0G dielectric and nickel Base-Metal Electrodes (BME), delivering a cost-effective alternative in voltage ratings of 200V as well as 500V and 2000V to meet the needs of the down-hole drilling market. These devices benefit from low leakage current, low dissipation factor, low ESR and ESL, and relatively long lifetimes at temperatures up to 300°C. Moreover, the effective capacitance has been shown to change very little with temperature or applied voltage, thereby assuring designers of stable capacitance and high reliability at sustained high operating temperatures.

Figure 1 shows the results of a comparison between a 33nF, EIA 2824 surface-mount nickel BME C0G capacitor, and a 10nF radial-leaded 500VDC X7R precious-metal electrode capacitor, over temperature, with a continuous 500V DC bias applied. When voltage is applied, the capacitance of the X7R capacitor falls by 25% of its rating. At 200°C, the capacitance is more than 50% lower than the specified nominal value. In contrast, the BME MLCC C0G capacitor displays minimal capacitance change across the entire temperature range.

In addition to high-temperature capability and stable capacitance, BME MLCCs can also be designed to minimize capacitance loss and device failure due to cracking of the MLCC layers as the board substrate flexes. For applications where there is a high mismatch in the coefficient of thermal expansion (CTE) between the capacitor and PCB substrate, leaded or stacked capacitor packages can tolerate greater flexing or mechanical stresses.

In the TLPS process, an alloy that has a low melting point reacts with an alloy that has a higher melting point to form a metallurgical bond between two surfaces. KEMET utilizes two TLPS processes for assembling high-temperature capacitor packages for its KONNEKT technology. One of the TLPS processes is based on copper-tin (CuSn) alloys, reaches a maximum sintering temperature of 300°C for 30 seconds, and has been used to bond the leads of radial and axial conformal-coated MLCCs. 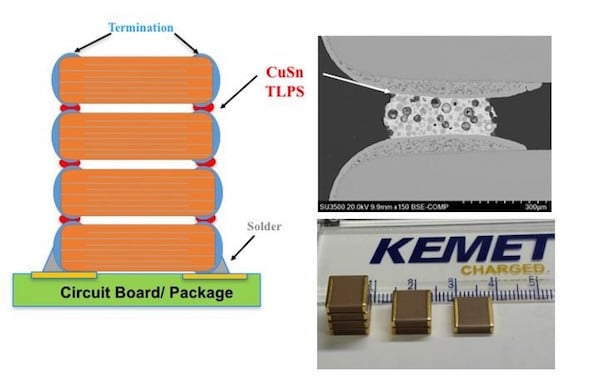 When compared with capacitors assembled using conventional soldered or welded leads, the SnCu TLPS interconnects have maintained high shear strength at the over-molding process temperature of 275°C, whereas the soldered and welded joints have displayed minimal shear strength. An alternative process based on indium-silver (InAg) alloys has also been developed, which increases immunity to embrittlement in larger components such as stacked MLCCs.

WBG Power Transistors and Diodes will Increase in Use

Reggie Phillips holds a degree in ceramics engineering from Clemson University. He has over 25 years of experience with KEMET as an R&D development engineer and a product line manager.