Electrostatic discharge (ESD) is a frequent menace to electronics. During an ESD event, an amount of charge is transferred from one object to another, e.g., from a person to an integrated circuit (IC). This charge transfer can result in a very high current passing through the IC within a brief period, damaging the device if it cannot dissipate the energy quickly.

ESD can hit the devices throughout the product lifetime, during manufacturing and assembly, by the end-user, or in maintenance.

ESD protection is mandatory for electronic components, and its design is of prime concern in the semiconductor industry. For a reliable operation, the ESD protection should be considered both at the component level as well as the device level.

A set of standards document the ESD qualification tests to guarantee the reliability and certify the systems and components. They specify the testing procedure, test equipment calibration, and routine verification.

This section addresses the component-level tests. Passing these tests is a prerequisite to obtaining the certifications of a product and bringing it to market.

The models or tests for ESD events that may take place in components in daily life – each representing a particular physical phenomenon – are:

The human body model (HBM) happens when a charged person touches a component with a finger. Initially developed for the mining industry, this is the oldest ESD test – it simulates the transfer of charge from a finger to an integrated circuit pin with other pins grounded.

Recent data shows that HBM seldom emulates actual ESD events. Latest-generation package styles are regularly too small for people to handle with their fingers, and the  manufacturing process for most large components employs automated equipment, so people hardly touch the components. 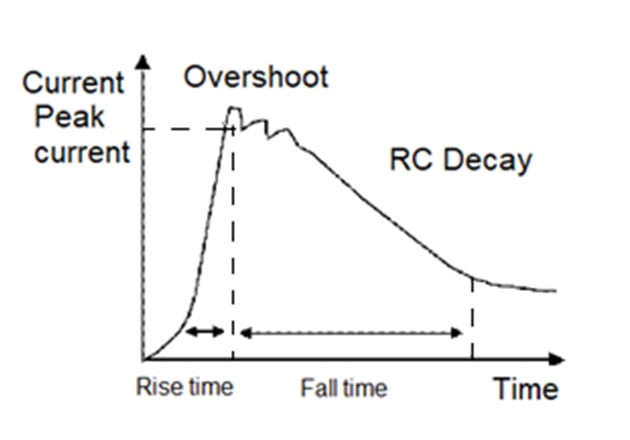 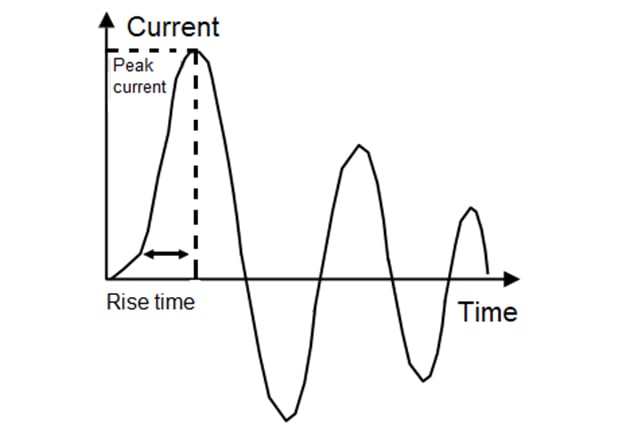 In the HBM and MM models, the charge is transferred to the component.

The CDM model replicates in-house and customer IC failures at the component level. It determines an IC’s vulnerability to an ESD event where a charged package discharges through a grounded metal object. Currently, such discharge events are the leading cause of ESD failures in modern circuits. 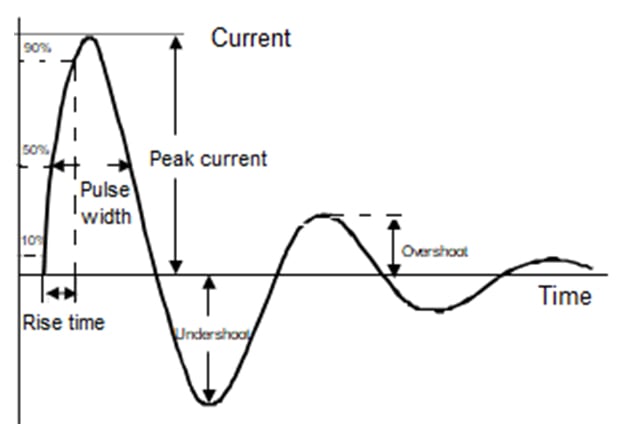 This testing method is an equivalent or a substitute for the HBM methodology and can also measure or characterize the ESD performance. 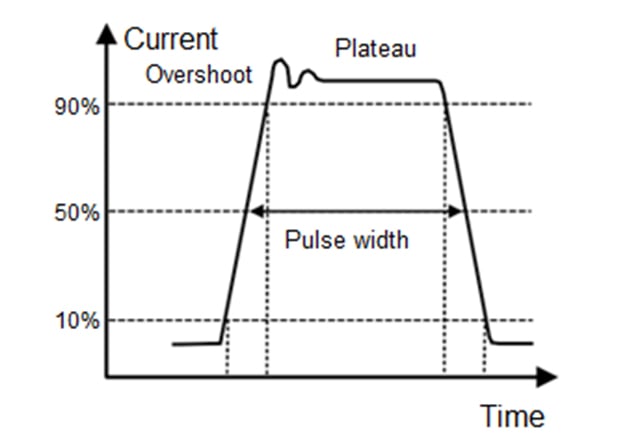 ESD failures are disastrous and can lead to instant malfunction of IC chips.

Junctions and oxides are prone to damages. The basic mechanisms for ESD induced failure are:

During the event, the protection circuitry clamp the pins to a low voltage. They return to the off-state after discharging the current. The ESD event must not damage the device.

When on-chip protection is not possible due to the technology limitations, off-chip protection solutions – located in cables, connectors, ceramic carriers, or circuit boards – are useful. In some cases, custom solutions designed with optimized approaches may cut costs.

An ESD protection device should comply with four characteristics:

There are different techniques to build protection clamps. Their choice depends on the technology and design restrictions. Three devices commonly used as the ESD protection devices are:

Diodes have the simplest structure and meet the requirements for low-voltage ESD applications when forward-biased. Operating under this condition, they are one of the best ESD protection elements – exhibit low turn-on voltage, low on-resistance, and handle high ESD currents.

Grounded-gate n-channel MOSFETs (GGNMOS) are commonly used to protect CMOS-based designs against ESD events. These devices have a structure and operation similar to that of normal MOS; however, they employ different layout techniques to have optimized performance as an ESD protection device.

The silicon-controlled rectifier (SCR) is the most efficient ESD protection device in terms of its high robustness, owing to its bipolar conduction mechanism.

A drawback is its tendency to latch-up – conduction of current after the ESD event ends. With the right design, they can provide outstanding ESD performance at a tolerable latch-up risk.

Note that while diodes are non-snapback-type devices, SCRs and GGNMOSs have snapback characteristics.

The ESD protection strategy consists of clamping the overstress voltages and using on-chip protection structures to provide a discharge path for ESD currents.

The on-chip ESD protection circuits are included to protect the input, output, and power pads against ESD events.

These protection elements remain passive during regular operation of the protected device and activate only in the presence of an ESD pulse – by detecting the rise time and the overvoltage. When an ESD pulse is detected, the protection circuitry will provide a safe discharge path for the ESD current.

Figure 5 shows a typical design where the ESD protection circuits are added to the input, output, and power terminals 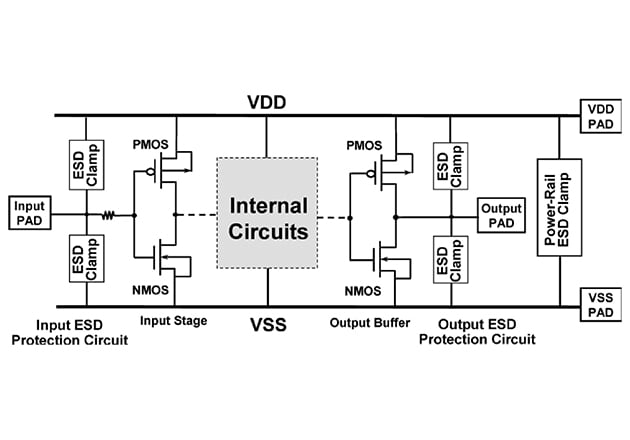 This network consists of the following protection components:

The ESD protection techniques are employed with all significant processes, including CMOS, BiCMOS, and III-V compounds.

A Review of Grounding ICs

The electrostatic discharge (ESD) phenomenon occurs due to a transfer of electrostatic charges between two objects with different electric potentials; it damages the ICs due to the substantial and quick dissipation of energy.

The ESD protection methods shunt the ESD currents through a safe discharge path, dissipate the energy in the ESD devices, and clamp the voltages at a safe level.

It is critical to verify the ESD immunity and the reliability of a circuit design. The significant component level standards are the human body model (HBM), the machine model (MM), and the charged device model (CDM).