The magnetic powder cores based on atomized Fe-Si-Al particles were widely used in inductors due to their low core loss, high performance in DC-Bias, and so on. However, the Fe-Si-Al particles are too hard as steel balls to be molded with high green density body. Adding organic additives into powders could improve mold method and adjust the powder fluidity, and the density and strength of green cores were significantly improved.

Powder magnetic cores, using metal alloy powder such as Fe-Si-Al (Sendust), are a kind of soft magnetic material or called soft magnetic composites (SMCs). The materials are fabricated by compacting a mixture of resin or other nonmagnetic powder and magnetic alloy powder coated with a thin insulator film. The materials have the following advantages: isotropic magnetic properties, high electric resistivity, therefore their particular magnetic and electrical properties. As an important part of soft magnetic composites, FeSi-Al soft magnetic powder cores have been widely used in many electromagnetic devices, such as the reactor, the choke, the filter, the inverter, etc. [1-2]. 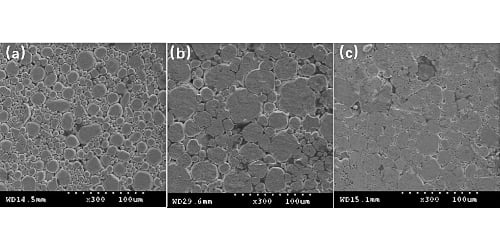 Table 1. Additives (include simple code) and the content of each Number presents (wt.%).

The atomized Fe-Si-Al powders with sizes <75 μm were commercially purchased. Phosphate insulation coating was applied in this work. The powders were firstly passivated in phosphoric acid solution, containing 2.5 wt% phosphoric acid, and 3.5 wt% alcohol, for 40 min and dried at 85 °C for 20 min. The insulated powders were then blended with 1 wt% - 10 wt% zinc stearate, additives presented in Table 1, and compacted into toroidal cores, with the outer diameter of 26.92 mm, the inner diameter of 14.73 mm, and the height of 11.00 mm at 1628 MPa. The three kinds of formaldehyde resin, seen in Table 1 were added to the powders as compared samples and stirred to dry when using solvent. Powders were pressed into toroidal cores as above. The cores were finally annealed in nitrogen atmosphere at 730 °C for 30 min.

The sample’s morphology was characterized by a scanning electron microscope (SEM; Phenom Pro X). The core inductance, usually presenting the permeability μe of core, at the frequency (f) 20 kHz and the percent inductance (% μe) at 20 kHz under the DC magnetizing field 100 Oe were measured by an LCR meter (Chroma). The core losses were measured at 50 kHz with the maximum magnetic flux density Bm of 1000 Gs by a power loss tester (BST-2). The strength of cores was measured by a tension meter. All magnetic measurements were carried out at room temperature.

In powder metallurgy processing of mechanically soft magnetic materials, porosity is normally controlled by the compaction pressure. When the pressure is fixed, porosity is controlled by soft magnetic powder and additives (usually non-magnetic mater). Figure 1 shows the morphology of Fe-Si-Al cores in site microstructure, mainly particles are spherical. The sample only with lubricant (Additive 1=L, Table 1) inner was presented firstly, seen in Figure 1(a), in which the particle boundary is continuous and clear, due to the lubricant burned off during heat treatment. Meanwhile, the morphology of the other two cores, adding silicon resin 1 (Additive 2=S1) and silicon resin 2 (Additive 3=S2), show compacted particles and few residing materials in it, because the additives S1, S2 could remain in poles through the heat-treatment, through them ferreting the strength of cores. But it should be clear that adding non-magnetic materials would decrease the permeability as many studies present  [3,4]. As for the difference in the resins (S1, S2, Table 1), it is the different mechanism in strengthen, that additive S1 is a kind of high temperature silicon resin, however, S2 resin was usually recognized as a lower temperature kind of resin. When all types of resins were burnt at 730°C, and decomposed into different materials, performing a strengthening role or destroying the microstructure in cores [4]. This process variable is relative to changing the compaction pressure and the amount of plastic deformation in the particles, which would also affect the hysteresis loss.

Several additives as presented in Table 1 have predictable influences in properties of the cores due to their intrinsic quality. Figure 2 (a) shows the density of each sample after heat treatment, in different conditions corresponding to variable content of lubricant, and resin, all being nonmagnetic materials. Obviously, resin 1 (additive, S1) has a large influence on the density of the cores, especially with beginning content increasing, for example, a larger decrease in density of S1 content 4 wt.% and 6 wt.%, almost 0.23g/cm3 down of density (or in a ratio of 3.6% down), while the followed increase of resin 2 (S2) has little effect, for example, from 5.85g/cm3 to 5.79g/ cm3. It is also clear that other additives (S3) have few effects in decreasing density compared to resin 1(S1), which is due to little room occupied by those materials, for example, disappeared by high temperature to burned (S3).

Table 2. Decrease of original induce upon each additives effect.

Density shows an obvious influence on induce value as shown in Figure 2 (b). In Figure 2, the higher induce is not found in the core without any additives besides the lubricant, otherwise, the resin 2 (S2) in the core contributes to higher density resulting in increasing induce as found in Figure 2(b). With increasing the contents of each additive, induce value decreases as shown in Figure 2, which matched the rule of decrease in induce with increasing content of nonmagnetic additives. It also should be pointed out that the cores with resin 2 (S2) added show a more obvious decrease in induce, as the effect of resin 1 (S1), but density is not influenced by resin 2 (S2). This may result from the pressing procedure, because resin 2 (S2) dissolved in a solvent and then added to SMCs powders, few spaces were occupied by the organic compound in a liquid state.

DC-bias properties have great importance on the core using an inductor, especially the metal powder core has a special quality, big DC electrical current, low induce decrease, which is a benefit to DC/DC change [3]. In Figure 2(c), the relation between induce decrease under cores applied DC current (called DC-bias) and the content of the additives is displayed. First, the very important relation is that the decreased degree of induce along with the content of additives, as shown by the curves, for example, the with resin 1 (S1) and without resin in cores, the beginning decrease is 27.9% and 25.8%, displaying the additive S1 negative effect to DC-bias. Although the degree of DC-bias would be close after the additives add more and more, the lower induce value was found in resin 1 (S1) cores, which was focused on inducer applier. To achieve good DC-bias property, a suitable content of additives like resin or other agents should be chosen correctly, according to total data collection.

Another factor for cores used as inductors is the total loss in core. The losses decreased with the non-magnetic volume fraction up, as seen in Figure 2(d). But there are turning points for each additives curve, that’s the 8% in lubricant (additive L), resin 1 (S1) and resin 2 (S2) curves. A special phenomenon was found that the turning points concentrate at the third point for each content of additive, which appears in random without any predesign. All the data of content for additives are displayed in Table 2. Those are important data to make choice while designing an inductor [5].

Additives influence not only electromagnetic properties of cores but also the physical characteristics, such as the strength, explored in Figure 2(e). Obviously, the strength of cores after adding resin 1(additive S1) shows much higher values, almost triple of other additives in remaining cores. Usually, strength is the total effect of pressing and annealing, due to particles gap and connection beginning from that. In powder metallurgy processing of mechanically soft magnetic materials, porosity is normally controlled by the compaction pressure. In this paper, three kinds of resin (S1, S2, S3 as in Table 1) were used to increase the strength or fill the gap, getting higher density of cores. Organic resin adhesives, such as polypropylene, epoxy resins and phenolic resins, have been used as coating materials. However, due to their poor temperature toleration, the phosphating-resin materials cannot be annealed above 600 °C. The second resin in Table 1 are developed due to its good heat resistance, which enables stress relief at higher temperatures (700°C) without a large increase in eddy current. To avoid such interference, and supposing that pores are just non-magnetic regions in the material, different volume fractions of “pores” could be produced by adding non-magnetic particles to the SMCs powder. 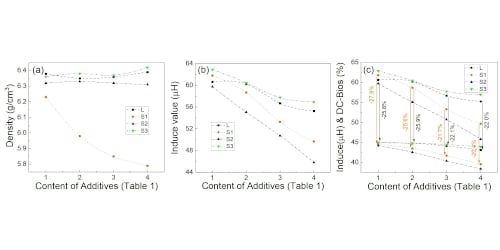 Figure 2. Physical and electromagnetic properties of cores with different additives (a) Densities of the cores after heat-treatment; (b) Inductance; (c) Decrease of inductance under DC-bias applied; (d) Total loss of the cores; (e) Strength of the cores pulled abruption. Image used courtesy of Bodo’s Power Systems

The Fe-Si-Al magnetic cores using spherical atomized powders were prepared. The influence of the additives on the core’s electrical and magnetic properties was investigated. It was found that increasing the percentage of each additive resulted in the decrease of induce (effective permeability) and the improvement of DC-bias performance. With increasing the percentage of all additives resin, the core loss at the frequency 50 kHz continuously decreased. The increase in the hysteresis loss was used to explain the deterioration of the loss due to more gaps. Excell magnetic properties, namely the DC-bias (100 Oe) of up to 74 % and the lowest loss (50 kHz/1000 Gs) of 120 mW/cm-3, were finally achieved in the Fe-Si-Al powder cores.

This work was financially supported by the Dongyang Industrial Innovation Foundation.