Various power electronics applications demand high-precision power (current and voltage) measurement of such characteristics as the power conversion efficiency of power conditioners, the efficiency of inverters and motors, and reactor losses. This paper narrows the focus of the discussion to current measurement methods and introduces some of Hioki’s expertise as a longstanding developer of both current sensors and power analyzers leveraging proprietary technologies.

Power analyzers generally measure current by means of either the direct connection method (Figure 1[a]) or the current sensor method (Figure 1[b]). The following provides a detailed description of the characteristics of each approach. 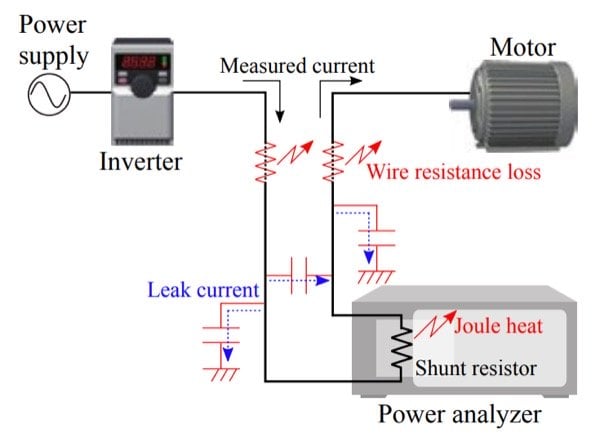 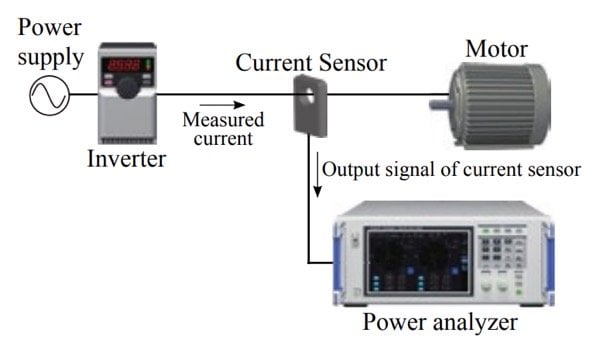 In the direct connection method, current is measured by routing wires from the measured object to the power analyzer and connecting them to the instrument’s current input terminals.  The measurement principle itself is extremely simple, with the advantage of enabling a power analyzer to be used to measure current on a standalone basis, making it the de facto method for many years.  However, since the current wires must be routed over a long distance and the current input portion of the power analyzer must be inserted into the measured object’s circuit, the following disadvantages exist:

For example, concerning the effect described in ii) above, a 5-meter run using No. 6 AWG wire would have a wire resistance of approximately 6.5 m2. If the current under measurement were 30 A, the loss resulting from this wiring resistance would be 5.85 W. Although it is impossible to make any judgment concerning the magnitude of the loss based solely on this value, it would be too large to ignore for some measured power values.

In addition, when using the direct connection method, current usually is measured by means of a shunt resistance. This shunt resistance method suffers from the following disadvantages: 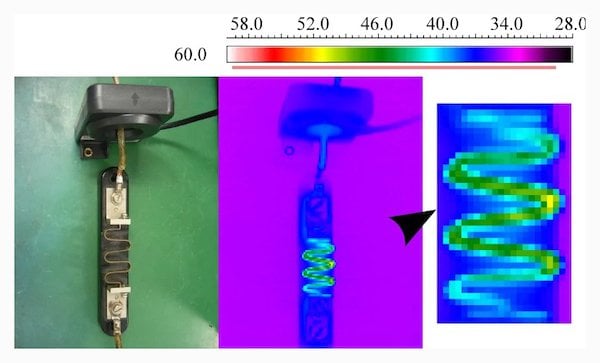 Figure 2 illustrates the process of self-heating that occurs when a current of 20 A flows through a 2 m shunt resistance. For comparison purposes, a Hioki CT6862 current sensor with a rating of 50 A has been connected to the circuit. You can see that the temperature of the shunt resistance rises to about 50°C due to self-heating caused by Joule heat. By contrast, the current sensor is mostly unaffected by Joule heat and associated self-heating, and instrument loss and effects of the sensor’s own temperature characteristics on measurement precision are negligible.

As demonstrated by the above discussion, the direct connection method is well suited for the measurement of very small currents of about 1 A where the effects of the shunt resistance’s Joule heat are sufficiently small, for example measurement of the standby power of electronic devices or measurement of the power consumption of LED lighting.

The current sensor method is a method for measuring current whereby a current sensor is connected to the wires on the equipment under test, and the output signal (current or voltage) from the sensor is input into the power analyzer.

The current sensor method can be used to measure a target in its operating state, and the almost complete lack of self-heating when measuring large currents means that there is no effect on measurement accuracy. The current sensor method is better than the direct connection method at measuring large currents of about 5 A or greater with a high degree of precision, and it is generally used in the power electronics field.

Figure 3 illustrates the approximate range of current values that can be measured with a high degree of precision and the associated general frequency band for both the direct connection method and the current sensor method. Please note that just because a value falls outside the range shown in the figure does not necessarily mean that it cannot be measured using the method in question. 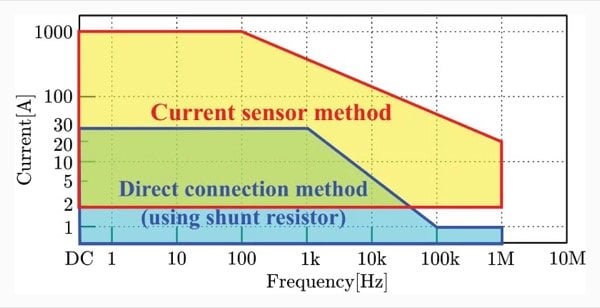 Figure 3: Direct connection method and current sensor method: Approximate ranges of current values and frequency bands that can be measured at high precision *Exclusion from the ranges shown in the figure does not necessarily mean a value cannot be measured.

As described above, it is typical to use the current sensor method when measuring currents in excess of 5 A. While the current sensor method does not suffer from the same disadvantages as the direct connection method, there are nonetheless a number of precautions that must be borne in mind in order to measure current at a high level of precision. This section outlines those precautions.

A sufficient level of caution is required when selecting a current sensor. In particular, concerning consideration iii), amplitude and phase accuracy for most current output sensors are only defined for DC and 50/60 Hz frequencies, and accuracy for other frequency ranges is provided only for reference purposes only.

It is important to note that high-precision current measurement using the current sensor method hinges on the availability of both current sensors and a power analyzer with an adequate level of performance. 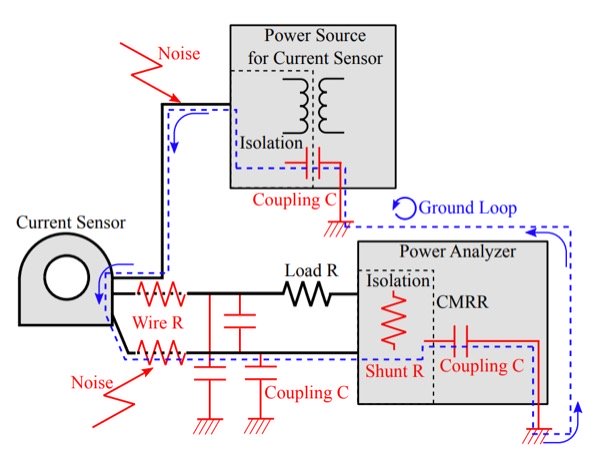 The following conditions must be satisfied in order to ensure that the current sensor’s output signal can be transmitted to the power analyzer without degradation.

On the other hand, Hioki is the only test and measurement instrument manufacturer in the world that independently develops and designs both current sensors and power analyzers, giving us the ability to deliver all of the components necessary for building a complete power measuring system.

Furthermore, Hioki subjects current sensors and power analyzers together to evaluations of measurement accuracy and noise testing both in-house and by third-party certification authorities.

By carefully designing each individual element and qualifying them in combination in order to optimize the system as a complete set, Hioki is poised to deliver a world-class power measurement system to our customers. 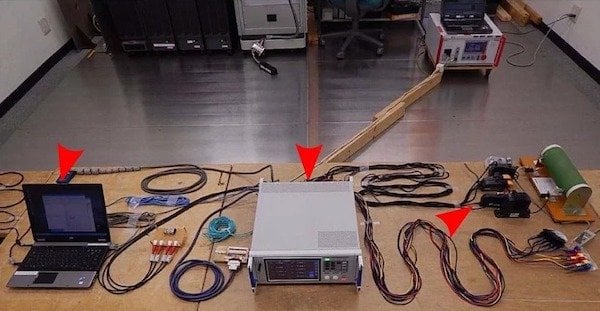 In addressing high-precision power measurement as required in a variety of settings in the power electronics field, this paper focused on current measurement methods and briefly introduced some of Hioki’s expertise as a longstanding developer of both current sensors and power analyzers leveraging proprietary technologies. Due to the constraints of space, it was unable to cover, or was only able to mention in passing, many of the more detailed aspects of this subject. Hioki looks forward to providing similar information to readers in the future.

Hajime Yoda works as the Assistant Chief Engineer, Hiroki Kobayashi works also as an Assitant Chief Engineer and Shinya Takiguchi works as a Senior Staff at Hioki E.E. Corporation, A Japanese electrical measuring equipment developer and manufacturer based in Ueda, City, Nagano Prefecture. The company was first established in June 1935, and registered as Hioki E.E. on January 5th, 1952