Given the emergence of new trends in automotive electronics such as autonomous driving and car infotainment systems, system designers are facing new challenges when designing automotive front-end power systems. Discrete reverse-battery protection solutions like Schottky diodes and P-channel field-effect transistors (FETs) are no longer a viable solution for the 100- to 1,000-W power levels required in electronic control unit (ECU) designs due to their poor efficiency, need for thermal management and the space they consume on a printed circuit board.

Reverse-battery protection activates when battery terminals are incorrectly connected during jump start, vehicle maintenance or service because a connection error can damage the components in ECUs if they are not rated to handle reverse polarity. Reversebattery protection is an important feature for semiconductor components that operate directly from a vehicle battery.

There are various solutions available to realize reverse polarity protection. A common solution is series diode in the positive path, and another is a P-channel metal-oxide semiconductor field-effect transistor (MOSFET)-based architecture. However, ideal-diode controllers driving N-channel FET-based reverse-battery protection circuits are gaining wider acceptance because of system-level benefits in terms of efficiency, size and cost, along with the ability to comply with EMC-compliant testing limits. Figure 1 compares these three solutions and lists their performance benefits. 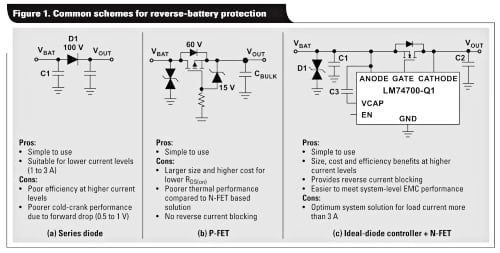 International Organization for Standardization (ISO) 7637-2, ISO 16750-2, Japanese Automotive Standards Organization A-1 and Society of Automotive Engineers J1113-11 all specify automotive electrical line transient’s behavior and impact. Apart from these automotive industry standards, many automotive OEMs have their own standards. One such standard is LV 124, which was drawn up by representatives from Audi AG, BMW AG, Daimler AG, Porsche AG and Volkswagen AG. Figure 2 illustrates some of the tests specified in LV 124.

All reverse-battery protection devices must meet system-level tests. Some tests, such as LV 124 E-06 (superimposed alternating voltage) and E-10 (short interruption) are very hard to meet with diode and P-channel FET-based reverse-battery protection solutions. The LV 124 E-06 test applies a superimposed alternating voltage while the engine is running. This test requires an AC peak-topeak ripple as high as 6 V on a 13.5-VDC battery voltage, swept from 15 Hz to 30 kHz. The LV 124 E-10 test applies short interruptions at the input, typically for a duration ranging from 10 µs to few milliseconds to check whether electronic modules are immune to short interruptions in the battery supply. Such interruptions can occur due to events such as contact and line errors or bouncing relays. To achieve functional pass status A, electronic modules must function properly with up to 100-µs interruptions in input power.

To achieve active rectification of a 6-V, 30-kHz peak-topeak AC input voltage during the E-06 test, and to meet class A performance during the E-10 test, having the gate turn off and on quickly is a very important feature. This article addresses specific challenges when implementing a single gate-drive, ideal-diode controller that can comply with LV 124 E-06 and E-10 test requirements. 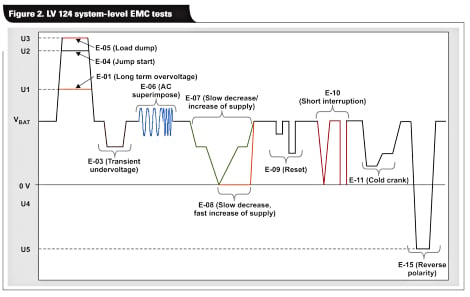 When applying a superimposed alternating voltage to the system, the output bulk capacitor (C2) charges to the peak input voltage. Whenever the input voltage falls below the output voltage, the ideal-diode controller detects a reverse current and turns off FETs Q1 and Q2. When the input voltage rises higher than the output voltage, the ideal-diode controller needs to turn on both FETs quickly, a process that requires charging the gate capacitance greater than the threshold voltage (VT) of both FETs. The minimum charge pump drive strength required to realize active rectification is given by Equation 1.

where QG1 and QG2 are the total gate charge for FETs Q1 and Q2, respectively, and fSW is the AC superimpose frequency of the E-06 test.

Equation 1 shows that the total gate charge needed to turn on the FETs is a combination of the individual gate charges of FETs Q1 and Q2. This gate charge varies with the drain-tosource voltage across the FET at the turn-on time. Because a single gate-drive architecture drives two FETs at the same time, this architecture requires a charge pump with a higher gate-drive strength. As mentioned previously, this is one of the specific challenges associated with implementing a single gate-driver architecture. A charge pump with insufficient drive for both FETs can result in skipped cycles during active rectification, as well as higher power losses across the FETs caused by increased switching losses and higher input peak currents during the E-06 test. The single gatedrive architecture also results in a higher output-voltage droop during E-10 testing, resulting in inferior system performance.

The LM74800-Q1 rectifies the superimposed alternating voltage (the E-06 test) by controlling DGATE, turning Q1 off quickly to cut off reverse current, and turning Q1 on quickly during forward conduction. Q2 remains on, as it is controlled by the HGATE driver stage. Having Q1 operate as an active rectifier while keeping Q2 on effectively reduces the output-voltage droop to a maximum of the body-diode drop only, and also results in improved powersupply rejection ratio (PSRR) performance when compared to a single gate-drive architecture. Charge pump loading is reduced by half compared to a single gate-drive architecture.

The minimum charge pump drive current required to realize active rectification is given by Equation 2.

where QG1 is the total gate charge of Q1 and fSW is the AC superimpose frequency of the E-06 test. Because only Q1 turns on and off during E-06 and E-10 tests, the peak current required to charge the gate is lower than it is for a single gate-drive architecture. Due to Q1 switching, the Miller region is very minimal due to the drain to-source voltage transition from the body diode drop to I × RDS(on). The total charge (QG) follows a dotted line, as shown in Figure 4.

Table 1 shows performance comparison of single and dual gatedrive architectures with respect to the minimum charge-pump and current drive strength required to achieve an active rectification. The main cause of permanently superimposed alternating voltages in the electrical system is the energy transformer (e. g. alternator or a DC-DC converter) that powers the electrical system. AC superimposed frequency of up to 30 kHz usually comes from an alternator and 200 kHz from a DC-DC converter. The comparison in Table 1 considers commonly used N-FETs with a total gate charge of 13 nC at a gatedrive voltage of 6 V and an AC superimposed frequency of 30 kHz and 200 kHz.

Figure 5 shows performance comparison of single and dual gatedrive architectures when subjected to LV 124 E-06 and E-10 test. Test conditions under which performance is captured for each architecture is also highlighted in Figure 5. 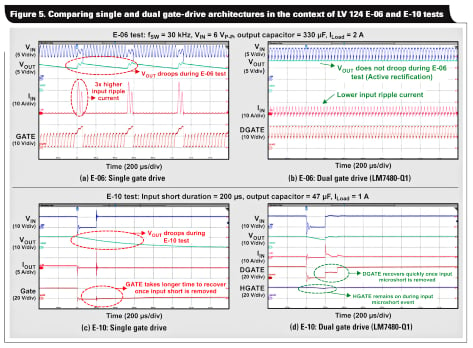 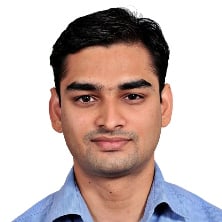 Dilip Jain is a systems manager at Texas Instruments responsible for defining products such as Ideal Diode controllers, >40V eFuses and 100V smart high side controllers. He has 13 years of broad experience in power management domain with expertise in power supply design and circuit protection for Automotive and Industrial power. He holds a master’s degree in Electrical Engineering from the Indian Institute of Technology Bombay, India. 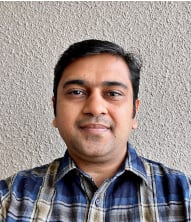