In previous Ni-Zn battery systems, zinc is partly soluble in the alkaline electrolyte, and it dissolves to produce zincate anions. This partial dissolving can result in shape change, capacity loss, and dendritic growth.

ZAF engineered a negative electrode that contains nucleation and migration stabilization additives that work together with a novel electrolyte to stabilize the zincate ion. This mitigation strategy boosts the cycle life of the Ni-Zn battery, while retaining a greater portion of the initial capacity. 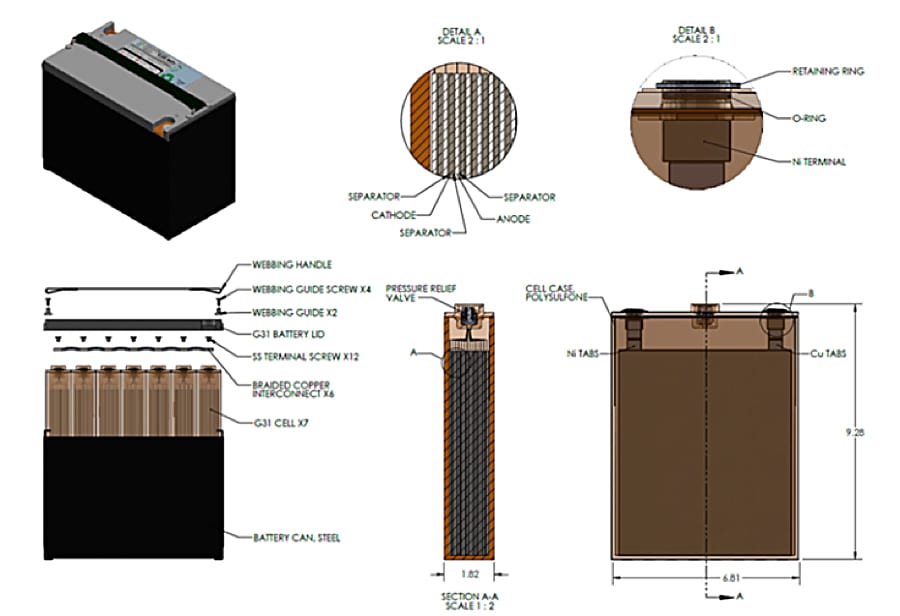 Previously, Ni-Zn batteries were constrained to low volume applications because of the manufacturability of the chemistry. Critical build parts such as electrodes could not be scaled for high volume and automated manufacturing.

ZAF uses 3D current collectors and commonly employed slurry casting methods that have enabled the Ni-Zn chemistry to be scaled from a low rate, handmade process to a high-volume, reel-to-reel process.

A typical failure mode encountered in the cycling of Ni-Zn cells is the loss of electrolyte or dry out because of the production of oxygen and hydrogen from the decomposition of water.

ZAF's negative electrode is mostly made of zinc oxide that is doped with nucleation, migration stabilization, and hydrogen suppressant additives. The company engineered the zincate nucleation additives to preserve a stable zinc structure throughout the life of the electrode. The migration stabilization additives work with ZAF's electrolyte to stabilize the zincate ion, and the hydrogen suppressant additives minimize gassing, which reduces dry out in the battery.

The company believes that Ni-Zn batteries provide a viable and safe alternative to lithium-ion and lead-acid counterparts. ZAF also claims that improved safety is one of the most significant advantages of the Ni-Zn battery, which makes this technology an ideal candidate for a variety of applications.

"I initially joined ZAF as a technical advisor to conduct due diligence on the NiZn technology for projects I was working on," Kurt Salloux, ZAF's CTO said.

"Kurt's industry knowledge and technical expertise has changed the trajectory of our development team. He has led the team on an innovative electrode design, which resulted in the potential to double our projected cycle life. The magnitude of this improvement is that it will allow nickel-zinc to compete with lithium-ion without the safety hazards in many applications," Randy Moore, ZAF's president and CEO, said.

Kurt Salloux holds a Ph.D. in materials science/electrochemistry with over 30 years of experience in science, engineering, research, development, and construction of advanced power and energy storage systems. Dr. Salloux was a research manager for Hughes Space and Communications working on the lithium-ion battery program for Hughes and later Boeing's next-generation satellite systems. Kurt was most recently involved in building advanced power and monitoring control systems for global telecommunication carriers.

"After working with the technology development team, I saw an opportunity to introduce this innovative electrode process to drive improved cycle life. We rapidly validated the performance and I saw an opportunity to impact the telecommunication, data center and utility markets with NiZn batteries. This led to the discussions with the leadership team to join ZAF as the Chief Technology Officer," Kurt Salloux said.

"We are now in the process of moving this innovative technology out of the lab and into our Joplin production facility and expect to be delivering batteries in Q3 to key customer projects," Salloux added.

"We continue to build a world-class team and we are pleased that Kurt has brought his years of experience and industry connections to the company. His background in telecommunications, data centers, utility and microgrid/distributed power provides us a unique opportunity to more effectively tailor our engineering and development efforts into these key markets," Randy Moore stated.