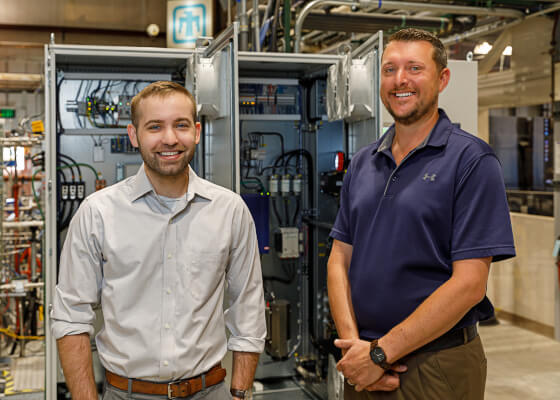 The American engineer, George Brayton, invented the Brayton cycle in 1872. Brayton was best-known for his work with internal combustion engines.

The Brayton cycle consists of a compressor, combustion vessel, and turbine. Flowing air is compressed in one chamber and fuel in another. The two chambers link to the combustion vessel, where the air and fuel react under constant pressure. Energy from the reaction is used to mechanically power the turbine, while captured energy from expanding gas can also lead to electric power generation.

Enhancing the Conversion of Heat into Energy

Sandia has developed a thermal-to-electric energy conversion technology (based on a closed-loop Brayton cycle) that is more efficient than the traditional steam-based Rankine cycle.

Instead of steam, Sandia’s mechanical engineering team used a non-toxic, non-flammable, chemically stable, and low-cost material known as S-CO2 in the closed loop conversion system. Under immense pressure, S-CO2 acts like a liquid and a gas and can generate more heat (at 1,290 °F or about 700 °C) than steam.

In Sandia’s closed-loop Brayton cycle, the S-CO2 is heated by a heat exchanger, and energy is extracted from the CO2 in the turbine. Upon exiting the turbine, the CO2 is cooled in a recuperator before moving into a compressor. At this stage, the S-CO2 reaches the appropriate pressure before coming into contact with waste heat in the recuperator. 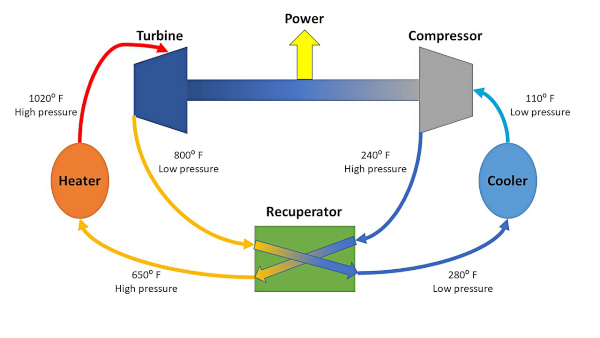 Following this step, the S-CO2 returns to the heat exchanger to repeat the cycle. A recuperator is used to preheat compressed air by redeeming heat from the exhaust gas of a turbine— this reduces fuel consumption and improves efficiency.

During testing, the Sandia team provided nearly 1 hour of power to the Sandia-Kirtland grid while producing as much as 10 kilowatts.

In a news release, the project’s lead researcher, Darryn Flemming, said, “We successfully started our turbine-alternator-compressor in a simple supercritical CO2 Brayton cycle three times and had three controlled shutdowns, and we injected power into the Sandia-Kirtland grid steadily for 50 minutes.”

Instead of directing the power into load banks, the Sandia engineers could supply power, if only a small amount, to the local grid. The team saw this as an important step on the road to more efficient power generation and provision.

The Sandia research team's next step was to connect the closed-loop Brayton cycle test loop to the local grid. The team turned to a top-tier manufacturer of automation products, KEB America. In particular, the Sandia team was interested in KEB’s elevator system technology. The company’s R6 Line Regen unit allows energy generated from counterweighted traction elevators to be funneled back into the building power.

With the knowledge that these elevators use similar equipment “to that used in the Brayton cycle test loop,” the Sandia engineers modified the power electronics systems within the elevators to allow their test system to feed energy into the grid. This is something that the team has never done before.

In the same news release, a mechanical engineer from Sandia, Logan Rapp, commented, “You can draw a pretty clear line from the work we’re doing at 10 kilowatts to about one megawatt. One megawatt is pretty useful; it can power 500-1,000 homes or replace diesel generators for remote applications. Our industry partners are targeting 1- to 5-megawatt systems.”

Turning up the Heat

The Sandia team plans to further modify their system for operation at higher temperatures (1,000 °F and higher) to provide power with even greater efficiency. By 2023, the team aims to improve system efficiency by “getting two turbine-alternator generators operating in a recompression configuration on the same system.”

By 2024, the team hopes to demonstrate a 1-megawatt S-CO2 Brayton cycle system.