Electric vehicles (EVs) are penetrating the market, with sales doubling year over year in 2021. This growth has led to many emerging technologies directed toward developing high-efficiency EV systems, especially batteries. However, Tokyo Institute of Technology researchers report the main reason for EV inefficiency is inaccurate battery charge estimation.

In a battery-powered EV, it is crucial to have information about the battery charging and discharging cycles, and current sensors are the primary source of this data. A battery management system's ability to effectively manage energy depends on the accuracy of the sensor inputs. Sensor accuracy is critical for achieving high system efficiency, especially at lower currents.

Precise current measurements are also useful during the charging cycle of EVs for billing purposes and over and undercurrent protection.

Usually, the current levels in an EV can reach up to hundreds of amperes. The current sensors that detect such large currents have a limited resolution and can measure the discharge current with a 10% error margin. Such ambiguity leads to an inaccurate charge and driving range estimation. Therefore, the driving range can be stretched by up to 10% with accurate sensors.

A Tokyo Institute of Technology research team, led by Professor Mutsuko Hatano, has developed a diamond quantum sensor-based detection technique to estimate the battery charge with 1% accuracy while measuring high currents. The new sensor can detect currents in the milliampere range and are compact enough to be suitable for automobiles.

Quantum sensors use properties of quantum mechanics, such as quantum entanglement and quantum states squeezing for precise sensors. There are various methods for quantum illumination or particle detection to improve the detection of weak signals.

Such sensors are generally built for dynamic systems and often rely on optical states of light and quantum mechanical properties. They can also be useful for non-photonic applications, for example, in measuring electric fields by observing trapped ions.

Quantum current sensors, specifically diamond quantum sensors, absorb light at specific frequencies and then re-emit them at different frequencies. The re-emitted light intensity depends on the magnitude and direction of the external magnetic fields, which are closely related to the current flow. Usually, such sensors have quantized energy levels and use quantum coherence (interference between two wave-like particles oscillating at certain frequencies) to measure a physical quantity.

Researchers developed a diamond quantum sensor with 10 mA resolution. This feat is achieved by the diamond nitrogen-vacancy (NV) center that offers high sensitivity, a wide operating range and dynamic range, and the ability to eliminate the effect of temperature drift by monitoring multiple frequencies.

Diamond current sensors with 10 mA resolution had been proposed earlier but could not accept several hundred amperes. The team of researchers introduces differential detection using two diamond sensors on both sides of the busbar and mixed analog-digital control for microwave frequency generator to detect resonance frequencies over a wide dynamic range.

Two sensors on the sides of the busbar eliminate the environmental magnetic fields as a common mode, and the metal busbar blocks the microwave and fluorescence interference between the sensors, ensuring high accuracy. 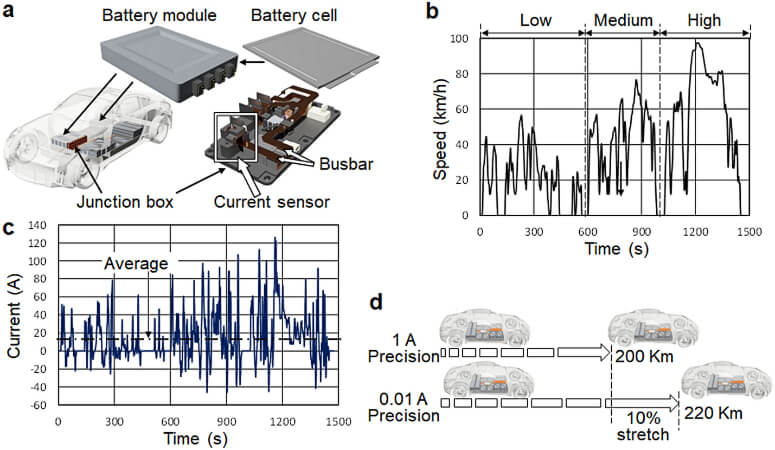 To test the sensor, the researchers applied a current pulse train externally with an amplitude of 100 - 1mA to confirm if 10 mA of current can be detected in the presence of noise. They further evaluated currents up to 130 A for linearity and fluctuations. They also tested for operations up to +- 1000 A from an external current source. 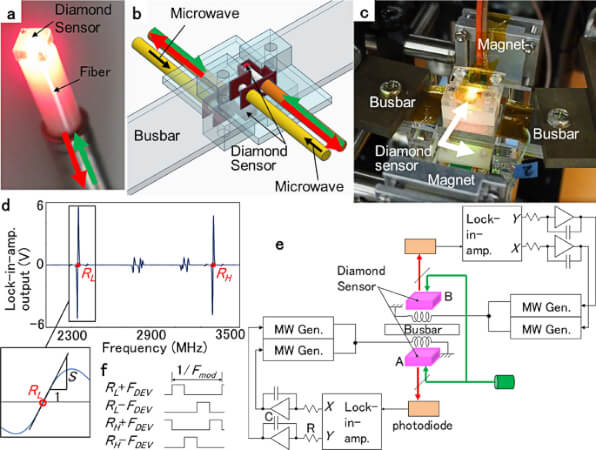 Hatano said, "Increasing battery usage efficiency by 10% would reduce battery weight by 10%, which will reduce 3.5% running energy and 5% production energy of 20 million new EVs in 2030 WW. This, in turn, corresponds to a 0.2% reduction in CO2 emissions in 2030 WW transportation field."