Researchers at KAIST have developed a piezoelectric energy harvester along with a simple fabrication and testing process allowing it to be easily and cheaply integrated into wearables.

Wearable devices are products of great interest, but currently their growth is being stunted by complex and expensive fabrication procedures. This problem is paired with the lack of testing to prove durability, an extremely important parameter when considering wearable devices. However, a research team at national research university KAIST, led by Professor Seungbum Hong, has developed a novel product and procedure to tackle these issues. 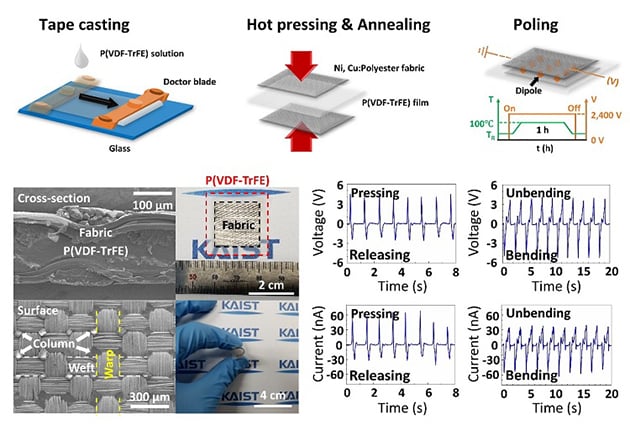 According to the abstract published by Hong’s team, they have developed a fabric-based wearable piezoelectric energy harvester. It is a piezoelectric bender that generates signals from human motions and from force test machine pressing. The device has a strong longitudinal piezoelectric coefficient, also known as the d33 coefficient, which is a measurement of the amount of stress (movement of the piezoelectric element) per volt. These are paired with some novel mechanical properties that allow for easy fabrication methods.

According to a KAIST press release, the device has a polymer film that, when heat pressed to a fabric such as polyester, will infiltrate the gaps of the woven fabric and attach to the surface giving incredible adhesive strength.

In this case, the pressing results in a record high interfacial adhesion strength of 22 Newtons per centimeter. This is an incredible feat as heat pressing onto fabric is not only a simple procedure requiring inexpensive equipment, as it is currently done for patches to be put on clothing, but it also only takes a few minutes, greatly reducing costs of labor.

Beyond the device itself, the team has produced a test and analysis system to give a more robust definition to the durability of the product. The team utilized a “surface and interfacial cutting analysis system” (SAICAS) to test the mechanic properties and their system is more precise than the current conventional methods, such as the peel test, tape test and microstretch test, because it not only quantitatively measures the adhesion strength, but also qualitatively measures it.

This study, Professor Hong says, “could enable the commercialization of highly durable wearable devices based on the analysis of their interfacial adhesive strength.”

The research is funded by multiple organizations such as the National Research Foundation and the Ministry of Science and ICT in Korea.