This new material is designed to tackle the challenges of overheating when operating power modules. Panasonic Industry’s Graphite TIM is already available on the company’s website. 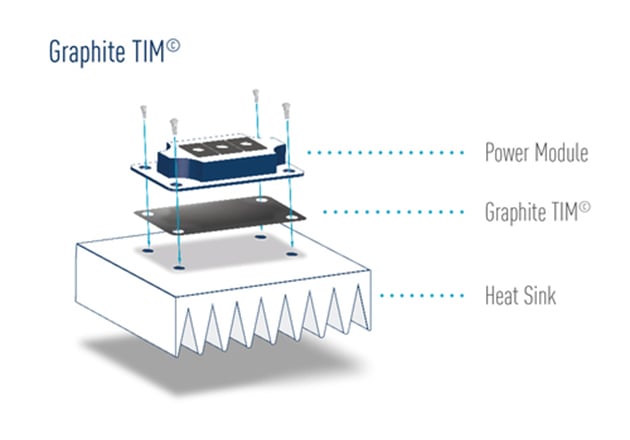 Handling heat generated by power modules in demanding industrial environments is a challenging task. The heat cannot be transferred to the heatsink well due to the voids caused by distortion and surface roughness of the module bottom.

In order to fill the voids to transfer the heat effectively, the power module is connected to a heat sink or cooling plate, which is coated with a layer of thermal grease.

Once the heatsink is disassembled, for example, the old grease needs to be cleaned up and the TIM applied again. It’s a long and labor-intensive task, after which the dry-out phenomenon may occur due to the base plate expansions and contractions.

The dry-out phenomenon is caused by the separation of oil and filler due to grease component evaporation caused by a hot, cold cycle. This, in time, causes performance degradation, and a decrease in reliability.

Panasonic addressed the aforementioned issues by introducing a Graphite TIM that can reduce the thermal resistance by filling the gap and the unevenness on the surface of both the power module and heatsink.

The TIM achieves this result thanks to its high compressibility of around 40 to 50%, which causes the voids to disappear. The thermal resistance is thus reduced and the heat can be transferred to the heat sink effectively.

This, in turn, enhances the overall thermal dissipation performance of the power module.

In addition, the new material features a thermal resistance of 0.2 K∙cm2/W (at 600 kPa) and a thermal conductivity in the X-and Y- the direction from 200 to 400 W/m∙K, respectively 28 W/m∙K in Z-direction.

Because of this, the new graphite TIM is capable of high heat transferring performance, as well as a wide operating temperature range from -55 to 400°C.

Furthermore, since graphite TIM is a sheet coating equipment, applying work is not required. The graphite TIM is directly placed between the power module and heatsink and fixed with screws.

The new components are primarily intended for applications where power modules are utilized in demanding and harsh industrial or automotive scenarios.