The MyBit token sale started yesterday, Monday July 17th, 2017, and will run for 30 days or until funding limits are achieved, whichever comes first. The goal of the crowdsale is to secure funding to finalize the development of the MyBit Platform, conduct pilot studies, and bring the product to Market. The MyBit Foundation is launching its peer-to-peer investment platform designed to connect global investors with those seeking to fund revenue generating assets such as microgrids.

The adoption of renewable energy has been much slower than anticipated; MyBit intends to change that situation. In 2015, only 2.8% of global consumption was in the form of renewable energy. Given all the benefits of renewables — clean, cost-efficient, and resilient energy, one must ask the question why — why so slow?

The reasons are many but they all center around money. Public utility companies (PUC) have invested heavily in traditional power generation plants that require economies of scale to be profitable. Abandoning them for renewables is not something they can afford to do quickly. Other reasons such as lack of competition, lack of incentives to be cost efficient and protectionist regulatory environment that are common in monopolistic environments like PUCs, further exacerbate the sluggish adoption rate of renewables.

PUC's centralized generation plants are growing old and are in desperate need of significant maintenance and upgrades. In some cases, it would be cheaper to build a new plant rather than upgrade the old. Regardless, this means rate increases for electricity to consumers and that's when things start to get political and nasty. No politician — unless they are in the heart of coal country — wants to stand behind a bond issue or rate increase to fund an expensive, traditional, non-green energy plant when renewables are an option.

Enter micorgrids. Microgrids are small, discrete energy systems consisting of distributed energy sources and loads capable of operating in parallel with, or independently from, the main power grid. They provide an excellent alternative to traditional centralized power generation plants. Microgrids can operate via renewable energy sources such as solar, are distributed and are far less costly to construct. Even better…. they can be installed on home rooftops and allow the former consumer of grid electricity to become a "prosumer" (producer and consumer) of energy and reap the economic benefits of salling of excess energy back to the utility companies.

"We should install solar panels on our homes, and generate revenue from our investment without an intermediary. This would empower people to participate in the decentralization movement". -Ian Worrall, President — MyBit.io

So, if microgrids are such a great solution, what is holding up the adoption?

The primary reason is cost. The cost of home solar systems (solar panels, inverters, battery packs, installation, wiring, etc…) has been too expensive for the average home owner to purchase. These systems average between 15-30k depending on size of home and battery back up. Many people cannot afford that amount of money. And if they could, it typically meant going to a bank, getting a loan and securing personal assets as collateral. 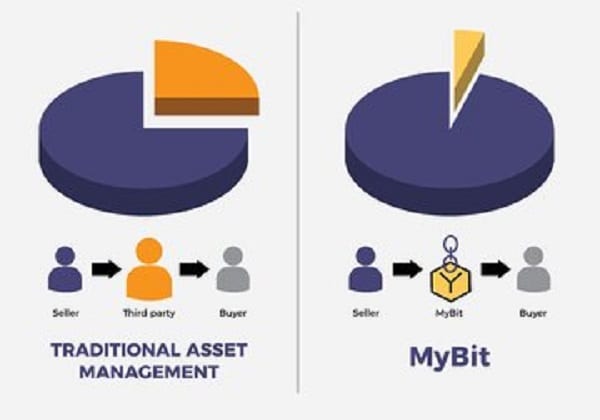 Startup MyBit aims to accelerate the massive proliferation of microgrids by connecting investors from around the world with businesses and individuals seeking to fund revenue generating assets like microgrids. No Banks, no attorneys, no middlemen required. Fast, convenient, secure peer-to-peer (P2P) transactions governed by smart contracts running on Ethereum.

MyBit believes that enabling worldwide crowdfunding of revenue generating assets will be a game changer for everyone — eliminating financial barriers to entry, enabling new business models, accessing previously untapped capital from the many and providing an extremely low cost, paperless and efficient capital market for the masses.

Future Opportunities — Economies of numbers, not scale: With the proliferation of microgrids, the economies of scale achieved by traditional power generation plants to reduce unit cost will be surpassed by economies of large numbers of interconnected microgrids resulting in an overall lowered cost structure.

This "New Generation" of energy will give rise to new value creation opportunities not possible with today's topology. New initiatives will emerge from the network edge by small and medium-sized businesses rather than from the center. The entire industry will be repurposed and with it, a more cost effective, secure and efficient grid will result.

The opportunities like the energy will be numerous, distributed and owned by the people.