The truck’s powertrain, the largest of its kind in the world, employs eight hydrogen fuel cells in parallel, a gargantuan radiator, and seven hulking lithium-ion batteries.

The vehicle, dubbed "nuGen" under the banner of Anglo American’s wider zero-emissions hauling solution, stands as high as a three-story building and weighs 485,000 pounds (or 220 metric tons), with a payload capacity of 639,000 pounds (290 tons). Under the hood, the retrofitted vehicle’s former diesel engine is supplanted by a fuel cell and battery "powerplant" with a peak capacity of 2 megawatts. 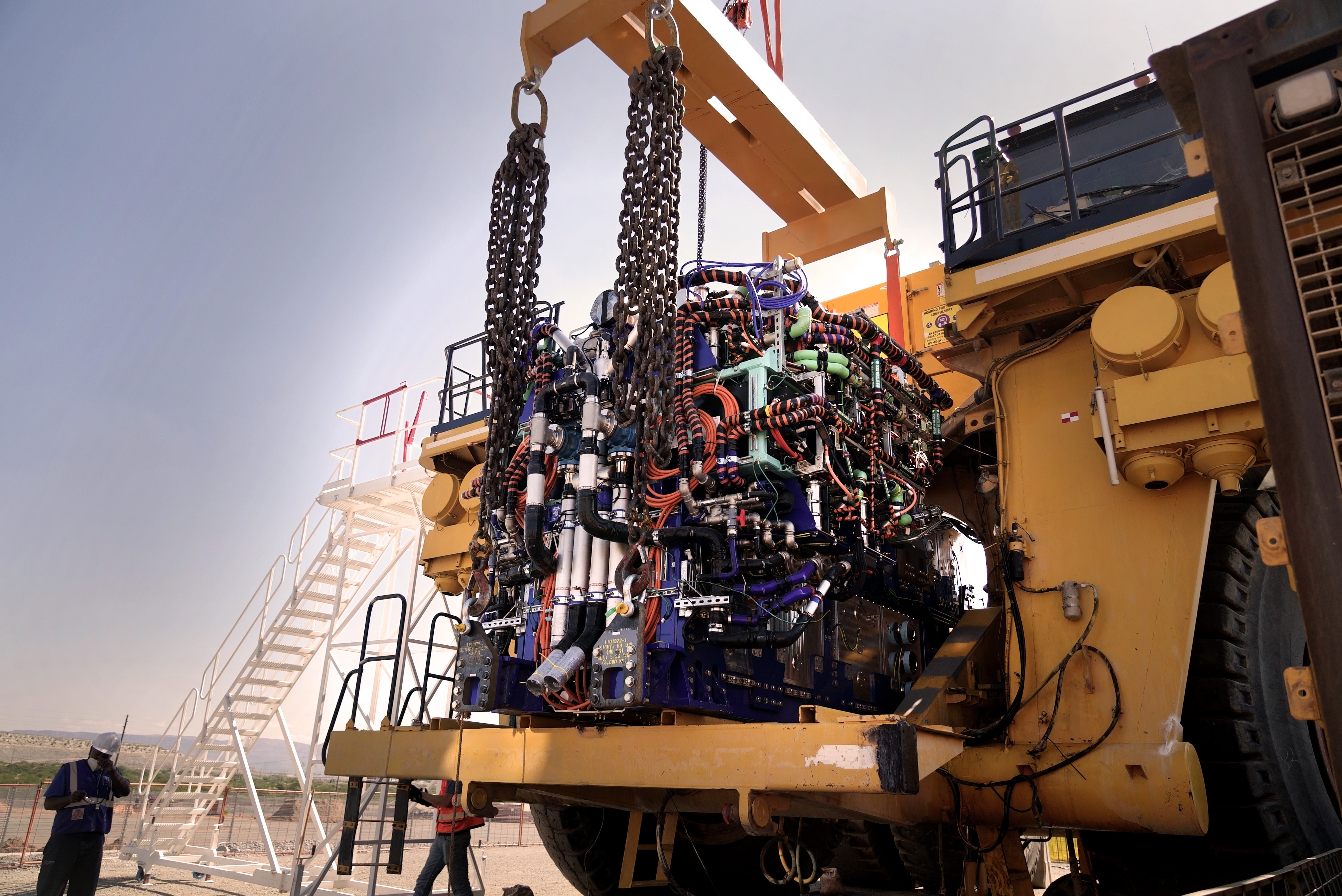 Installation of the powerplant at Mogalakwena. Image used courtesy of Anglo American

Since about half the power comes from the hydrogen fuel cell and the other half from the battery pack, the vehicle’s only emission is water vapor.

One Cog in a Complete System

To support the haul truck’s operations, Anglo American constructed a complete hydrogen production, storage and refueling complex at the Mogalakwena site, incorporating an electrolyzer and a solar photovoltaic field.

There, it will produce green hydrogen with a purity of 99.8%, enough to satisfy the requirements demanded by fuel cells, which are highly sensitive to pollutants. The complex has a daily production capacity of 1.4 tons and a storage capacity of 1 ton, allowing for on-demand refueling, said Virginia Lopez, a project manager at French energy firm ENGIE, which Anglo American tasked in 2019 with providing the Mogalakwena site its hydrogen generation, production, compression, storage, and refueling services.

The site is one of Anglo American’s trio of mining operations in the Bushveld Complex, home to about 70% of the world’s known platinum resources. The site processes and refines platinum group metals (PGMs), including palladium, rhodium, ruthenium, iridium and osmium, in addition to platinum. Because they allow catalytic converters to strip pollutants from exhaust, platinum fuel cells are seeing growing demand in the clean energy sector.

Anglo American’s nuGen project marks an early step in its “FutureSmart Mining” strategy to overhaul and modernize its mining operations. In a broader effort to achieve carbon-neutral operations by 2040, the company plans to cut its greenhouse gas emissions by 30%, improve energy efficiency by 30% and reach carbon neutrality across eight of its sites by the end of 2030.

In an industry notorious for its heavy pollution, the company views excising diesel from its trucks as key to those targets.

According to the Rocky Mountain Institute, a typical large mine hauling truck guzzles 900,000 liters of diesel annually. There are about 28,000 of these vehicles operating globally, and every year, they collectively emit 68 million tons of CO2—a footprint matching that of entire countries such as Finland and New Zealand. For comparison, the average passenger vehicle emits 5 tons of CO2 annually, per statistics from the Environmental Protection Agency. 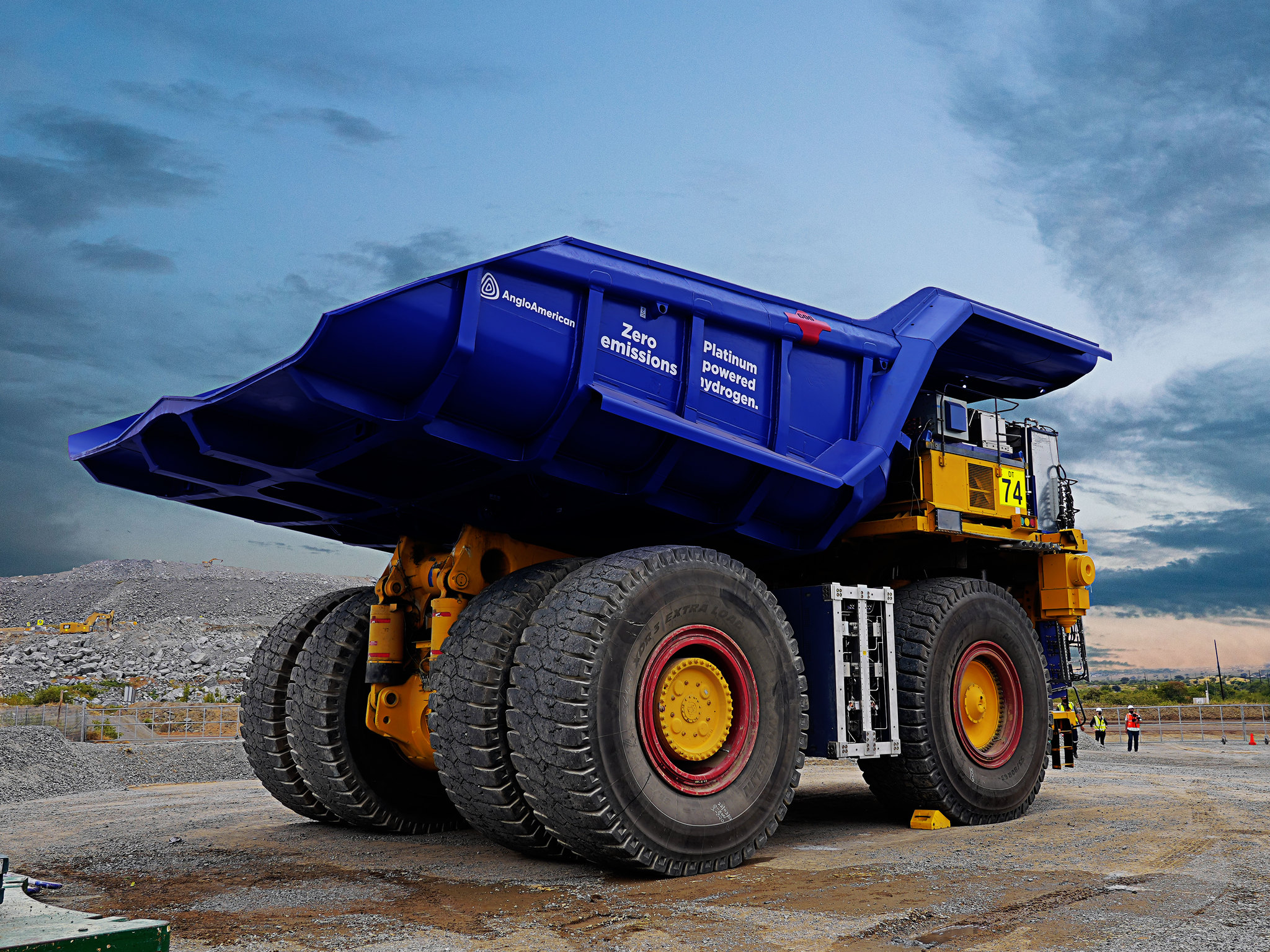 With its old engine, the nuGen truck guzzled up to 900,000 liters of diesel a year. Image used courtesy of Anglo American

With the nuGen truck prototype successfully launching at Mogalakwena, Anglo American intends to retrofit its first 40 diesel trucks at the mine, with plans in place to eventually convert its entire global fleet of 400 trucks—representing up to 80% of diesel emissions at its open-pit sites.

According to engineers from First Mode, the company behind the design and build of the truck’s powerplant, the challenge with integrating battery-run hydrogen fuel cell technology into a mine haul truck is the sheer scale and ruggedness of the vehicle, not to mention the surrounding 24/7 mining environment.

“If you take a step back and look at what we’re trying to do, it is nuts,” said Chris Voorhees, First Mode’s president and CEO, in a January proof of concept video. “It’s like a three-story off-road vehicle that needs a neighborhood amount of power to run itself.”

A behind-the-scenes of development at First Mode. Video used courtesy of Anglo American

To pull it off, the company relied on expertise from thermal, hydrogen, mechanical, electrical, software, and systems engineers, and incorporated design techniques from the oil and gas industry. First Mode engineers even turned to spacecraft design for inspiration.

As Principal Systems Engineer Josh Sweere put it, “Stitching together commercial components that were never meant to coexist simultaneously on the same platform required a lot of ‘glue’ engineering to allow the system’s various fluids, communications connections, and power connections to peacefully coexist.”

Hydrogen Gaining in Popularity Across Sectors

Though models are less ambitious, and the applications less demanding than that of Anglo American’s nuGen truck, hydrogen fuel cell vehicles are also seeing growing adoption beyond mining, particularly in the construction and trucking industries.