It sounds like magic: you put a dedicated device in contact with air, expose it to sunlight and it starts producing fuel, for free.  That is the basic idea behind the fundamental research conducted by the Dutch Institute for Fundamental Energy Research (DIFFER), in association with Toyota Motor Europe (TME).

The partnership aims to develop a device that absorbs water vapor, and splits it into hydrogen and oxygen directly using the sun’s energy. The LIFT (Launchpad for Innovative Future Technology) research proposal has now been rewarded a grant from the NWO ENW PPS Fund.

In this project, DIFFER and TME are exploring an innovative way to directly produce hydrogen out of humid air.  The motivation for this research project is twofold.  New sustainable fuels are needed to firstly decrease our dependence on fossil fuels, and secondly to lower the emission of greenhouse gasses.

One of these sustainable fuels is hydrogen, which can be used to store renewable energy.  When hydrogen is combined with oxygen in a fuel cell, the energy is released in the form of electricity, with clean water as the only emission. 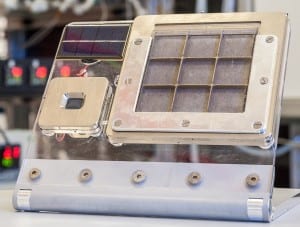 In their respective search for solutions, TME’s Advanced Material Research division met with DIFFER’s Catalytic and Electrochemical Processes for Energy Applications group, headed by Mihalis Tsampas.  This group had been working on a method to split water in the vapor phase instead of the liquid phase, which is much more common.

“Working with gas instead of liquid has several advantages,” Tsampas explains. “Liquids introduce some technical problems, like unwanted bubble formation.  Furthermore, by using water in the gas phase instead of the liquid phase, we do not need expensive installations to purify the water.  And finally, since we only use the water that is present in the surrounding air, our technology is also applicable in remote places where no water is available.”

Over the last year, DIFFER and TME demonstrated in a joint feasibility study that the envisioned principle indeed works.  The researchers developed a novel solid-state photoelectrochemical cell that was able to first capture water from ambient air and then generate hydrogen upon illumination by sunlight.

This first prototype achieved an impressive 70 percent of the performance that is obtained when an equivalent device is filled with water. The system consists of polymeric electrolyte membranes, porous photoelectrodes and water absorbing materials, combined in a specially designed membrane-integrated device.

“Pioneering the world’s first mass-produced hydrogen sedan, Toyota is also actively contributing to finding ways to produce hydrogen without the use of fossil fuels,” says Isotta Cerri, General Manager, Advanced Material Research.  “This fits in with the challenges of the Toyota Environmental Challenge 2050, aiming for zero CO2 emissions throughout the entire life cycle of our vehicles.  Hydrogen production based on renewable energy sources significantly helps reduce the emission of greenhouse gases.  With this kind of fundamental research we are working towards a hydrogen society by developing affordable and easy-to-use hydrogen applications for our operations as well as for the customer.”

In the next stage of the project, the partners intend to significantly improve the set-up.

“In our first prototype, we used photoelectrodes that are known to be very stable. But the material used only absorbs UV light, which makes up less than five percent of all of the sunlight that reaches Earth,” Tsampas explains. “The next step therefore is to apply state of the art materials and optimize the system architecture to increase both the water intake and the amount of sunlight that is being absorbed.”

When this hurdle has been overcome, the research will shift toward upscaling the technology. Current photoelectrochemical cells that are able to produce hydrogen are very small, around a square centimeter in size.  In order to become economically viable, their size must be scaled up by at least two to three orders of magnitude.

“We are not there yet, but we hope that one day, these types of systems can be used in private homes to power the house or to fuel a car for daily commuting purposes,” Tsampas envisions.