Kyocera Corporation and LO3 Energy Inc. have announced a joint project to test the feasibility of a blockchain-managed virtual power plant (VPP) utilizing a peer-to-peer distributed consensus network. The test will start Feb. 28, 2019 at Kyocera’s Yokohama Nakayama Office in Kanagawa Prefecture, Japan, where a small VPP will be installed using the company’s solar photovoltaic (PV) modules and batteries.

The energy will be controlled through LO3 Energy’s distributed ledger technology to log and manage energy flow. LO3’s blockchain technology is used for verifying and recording transactions, enabling consumer “sharing” of energy they produce with their own solar panels via a microgrid, which can reduce the burden on the larger energy grid.

“Kyocera is committed to developing low-carbon solutions that maximize renewable energy resources,” said Hironao Kudo, Deputy General Manager of Kyocera Corporation’s Corporate R&D Group. “We are excited to be the company in the area of grid management in Japan to collaborate with LO3 Energy, which has consistently proven its blockchain technologies all around the world.”

Kyocera entered the renewable energy field in the 1970s with solar photovoltaic (PV) modules and has continued to diversify its business into storage batteries and HEMS solutions.

“The need to reduce carbon emissions is exerting a profound impact on energy providers worldwide,” said Lawrence Orsini, CEO of LO3 Energy. “Using distributed ledger technologies, our networks enable the micro energy transactions needed to meet this challenge. We believe the synergies between Kyocera and LO3 Energy will produce a new generation of virtual power plants that can accelerate Japan’s transition to a low-carbon society.” 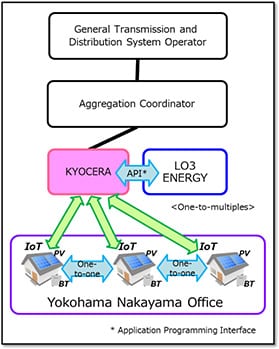 Kyocera’s solar power generating systems and storage batteries will be installed in the Yokohama Nakayama Office to simulate separate power users. The companies will further develop their VPP technology using data from IoT sensors to increase the accuracy of distributed power sources used by the project’s simulated Transmission and Distribution System Operators.

In addition, the companies will examine power-control results using LO3 Energy’s expertise in blockchain technologies that have been proven worldwide. LO3 Energy’s peer-to-peer platform helps control power generation and availability among connected users, which facilitates an effective test environment. Through this testing, the companies will develop new ways to expand the efficiency of existing energy transmission and distribution networks in Japan and worldwide.