Power converters made from gallium nitride have begun to reach the market, boasting higher efficiencies and smaller sizes than conventional, silicon-based power converters. Commercial GaN power devices can't handle voltages above about 600 Volts, however, which limits their use to household electronics.

At the IEEE International Electron Devices Meeting this week, researchers from MIT, semiconductor company IQE, Columbia University, IBM, and the Singapore-MIT Alliance for Research and Technology, presented a new design that, in tests, enabled GaN power devices to handle 1,200 Volts.

That's already enough capacity for use in electric vehicles, but the researchers emphasize that their device is a first prototype manufactured in an academic lab. They believe that further work can boost its capacity to the 3,300- to 5,000-Volt range, to bring the efficiencies of GaN to the power electronics in the electrical grid itself.

(a) Cross-sectional schematic of a device fin unit-cell and (b) side-view three-dimensional schematic of the proposed vertical GaN fin power field-effect transistors (FETs) with multiple fins. The fin length is ~1μm in the vertical direction. © IEEE (click on image to enlarge)

"All the devices that are commercially available are what are called lateral devices," says Tomás Palacios, who is an MIT professor of electrical engineering and computer science, a member of the Microsystems Technology Laboratories, and senior author on the new paper.

"So the entire device is fabricated on the top surface of the gallium nitride wafer, which is good for low-power applications like the laptop charger. But for medium- and high-power applications, vertical devices are much better. 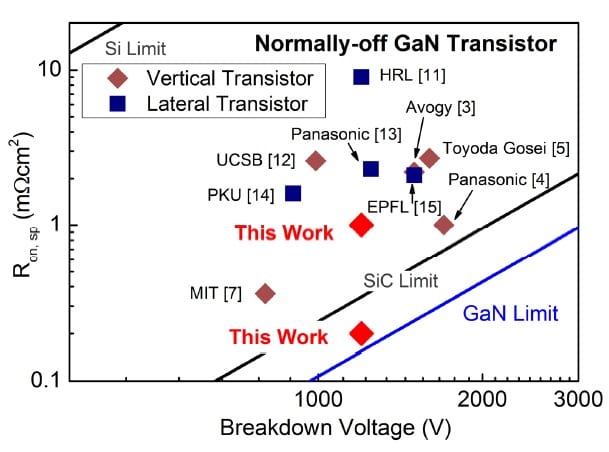 For one thing, Palacios explains, current flows into one surface of a vertical device and out the other. That means that there's simply more space in which to attach input and output wires, which enables higher current loads.

For another, Palacios says; "When you have lateral devices, all the current flows through a very narrow slab of material close to the surface. We are talking about a slab of material that could be just 50 nanometers in thickness.

Although their advantages are well-known, vertical devices have been difficult to fabricate in gallium nitride. Power electronics depend on transistors, devices in which a charge applied to a "gate" switches a semiconductor material — such as silicon or gallium nitride — between a conductive and a nonconductive state. 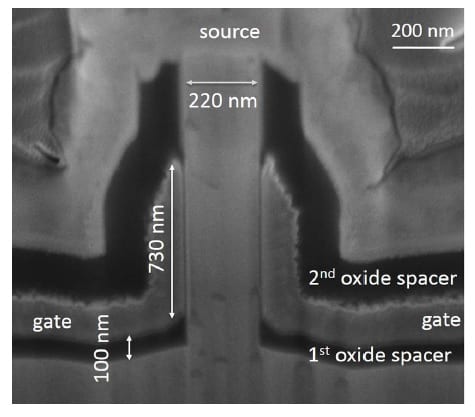 For that switching to be efficient, the current flowing through the semiconductor needs to be confined to a relatively small area, where the gate's electric field can exert an influence on it. In the past, researchers had attempted to build vertical transistors by embedding physical barriers in the GaN to direct current into a channel beneath the gate.

But the barriers are built from a temperamental material that's costly and difficult to produce, and integrating it with the surrounding gallium nitride in a way that doesn't disrupt the transistor's electronic properties has also proven challenging.

Palacios and his collaborators adopt a simple but effective alternative. The team includes first authors Yuhao Zhang, a postdoc in Palacios's lab, and Min Sun, who received his MIT PhD in the Department of Electrical Engineering and Computer Science (EECS) last spring; Daniel Piedra and Yuxuan Lin, MIT graduate students in EECS; Jie Hu, a postdoc in Palacios's group; Zhihong Liu of the Singapore-MIT Alliance for Research and Technology; Xiang Gao of IQE; and Columbia's Ken Shepard.

Rather than using an internal barrier to route current into a narrow region of a larger device, they simply use a narrower device. Their vertical gallium nitride transistors have bladelike protrusions on top, known as "fins." On both sides of each fin are electrical contacts that together act as a gate.

Current enters the transistor through another contact, on top of the fin, and exits through the bottom of the device. The narrowness of the fin ensures that the gate electrode will be able to switch the transistor on and off. 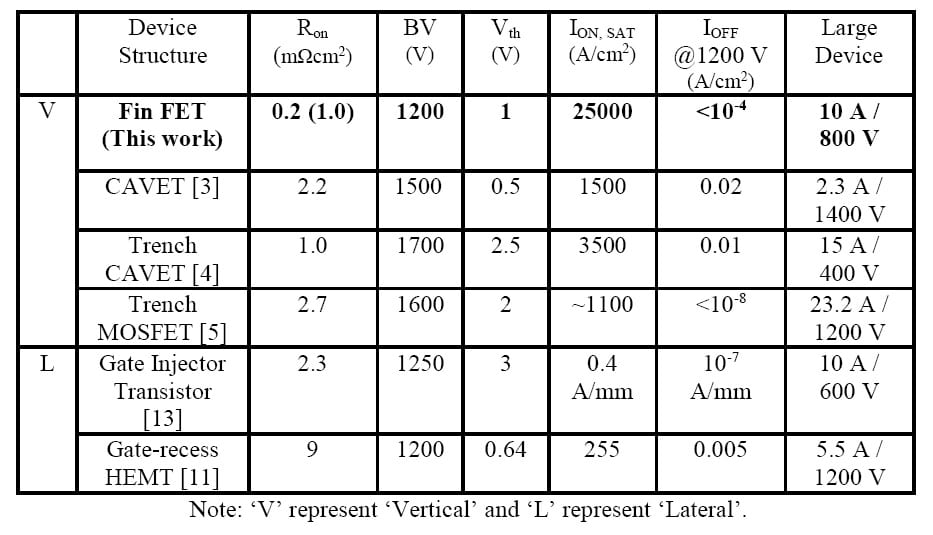 Summary and benchmark of device structures and key device metrics for the GaN vertical and lateral transistors with high current ratings reported. © IEEE (click on table to enlarge)

"Yuhao and Min's brilliant idea, I think, was to say, ‘Instead of confining the current by having multiple materials in the same wafer, let's confine it geometrically by removing the material from those regions where we don't want the current to flow,'" Palacios says. "Instead of doing the complicated zigzag path for the current in conventional vertical transistors, let's change the geometry of the transistor completely."