24M reported that investor and long-time partner, Kyocera, will install capacity to validate the unique 24M SemiSolid manufacturing platform. The facility, which is under construction in Osaka, Japan, will support pilot production of residential solar + storage systems in the Japanese market.

Using the electrolyte as the processing solvent in a binderless system, the SemiSolid platform allows the fabrication of electrodes 4-5 times thicker than conventional processes. The use of thick electrodes greatly decreases the amount of inactive materials content such as copper, aluminum, and a separator, thereby yielding tangible cost savings.

Furthermore, using the electrolyte as the processing solvent leads to the elimination of many capital- and energy-intensive steps such as electrolyte filling, solvent recovery, drying, and calendaring. The elimination of these production steps, and the reduction in plant footprint associated with the steps, leads to a capital expenditure of 30% to 50% reduction compared to conventional lithium ion batteries.

You may also like: PolyCharge Increases the Energy Density and Operating Temp. of DC-Link Capacitors

In connection with the thick-electrode-driven architecture bill of materials advantage, the reduced capital cost structure contributes to what 24M describes as an industry-leading cost of goods.

24M says that the fabrication process for its batteries use one-fifth the factory space of traditional lithium-ion batteries. Moreover, the company says that the production process makes extensive use of commercial, off-the-shelf components. 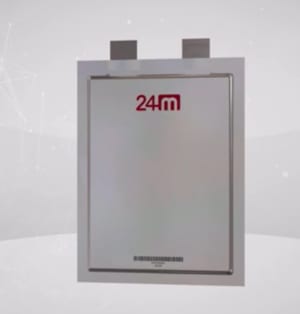 According to 24M, its batteries can be produced for low cost without giant factories, and production can be scaled with "Copy Exact" module plants. Unlike conventional lithium-ion battery manufacturing, the 24M process does not use organ solids, and 24M says that its battery technology is the most recyclable li-ion batteries ever.

"Kyocera is a long-time investor and supportive partner of 24M and we look forward to realizing our shared vision for cost-effective lithium-ion battery manufacturing," said Naoki Ota, President and CTO of 24M. "Kyocera's plans to use the 24M SemiSolid platform is validation that our low-capital, cost-effective approach is achievable at scale."