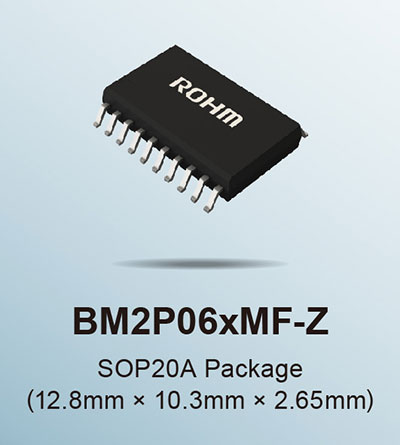 Today, AC/DC converters for home and industrial use must not only support 85V-264V AC to accommodate different AC voltages around the world, but also comply with international standards, such as Energy Star for energy savings and the IEC 62368 safety standard. It is also important for AC/DC converter ICs to be surface mount to reduce factory mounting costs. However, as high heat/high loss DMOSFETs and planar MOSFETs are still widely used in AC/DC converter ICs, until now it has been difficult to provide tens of watts of output power in a surface mount package. 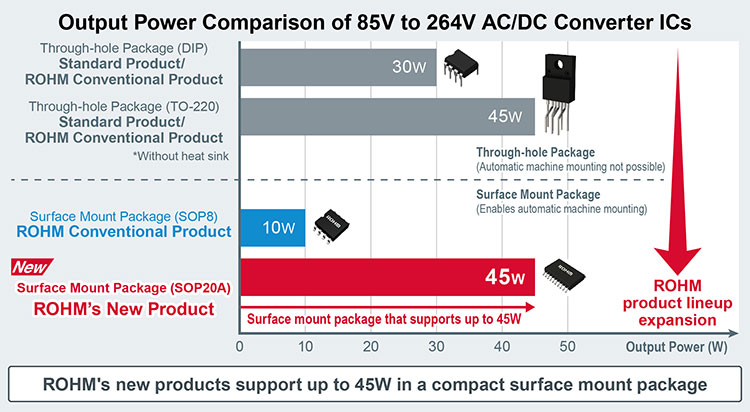 Compared to general products with equivalent performance, automatic mounting contributes to lower factory mounting costs. Moreover, ROHM is able to reduce standby power by over 90%, along with the number of power supply circuit components by four, contributing to greater power savings and higher reliability in applications.

Moving forward, ROHM will continue to deliver greater system energy savings and optimization by both developing a wide range of power semiconductors and advanced analog ICs, and by providing optimal solutions for each application.

These latest products integrate a low loss (low ON resistance) 730V SJ MOSFET, along with both startup and optimized control circuits in a compact high-heat dissipation surface mount package (SOP20A). In addition to compatibility with input voltages ranging from 85V to 264V AC, the surface mount package supports high output power up to 45W (24V × 1.875A=45W), which has been difficult to achieve in the past. It also significantly reduces mounting costs by enabling automatic mounting not possible with general through-hole types.

2. Reduces standby power consumption by 90% or more over standard products

The BM2P06xMF-Z series utilizes a control circuit (X capacitor discharge function) that leverages ROHM’s high voltage process and analog design technologies to meet the safety requirements of the IEC 62368 standard, even without a discharge resistor (which while a source of loss, was previously essential). At the same time, original low standby power control technology (which provides optimal control of the switching frequency of the power semiconductor, as well as current flowing through the isolation transformer) further reduces IC power consumption during application standby, resulting in a system standby power consumption of just 17mW (at 0W output, 230VAC). This reduces standby power consumption by more than 90% compared to general products. 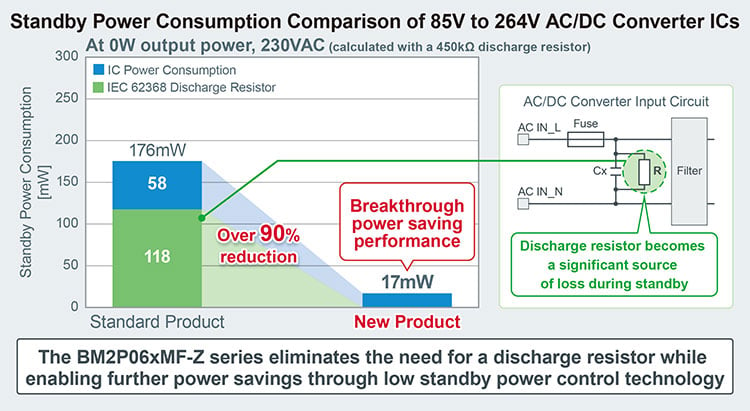 3. Decreases the number of power supply circuit components by four, along with the risk of power semiconductor failure, making for better reliability

These new products support operation over a wide VCC voltage range from 11V to 60V. The maximum power supply voltage of 60V is twice that of standard products, providing superior reliability against external noise and surge voltages. At the same time, it is possible to reduce the number of external step-down power supply circuit components typically required by four, while the internal SJ MOSFET, resistant to surge voltage [featuring an avalanche (breakdown) tolerance more than 30x higher than the DMOSFET and planar MOSFETs used in general products] contributes to higher system reliability by reducing the risk of power semiconductor failure. 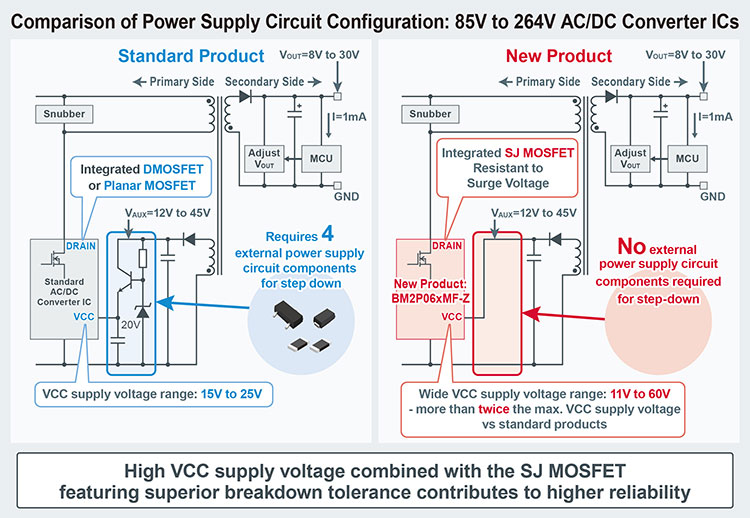