The fresh additions consist of 45, 60, 100, and 200–V rectifiers, available in both automotive-qualified and standard versions, all of which are housed in Nexperia’s new Clip-Bonded FlatPower (CFP2-HP) package.

The rectifier batch includes six trench Schottky rectifiers, split into pairs rated at 45 V, 60 V, and 100 V, with one per pair able to handle average forward currents of 1 A, and the other 2 A. This subgroup includes the PMEG100T20ELXD-Q, a 100 V, 2 A trench Schottky barrier rectifier.

In a category of its own, Nexperia has also included the PNE20010EXD-Q, a 200 V, 1 A semiconductor purposed to applications requiring hyperfast recovery. 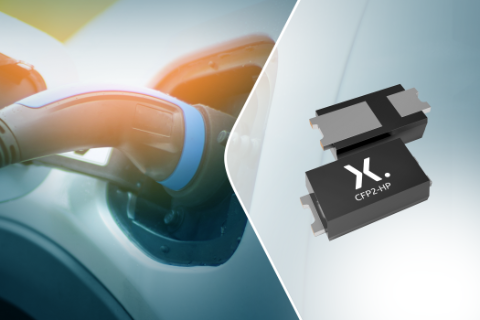 Given the sheer quantity of products contained in this latest release, it's impossible to cover the full breadth of the batch here. So in lieu of a comprehensive dive, we’ll instead provide some background discussion before narrowing our focus to these two rectifiers, as Nexperia chose to highlight them in its announcement release. For those interested in the full lineup, a complete list is available on Nexperia's CFP2-HP product page.

The Need for Miniaturization in Automotive Electronics

Today’s cars feature fewer ECUs, but because these complex systems are responsible for controlling more of the vehicle, from the front and rear axles to general body control, they require far greater component density than did their predecessors. 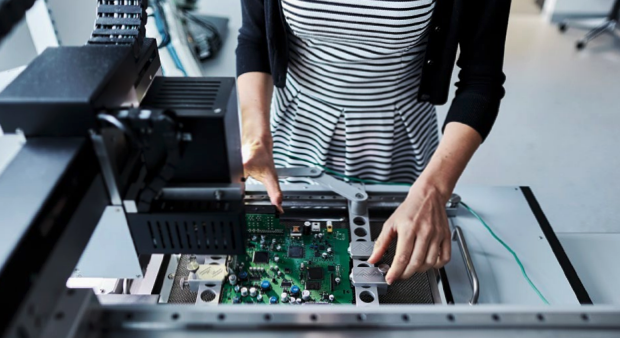 In response, manufacturers are increasingly utilizing multilayer PCBs such as that of Nexperia’s CFP2-HP, whose vertical thermal designs allow engineers to save up to 3/4ths of the board space that would be occupied by an SMA-packaged device, the company said. What’s more, the CFP2-HP package offers the same level of electrical performance as its less-dense peers, Nexperia said, while its lead shape allows for improved automatic optical inspection (AOI), and its “rugged” package design enhances board level reliability and extends operating times.

The Transition to Smaller Component Packages

Nexperia intends to be the vanguard of the transition to smaller packages such as the CFP.

“Nexperia has invested heavily to expand its capacity to serve the growing demand for CFP-packaged products [and] stays well ahead of market projections for the next three years,” said Frank Matschullat, product group manager for Nexperia’s Power Bipolar Discretes unit. “These diodes are the latest additions to over 240 CFP-packaged products which Nexperia currently offers.” 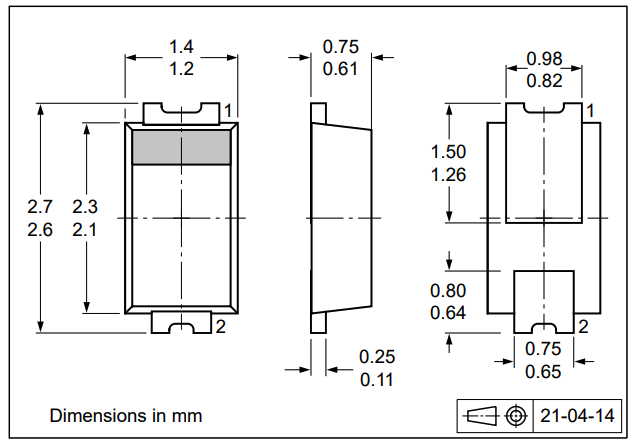 An outline of the CFP2-HP package. Screenshot used courtesy of Nexperia

Nexperia currently employs CFP packaging with power diode technologies including Schottky, silicon germanium, and recovery rectifiers, with potential use extending to bipolar transistors. Offerings include single and dual configurations capable of working with average currents ranging from 1 A to 20 A.

The PMEG100T20ELXD-Q and the PNE20010EXD-Q are both AEC-Q101 qualified devices ensconced in CFP2-HP (SOD323HP) power flat lead SMD plastic packages.

Both rectifiers operate over temperature ranges of -55 to 175 ℃, and both devices feature a maximum power dissipation of 0.65 W.

Thermal resistance from junction to ambient in free air for each device must be specified as either 230 K/W or 125 K/W, depending on factors described in the their respective datasheets.

The  PMEG100T20ELXD-Q is a trench Schottky barrier rectifier with an exposed heatsink for optimal thermal connection. It features low forward voltage and leakage current, as well as low Qrr and IRM. Thanks to clip-bonding technology, it also sports high power capability. In addition, the 100 V, 2 A device features a typical forward voltage of 810 mV and a maximum pulsed reverse current of 0.6 uA.

The PNE20010EXD-Q features a “hyperfast” recovery time (trr) of under 25 ns. The 200 V, 1 A rectifier is fabricated via high-efficiency planar technology and features low inductance. This rectifier sports a typical forward voltage of 880 mV and a maximum pulsed reverse current of 75 nA.