The new devices feature an overcharge detection accuracy of ±15 mV and draw a maximum of 990 nA when operational.

The new S-82M1A, S-82N1A, and S-82N1B series are designed to protect 1-cell lithium-ion and lithium polymer rechargeable batteries from hazards including over-discharge, overcharge, and overcurrent. 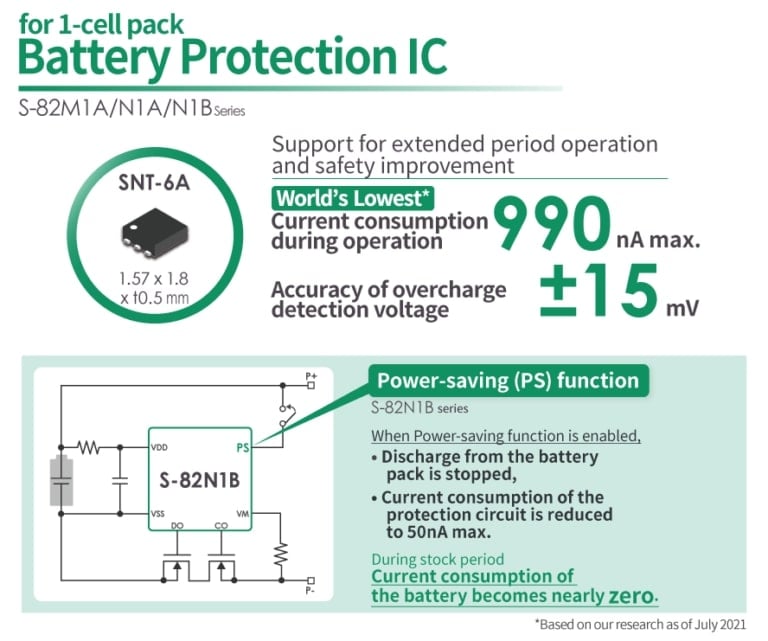 Contributing to Safety and Longer Times between Recharges for Wearables

Just like the powerful 100+cell lithium-ion batteries (LiB) used by EVs, the tiny 1-Cell LiBs found in small mobile devices also need to be protected against hazards. In the case of the latter, hazards include overcharge voltage and current as well as discharge overcurrent and undervoltage.

All members of the three series feature ±15 mV detection accuracy of overcharge. They draw a maximum of 990nA, which the company touts as the world’s lowest. The nearest competitive device, as cited by ABLIC, draws 2500nA.

These features reduce battery consumption and, during product storage or non-use, they will serve to prevent deep discharge and extend battery life.

As depicted in the introductory image, members of the S-82N1B series feature a power-saving (PS) function. When PS is enabled, discharge from the battery to the load is halted. The battery protection IC itself will draw only a scant 50nA.

The S-82M1A series devices employ an external sensing resistor to ensure that the highly accurate overcurrent protection capability is not overly susceptible to temperature fluctuations. There are three members in this series. They differ on specifications such as overcharge and over-discharge detection voltages and the presence or absence of a power-down function.

Members of the three series of devices are used to protect 1-cell lithium-polymer and lithium-ion rechargeable battery packs used in:

ABLIC began in-house development and fabrication of CMOS ICs in 1970 for incorporation into the world’s first practical quartz watches. Since then, the company has provided small, low-power analog semiconductor products for a wide range of consumer, mobile and automotive devices as well as for medical equipment.

In January 2016, ABLIC became independent of Seiko Instruments Inc., and it has been operating as a maker of analog semiconductors under its current name since January 2018. In April of 2020, ABLIC became a member of the MinebeaMitsumi Group.

ABLIC’s strength still lies in low-current, low-voltage, ultra-small package technologies. As is the case with protection ICs for LiBs and for automotive memory products, many of the company’s product lines hold some of the greatest market shares in the world.

Analog semiconductor products will continue to play a critical role amid the accelerating progress being made in the shift to electronically enhanced vehicles and to an IoT-connected society. Accordingly, ABLIC will keep contributing to the enrichment of lives around the world under the vision of inspiring customers with “Small, Smart, Simple” analog semiconductor solutions.