Is Only Full SiC the “Real“ SiC?

Is Only Full SiC the “Real“ SiC?

Whenever we talk about Silicon Carbide and its applications, our thoughts jump to Silicon Carbide MOSFET power modules, the so called “Full SiC” module. This mental bridge is the result of the well-known dynamic performances of a SiC MOSFET. Unipolar SiC MOSFETs switch much faster with lower switching losses than any other silicon device, allowing drastically increased switching frequencies with reductions in overall power losses and increased efficiency in power output. Therefore, the overall power density is significantly increased.

This means that when SiC components are used in applications that require magnetics for output voltage filtering, such as solar inverters or UPS systems, the benefits can be enormous. By increasing the switching frequency the magnetic components can be reduced in size, which in turn lowers material costs. The same rings true for DC/DC converters with a galvanically isolated transformer. Reducing the overall lower losses brings an additional benefit by reducing the system’s cooling requirements, leading to smaller heatsinks and  housings. In some cases, it might even be possible to change from forced cooling to a convection cooling method.

All of these benefits lead to substantial overall system cost savings despite the increasing costs of the power module itself. A SiC power module is more expensive than a Si module to produce because Silicon Carbide requires a different process to the Silicon. Firstly, the raw material is expensive to produce. SiC ingots grow very slowly and have to be formed from the vapour phase. SiC is one of the hardest known materials and the wafers can only be cut and ground using expensive diamond tools. Additionally, the majority of the chips nowadays are still produced on 4 inch wafers, with the prospect of changing to 6 inch in the coming 1 to 2 years (nowadays the Silicon IGBT chips are available on 8 or even 12 inch wafers). This wafer change will reduce material costs, and thus the SiC chip cost. Nevertheless, the cost per mm² will always be higher than silicon.

In low power applications (<30kW), the full SiC approach is being adopted due its overall benefits. However, this is not the case in medium power range applications where SiC chip prices do not linearly scale when chip area is increased. Hence, a solution is required to adopt SiC technology to medium range power applications and push converter performance barriers, while keeping an economically viable solution. From a cost perspective, the goal should be to use as little SiC chip area as possible in any given application. A proper requirements assessment can help to correctly estimate the size of the SiC chip area.

An additional option to gain SiC performance benefits but keep power module costs low, is to use a “Hybrid” Silicon Carbide solution instead of a full Silicon Carbide SiC. Hybrid simply means: Keep the switch Silicon, most likely IGBT, and use Silicon Carbide for the freewheeling diode only. This will not provide the full benefits of a SiC MOSFET solution, but it’s cheaper and effective if the IGBT is selected to match the SiC Schottky diode’s performance. Let’s have a closer look.

SiC Schottky diodes are also unipolar devices, using only majority carriers (electrons) to transport the charge. The benefit of unipolar devices is faster switching and contrary to bipolar silicon diodes, no minority carriers are present to recombine with electrons in blocking mode. This recombination causes the so called ‘reverse recovery’ tail current in a silicon diode, a current that flows in blocking direction of the diode while the voltage arises over the diode junction. This voltage and reverse recovery current causes power losses which can easily reach about 35% of the overall switching losses. With SiC Schottky diodes, the reverse recovery is not present, only a small capacitive current can be observed that’s caused by the SiC chip’s junction capacitance.

But there is a second significance of the Si diode’s reverse recovery current: the current does not only flow through the diode, but also through the complimentary IGBT that is just about to turn-on when the diode goes into blocking mode, causing additional turn-on losses in the IGBT chips. Assuming that this current is considerably smaller with SiC Schottky diodes, the turn-on losses will be reduced. As a rule of thumb, a reduction to up to 40% of the original value of the turn-on losses can be assumed while the IGBT turn-off losses are not affected. Now, when you apply a fast switching IGBT with naturally lower switching losses, the overall reduction of the switching losses can easily be in the range of up to 60% compared to a standard IGBT combined with silicon free-wheeling diodes.

So what does this mean for your application?

SEMIKRON has implemented the Hybrid SiC technology outlined above in a medium power stack, designed and optimised for medium power Solar and Energy Storage applications. The core of the stack is SEMIKRON’s solderless 6-pack SKiM module, a baseplate-less power module with sintered chips and a low inductance design. SEMIKRON has also implemented fast IGBTs to maximise the benefits of the Si-SiC combination.

This hybrid module can cover various configurations and be utilized as a three phase inverter (i.e. solar) or interleaved three phase bidirectional DC/DC converter (i.e. ESS). It can also be scaled up for higher power application by parallel operation across three phases.

On a given Solar application, the change from pure Silicon to Hybrid Silicon Carbide and a faster IGBT doubles the switching frequency from 8 to 16kHz at constant power. This provides the right headroom to reduce the size and weight of the magnetic components by 30% to compensate for the moderately higher cost of the power module. Together with the smaller magnetics, the systems space requirements also reduce, resulting in additional savings thanks to a more compact housing design.

The lower losses of the hybrid power module allow for up to 60% higher output current at 10kHz when compared to a silicon only system, all without pushing the IGBT or SiC Schottky diode thermally to their limits. The overall efficiency increases by roughly 1% to 98.5%, without any additional efforts. 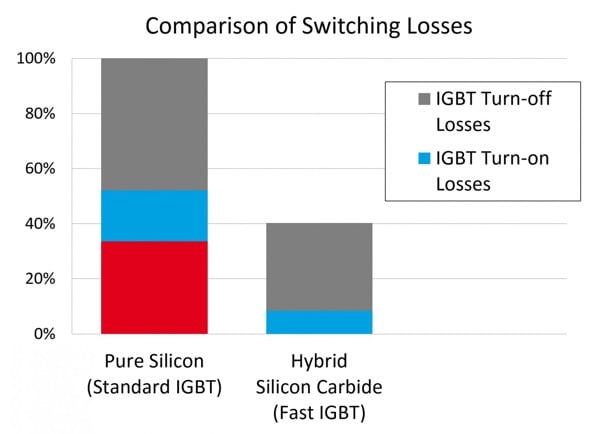 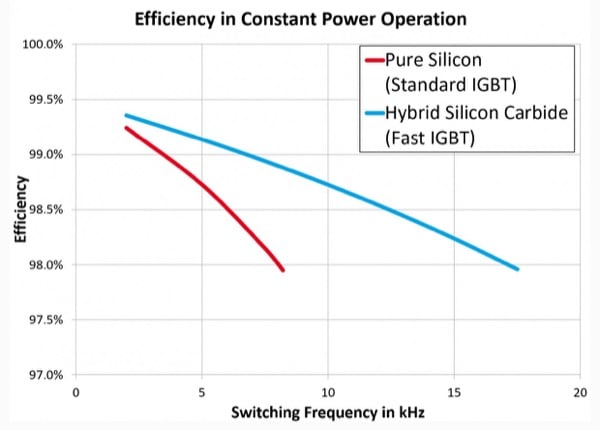 This solution is one way to overcome the high cost of SiC and depending on the application drivers, the solution can offer designers various options to capitalise the benefits of hybrid Si-SiC module:

Another advantage of the hybrid Si-SiC module is that the gate drive driver does not need to be modified, eliminating additional development efforts and their associated costs.