GaN brings compelling advantages in terms of efficiency for wall chargers and other power supply products, but achieving these in a cost-effective manner

GaN brings compelling advantages in terms of efficiency for wall chargers and other power supply products, but achieving these in a cost-effective manner can be challenging.

Navitas has had some well-publicized GaN design wins with recent chargers, including the RavPower RP-PC104, the Made in Mind Mu One and most recently the Aukey PA-U50, which contained an integrated GaNFast half-bridge device. Power Integrations has been making inroads, with an integrated GaN design win in the Anker PowerPort PD 1. Additionally, Power Integrations had a design win in an alternate version of the Aukey PA-U-50, with a later date code. In this case, no GaN devices were found.

Aukey PA-U50 24 W USB Charger with Navitas GaNFast Technology The Aukey PA-U50 provides a 5V output to two USB ports, with a maximum current of 2.4A each, corresponding to the 24W maximum output. The main printed circuit board (PCB) from this Aukey PA-U50 with GaNFast features an 1834 date code, likely corresponding to week 34 of 2018. It contains the Navitas NV6252 integrated half-bridge device, which Navitas has been actively promoting since it was initially reported at APEC 2019.

Table 1: Components found in the Aukey PA-U50. A transformer, two capacitors, and a choke are also present on the other side of the PCB.

An X-ray photograph of the 650V NV6252 integrated half-bridge found in the Aukey PA-U50 is presented in Figure 1. The X-ray shows that the NV6252 package contains two dies, namely, the NV6L002 low side die and the NV6H002 high side die, which are wired together in a half-bridge configuration, as shown schematically on the X-ray image. 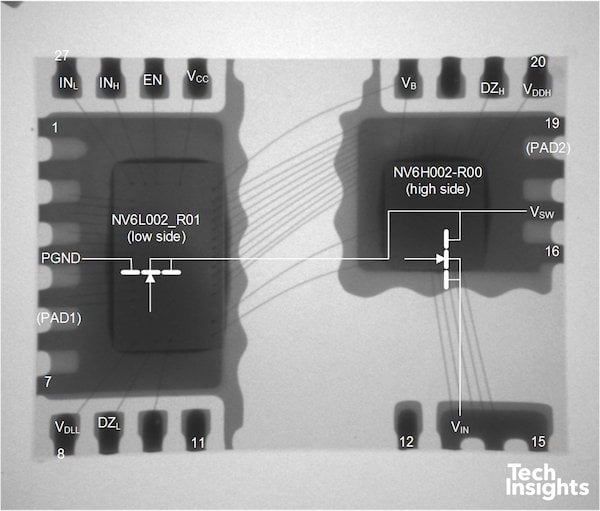 The cross-sectional analysis confirmed they are both GaN-on-Si dies Figures 2 and 3 show optical photographs of the two GaN dies, after de-processing to expose their layouts at the gate level.

Each features a large high electron mobility transistor (HEMT) gate array, plus a large block of peripheral analog circuitry. The integration of analog circuitry into a GaN-on-Si HEMT process is the key differentiator for Navitas’ GaNFast technology. This integration is beneficial in that the device can be engineered to perform in a similar manner to a silicon MOSFET, rather than simplifying the design of the final consumer product. 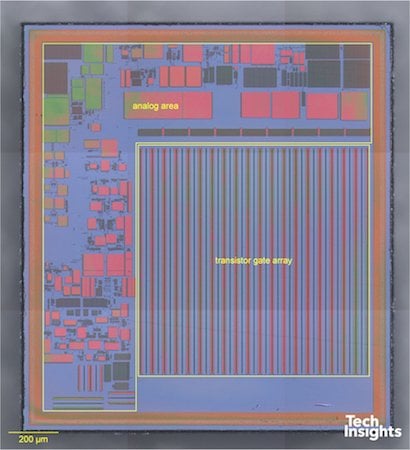 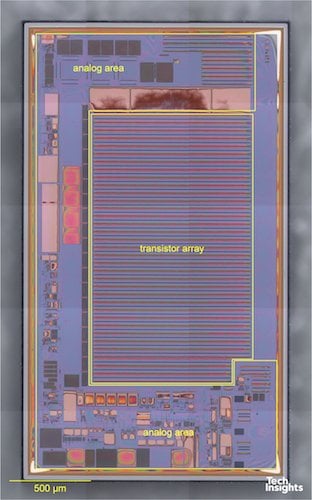 Navitas currently leads the market for integrated GaN technology, but they face strong competition as other existing strategies for achieving high-efficiency wall charger technology are being utilized.

Anker PowerPort Atom PD 1 A2017 USB-C 30 W Charger with Power Integrations GaN Technology Anker PowerPort Atom PD 1 is a compact 30 W USB-C charger. It delivers a range of different output voltages, including 5 V at 3 A, 9 V at 3 A, 15 V at 2 A, and 20 V at 1.5 A, as required by the USB-C power delivery standards. The PowerPort Atom PD 1 contained two PCBs. The larger PCB featured the required transformer, capacitors and a choke, while the smaller PCB featured a Power Integrations SC1933C device. Table 3 provides a list of all the devices found inside the A2017. The SC1933C appears to be part of the 650 V InnoSwitch product family.

Figure 4 shows an X-ray photograph of the SC1933C package that indicates that the SC1933C contains four dies, including the SG250F die, which was found by cross-sectional analysis to be a normally-on GaN-on sapphire HEMT device. The DX120B3 is a silicon-based MOSFET, while the DX121C and DX002B62 are controller integrated circuits (ICs). The DX120B3 and the SG250F appear to be wired in a cascode configuration, as is commonly done for normally-on GaN transistors. 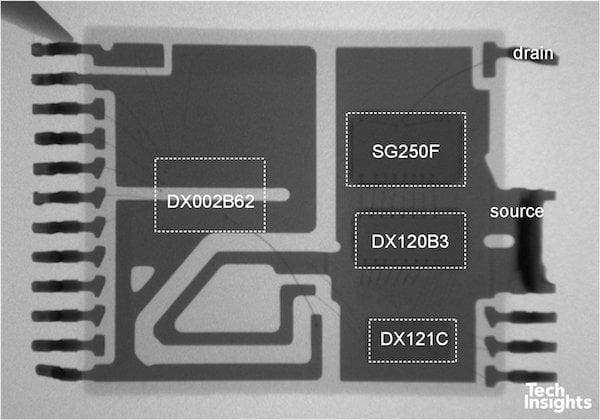 Rather than integrating the driver circuitry into the GaN dies, Power Integrations have chosen to integrate conventional silicon-based driver circuitry into a single GaNbased power IC device. It is not yet clear which strategy will be more successful in the market. In the MEMS industry, some early players explored creating integrated MEMSCMOS devices, but over time the market gradually adopted having separate MEMS and Si-based controller dies.

Aukey PA-U50 24 W Charger with Power Integrations Silicon Technology More samples of the Aukey PA-U50 revealed that they did not contain the Navitas GaNFast technology found in the first sample of the PA-U50. The markings on this version are slightly different, with the earlier sample having an additional AQ145 marking. Otherwise, the exterior appearance of the devices was very similar.

On the later Aukey PA-U50 main PCB, the date code is 1849, likely corresponding to week 49 of 2018. The Navitas NV6252 is not found on this PCB. Further inspection of the backside of the PCB shows a Power Integrations INN3166C, which is part of their InnoSwitch-CE family of devices, located beneath a capacitor. The INN3166C is an off-Line CV/CC QR Flyback Switcher IC with an integrated 650 V MOSFET. Table 4 list the devices found inside this second version of the Aukey PA-U50. This design required only three packaged silicon devices to create the charger.

The wall charger market is an area of considerable innovation, largely driven by the demands of government energy efficiency regulation, combined with a desire amongst consumers for more compact and more efficient charging technologies. Gallium nitride has potential in this market to be a disruptive technology; however, the issue is clearly not settled as silicon-based devices continue to feature prominently. The cost of using GaN in AC adapters continues to drop as the technology matures, which may help to strengthen its position and increase use in this market.

Sinjin Dixon-Warren received his Ph.D. in chemical physics from the University to Toronto and a BSc in chemistry from Simon Fraser University. He is a process analysis engineer at TechInsights.