In this article, learn how the use of GaN transistors was realized and measured at the PFC stage of a Traco Power power supply unit, as well as advantages, disadvantages, and technical problems

This article was co-authored by Erich Hinterleitner, a Development Engineer for Traco Power.

Today, extremely fast-switching transistors are available: Super Junction MOSFETs (SJ), silicon carbide MOSFETs (SiC) and transistors on a gallium nitride basis (GaN); these are still far more expensive than traditional transistors, but they make it possible to design smaller and more efficient switching power supplies and DC-DC converters. In a design study, the use of GaN transistors was realized and measured at the PFC stage of a Traco Power power supply unit. The advantages and disadvantages as well as the associated technical problems were studied and described in detail.

The field of power electronics has evolved rapidly in recent decades. This is primarily due to the increasingly fast-switching semiconductor switches, which make it possible to design ever smaller components for storing electric energy, such as capacitors and inductances. Combined with increased efficiency, this allows the realization of smaller power-electronic components such as power supply units and DC-DC converters. Semiconductor switches have been continuously enhanced over the past decades.

The latest semiconductor switches, e.g., Super Junction MOSFETs (SJ), silicon carbide MOSFETs (SiC) and transistors on a Gallium Nitride basis (GaN), achieve switching times almost ten times shorter than those of traditional MOSFETs. This leads to noticeably lower switching losses, which in turn allows for higher switching frequencies. Due to this and the increased efficiency, it is possible to realize a smaller design volume for switching power supplies.

However, please note that these advantages do not apply to all switching topologies used for switching power supplies and DC-DC converters. Due to the availability of efficient and low-cost controller ICs, various resonance converter concepts have been in use in recent years that are characterized by the fact that at the moment when the power is switched on or off, the current or voltage at the switching element is already at zero, thus preventing any power or energy loss (ZVS or ZCS: Zero Voltage Switching and Zero Current Switching). Since these switching concepts, which generally involve true resonance converters, do not generate any power loss as a matter of principle, no further reduction in the switching losses should be expected when using even faster-switching components.

For example, Figure 1 shows the general circuit diagram of a typical Traco Power industrial power supply unit with a PFC converter at the input and a resonance converter at the output. The entire electrical energy flows through the elements labeled L and C, and the values of the capacitor and the inductance essentially determine the converter’s switching frequency based on the resonance frequency.

Figure 1. Typical general circuit diagram of a Traco switching power supply with a boost converter at the input for generating a sinusoidal input current and a resonance converter for potential separation and voltage regulation

The power supply unit’s input is equipped with a voltage-boosting DC-DC converter (PFC converter), which forces a quasi sinusoidal mains inlet current at the input for correcting the power factor. The downstream resonance converter serves for adjusting the voltage level, achieving the galvanic isolation from the mains voltage, and regulating changes in mains voltage and load. However, since a resonantly or semi-resonantly switching PFC converter is very elaborate and can only be realized in a highly complex fashion, the use of the newly available, very fast-switching transistors as active high-frequency switches offers a viable option for this boost converter.

To be able to significantly increase the switching power supply‘s efficiency with these fast-switching components by means of lower switching losses, it is necessary to also reduce conducting losses in diodes and rectifiers. In this regard, a so-called “totem pole” topology is recommended for the boost converter. This makes it possible to reduce the traditionally used mains rectifier with its relatively high conducting losses from four to two diodes. The corresponding details are shown in Figure 2. This circuit was designed and tested with GaN transistors. 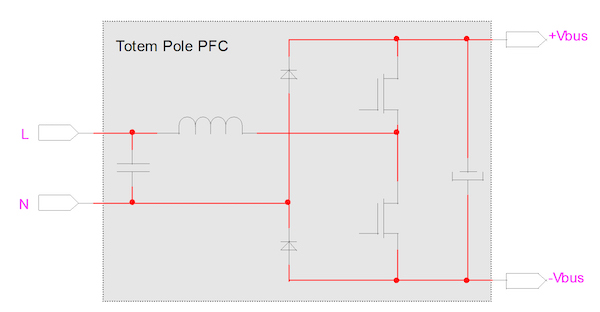 The advantages and disadvantages as well as the associated technical challenges are described below.

Super Junction MOSFETs (SJ) switch very rapidly, are easily replaced, and are inexpensive and readily available. Disadvantages are the relatively high control power when operated at higher switching frequencies, and the high switching loss, as well as the body diode‘s long recovery time in reverse operation. Silicon carbide MOSFETs (SiC) are faster than SJ MOSFETs, they are well-suited for high blocking voltages, and have a robust avalanche behavior and a body diode with very short reverse recovery times. However, the control of these transistors is somewhat more complex, since a negative gate preload may be required.

Gallium nitride (GaN) transistors are generally available in two different designs: self-conducting and self-blocking. Depending on type and manufacturer, this leads to different requirements regarding the gate control of these components. The GaN transistor’s advantage, however, is the up to ten times shorter switching time and the elimination of the body diode. Under certain circumstances, this advantage may justify the added expenditures for the control and management of these components.

To be able to fully use all advantages of the GaN transistors, a more complex gate control circuit is required, which is often already integrated on the switch circuit breaker’s chip. The disadvantage is that components by different manufacturers are no longer compatible and cannot easily be exchanged with each other.

When using the very fast-switching GaN transistors for both switches, the stage can be operated with a continuous choke current. This means that the choke current does not have to be zero when the switch is turned on or off, since only very low switching losses will result. Therefore, the storage choke can be operated with a significantly lower high-frequency alternating current.

Since, under control-technology aspects, the current through the choke and the rectifier diodes is properly controlled, for further reduction of the power loss the rectifier diodes can also be replaced with SJ MOSFETs, which have a very low ON-resistance. This results in the further reduction of the overall power loss and thereby also to increased efficiency.

Since the GaN transistors have switching times of only a few nanoseconds, parasitic inductances and capacities are induced to generate extremely high-frequency oscillations, which results in significant disturbances at the input and output and negatively affects the measurements. Therefore, the filters shown in Figure 3 were used. The measured switching signals, measured in each case between the GaN transistors’ drain and source terminals, are shown in Figure 4; the associated measuring design is shown in Figure 5. 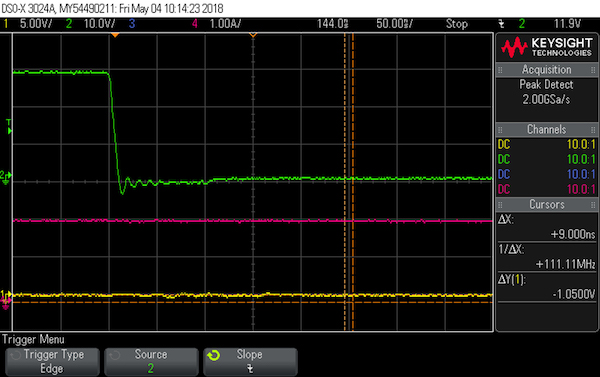 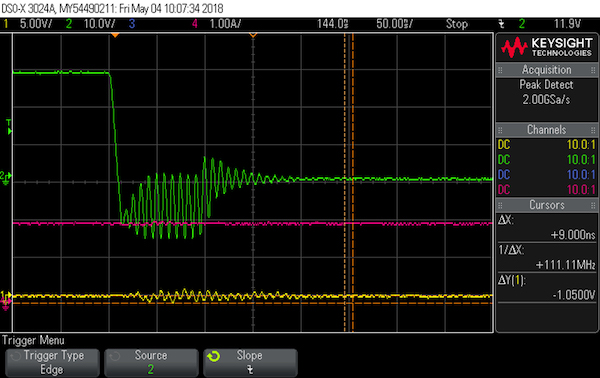 Figure 4. Switching behavior of a GaN transistor in a PFC converter with (a) and without (b) external SiC parallel diodes for preventing transient responses 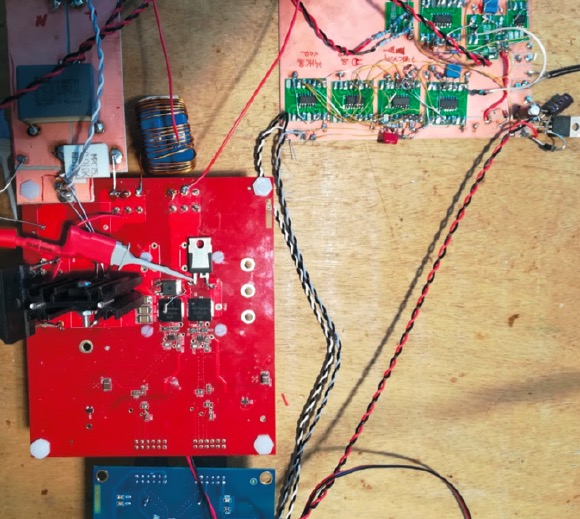 With the GaN transistor used here, it became apparent that SiC diodes (D3 and D4) parallel to drain-source are necessary to prevent oscillations during the dead time (GaN conducts in reverse, gate “off”). The measurement of the switch-off behavior of the drain-source voltage at the GaN transistor is shown in Figure 4, both with and without external parallel diodes. The switching process takes less than 7 nanoseconds, which means it is approximately ten times shorter than in standard MOSFETs. This also results in a reduction of switch-on and switch-off losses by the same factor compared to traditional MOSFET switches.

The circuit illustrated above is designed for an output of 1000 W; the two switching transistors are 80mOhm GaN transistors. The control and regulation was set up discretely and analog, so that all operating parameters can be influenced and set. The oscillations after switch-off shown in Figure 4b generate hard-to-filter high-frequency disturbances that would require a high filtering effort; therefore, they must be avoided.

Lower Inductances with the Use of GaN Transistors

The losses and the size of the inductance have a significant impact on the efficiency of the boost converter (PFC converter). The stored energy of an inductance is in quadratic relation to the current’s amplitude during switch-on and switch-off; at the same time, the Ohmic losses increase quadratically to the current.

On the other hand, the hysteresis losses in the inductance depend on the magnetic core‘s volume, the current’s alternating component and thus on the stroke of the change in magnetic flow density and the switching frequency. The evaluated test design used a mean switching frequency of 100kHz. The measurements of the choke current for the input voltages of 110VAC and 230VAC are shown in Figure 6. 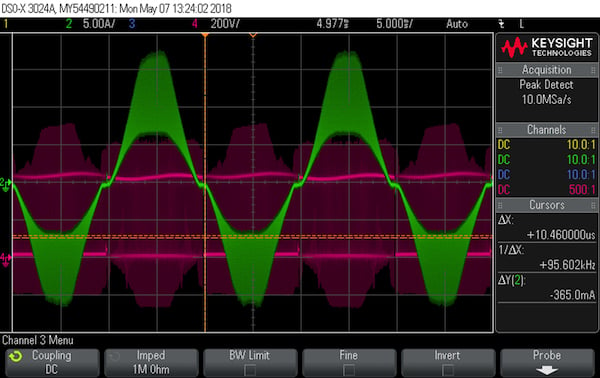 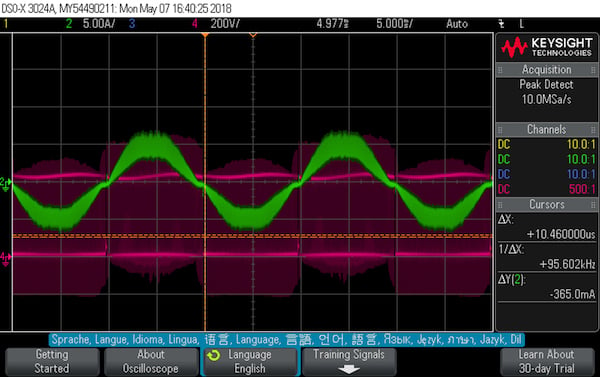 Since the core losses decrease along with a lower ripple factor of the current in the inductance, a PFC converter with GaN transistors provides the option of using magnetic materials for the inductance with a very high magnetic saturation flux density, despite relatively high specific hysteresis losses. This makes it possible to use higher switching frequencies at a low switching loss with several hundred kHz. This allows a further reduction of the inductance‘s construction size.

Increased Disturbances Due to Faster Switching

The extremely short switching processes in the GaN transistors result in the generation of square-wave currents and voltages, which - due to the extremely high activation and deactivation edges - generate high-frequency interference voltages and currents. These are undesirable and must be properly filtered to prevent the transmission of electromagnetic interferences from the switching power supply to its surroundings via the connection lines or via radiation. Common-mode interferences are the hardest to filter; corresponding measurements are shown in Figure 7. 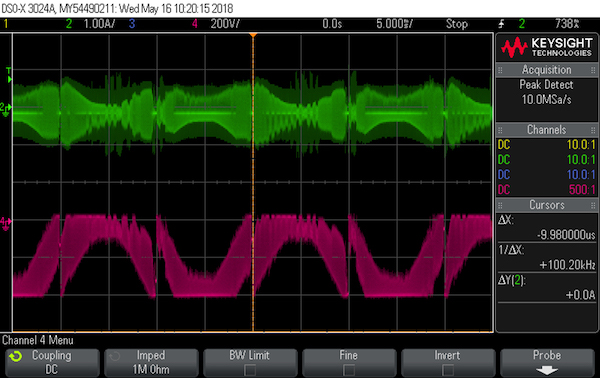 A detailed view shows that the common-mode voltage at 100Hz very quickly reverses its polarity; the high-frequency proportion is caused by the boost diode’s energetic recovery. In this process, the current is unable to find a path through the diodes D1 D2 and therefore flows back to the grid via the Y capacitor as common-mode current. Using an intelligent control for the active boost diode and replacing the passive rectifier diodes D1 D2 with MOSFETs, this current can be reduced significantly.

A PFC converter’s efficiency generally consists of the semiconductor switches’ conduction and switching losses and the inductance‘s Ohmic and magnetization losses. The total losses were measured and the proportions of the individual losses were calculated; they are shown in Figure 8. 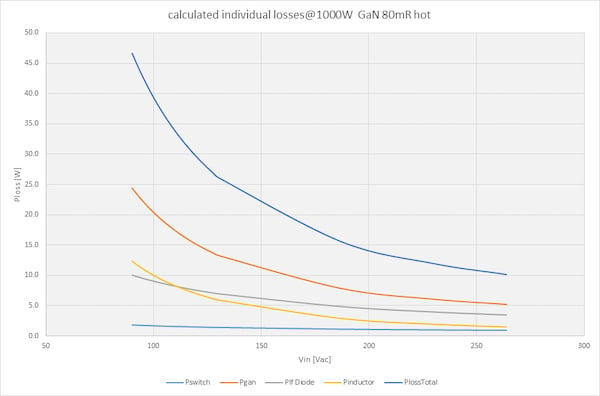 Figure 8. Allocation of the total losses in relation to the mains input voltage to the individual components at a mains voltage of 230VAC

Due to the higher currents at a lower input voltage and higher losses in the inductance‘s magnetic material, the efficiency strongly depends on the mains input voltage. This relationship is summarized once more in Figure 9. 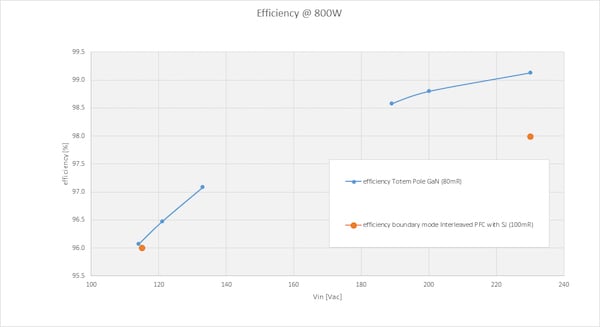 In summary, it can be stated that the use of GaN transistors with suitable circuit design in PFC converters can result in extremely high efficiency of more than 99%; however, the ON-resistance of economically feasible GaN transistors for low mains voltages remains clearly too high, and activated MOSFETs must be used as mains diodes. This results in an efficiency that is 3 to 5% higher than that of a PFC converter with conventional MOSFETs with a bridge rectifier.