Capacitors are reactive elements, which make them suitable for use in analog electronic filters. The reason for this is that the impedance of a capacitor is a function of frequency, as explained in the article about impedance and reactance. This means that the effect of a capacitor on a signal is frequency-dependent, a property that is extensively used in filter design.

Electronic filters can be realized in many different ways. They can be made using analog components only, such as capacitors, inductors, resistors, transistors, and operational amplifiers. They can also be realized using digital technology - digital signal processing circuits that consist of a specialized computer or microcontroller and software appropriate for the application. Analog filters are further divided into passive and active filters. Active filters use amplifying circuits and components such as transistors and opamps, while passive filters use resistors, inductors and capacitors exclusively. The advantage of passive filters is that no power source is needed apart from the processed signal itself, while the advantage of active filters is reduced size and cost.

A special subset of electronic filters are line filters. They are used to suppress electrical noise coming from the power supply line. There are many sources of power line noise which make the power supply voltage fluctuate at various frequencies. Some noise sources, such as air conditioners, refrigerators, heaters and other large loads introduce voltage spikes when they are switched on and off. Brushed DC motors create electrical noise as long as they are powered. Other noise sources, such as cell phones, communication antennas and light dimmers can introduce a high frequency, or RF noise.

Line filter capacitors are simple capacitive filters that are used to reduce the effect of such noise sources on the appliance, which leads to improved performance of the appliance. For example, a TV set uses such a filter to reduce image flicker. Some devices which are strong noise sources use line filters in order to prevent them from interfering with other devices. There are two common topologies used in line filters: the X and Y capacitors. Due to risks of fire and injury in the case of malfunction, X and Y type capacitors are subject to additional safety regulations.

X capacitors are connected across the line of an input. This topology can be seen in the schematic below:

The role of an X capacitor is to attenuate some of the electrical noise coming from the power supply line. The capacitor acts shorts out high frequencies, while passing through lower frequencies. X capacitors usually have a capacitance in the range between 1µF and 10µF, and are made from polypropylene for high frequency applications, since polyester capacitors can overheat. If the line voltage is DC, polarized capacitors such as electrolytic capacitors may be used. X capacitors may pose a safety hazard if they malfunction. Capacitors can malfunction in one of two failure modes: open-circuit or short-circuit.

If an X capacitor fails in the short circuit mode there is a risk of fire, unless a circuit breaker reacts by blowing an appropriately selected fuse. If the failure mode is open-circuit, the circuit acts as if the capacitor wasn’t there at all, which exposes the appliance to noise. Usually no damage is done in this case, but a performance loss could occur since the filter is left inoperative.

Y capacitors are connected between the line and the chassis of the appliance. This topology can be seen in the following schematic: 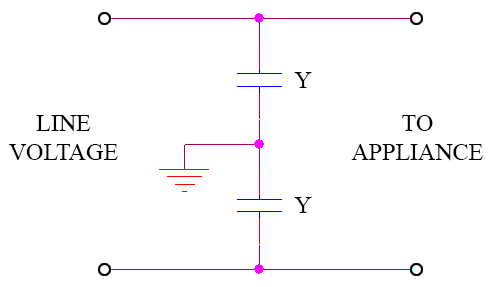 The role of a Y capacitor is the same as the X capacitor. This topology is used when the appliance has a grounded chassis. The chassis itself can act as an electromagnetic shield (Faraday cage) which protects the appliance from outside RF interference. In case of capacitor malfunction, this topology is potentially more dangerous to the user.

If one or both Y capacitors fails in the open-circuit mode, nothing happens except for the loss of effective filtering. This can cause performance degradation, especially with more sensitive devices, but it will not cause a safety hazard.

If one of the Y capacitors fails in the short-circuit mode, the result is that the chassis of the device becomes connected directly to the line voltage. If the user touches the chassis, there is a risk of electrical shock. In the rare case that both Y capacitors fail at the same time, the risk is fire, since they would short out the line voltage supply. To prevent these hazards, the chassis must be well grounded by means of a three-pronged power plug. The third prong on the power cord plug is connected to the ground wire in the home electrical installation. Additionally, correct fuses must be installed to prevent fire hazards.

Line filter capacitors are used in many appliances and industrial loads in order to protect the device from line voltage noise, as well as to protect other devices on the same line from the noise generated inside the circuit. Examples are large loads such as air conditioners, refrigerators, heaters and industrial machines and sensitive equipment such as computers, radios, TV sets, communications equipment and audio amplifiers.

Filter capacitors in the broader sense are used in all sorts of filters used in signal processing. An example application is an audio equalizer, which uses several frequency bands in order to allow different amounts of amplification for bass, midrange and high frequency tones.