Capacitors, like other electrical elements, can be connected to other elements either in series or in parallel. Sometimes it is useful to connect several capacitors in parallel in order to make a functional block such as the one in the figure. In such cases, it is important to know the equivalent capacitance of the parallel connection block. This article will focus on analyzing the parallel connection of capacitors and possible applications for such circuits. 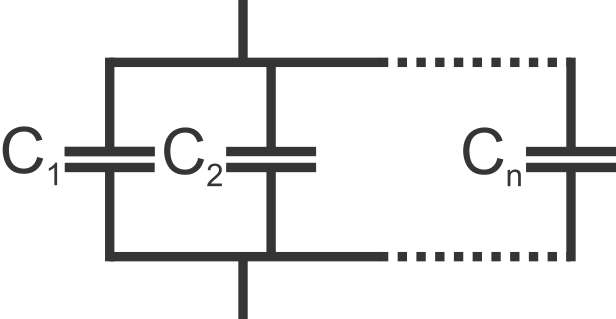 All capacitors in the parallel connection have the same voltage across them, meaning that:

where V1 to Vn represent the voltage across each respective capacitor. This voltage is equal to the voltage applied to the parallel connection of capacitors through the input wires. However, the amount of charge stored at each capacitor is not the same, and depends on the capacitance of each capacitor according to the formula:

The following equation is used to determine the equivalent capacitance for the parallel connection of multiple capacitors:

where Ceq is the equivalent capacitance of the parallel connection of capacitors, V is the voltage applied to the capacitors through the input wires, and Q1 to Qn represent the charges stored at each respective capacitor. This brings us to the important conclusion that:

Capacitors are devices used to store electrical energy in the form of electrical charge. By connecting several capacitors in parallel, the resulting circuit is able to store more energy since the equivalent capacitance is the sum of individual capacitances of all capacitors involved. This effect is used in some applications.

One example are DC supplies which sometimes use several parallel capacitors in order to better filter the output signal and eliminate the AC ripple. By using this approach, it is possible to use smaller capacitors that have superior ripple characteristics while obtaining higher capacitance values.

There are some applications which simply require capacitance values which are much higher than commercially available capacitors are able to offer. Capacitor banks are used in such applications. One example are capacitor banks used for power factor correction with inductive loads. Another example are energy storage capacitor banks which are announced for use in automotive industry, namely KERS (Kinetic Energy Recovery System) used for regenerative braking in large vehicles such as trams, as well as hybrid cars.

Another point to keep in mind is that capacitor banks can be dangerous due to the amount of energy stored and the fact that capacitors are able to release the stored energy in a very short amount of time. This stored energy is sometimes efficient to cause serious injuries or damage to electrical wiring and devices if shorted out by accident.