ncreasing the power capacity of semiconductors and designing devices with a rectifier element diameter of 100 mm or more both require a surge current testing system that can form current pulses up to 100 kA.

The most important parameter of power semiconductor devices reflecting their overload capacity is the surge current – the maximum permissible current amplitude of a semi-sinusoidal shape lasting 10 ms. Increasing the power capacity of semiconductors and designing devices with a rectifier element diameter of 100 mm or more both require a surge current testing system that can form current pulses up to 100 kA.

To solve this problem, a number of requirements must be taken into account. First, during the pre-breakdown state with the so-called direct current filamentation [1] the voltage drop across the test sample sharply increases and can reach 60V for high-voltage semiconductors. Secondly, the tester must ensure high accuracy in setting the current amplitude, since forming a current pulse with an amplitude of the order of 100 kA requires absolute deviation from the set value within 2-3 kA. Thirdly, it is necessary to ensure structural rigidity, taking into account the enormous dynamic forces arising during the current pulse.

The main approaches to the design of surge current testers are based on forming the surge current pulses either using a stepdown transformer [2,3] or by discharging a storage capacitor in an oscillatory circuit [3]. Using step-down transformers to form high-amplitude current pulses has a number of disadvantages, including an unacceptable effect on the power supply from an asymmetric current load, low setting accuracy with the impossibility of smooth current amplitude adjustment, the effect of supply voltage fluctuations on the set amplitude value, excessive weight and size. Today it is more common to form surge current pulses using an oscillatory circuit.

However, obtaining a pulse shape close to a proper half-sine wave requires a high-quality factor of the oscillating circuit, which is a problem in case of high losses. Losses in the oscillatory circuit due to losses in the conductor system and a significant voltage drop across the test sample lead to the emergence of an aperiodic component in the form of a current pulse, which is unacceptable under the test conditions. In addition, generating current pulses with an amplitude of tens of kiloamperes requires storage capacitors with capacitance up to thousands of microfarads. And finally, the stability of the generated current pulse in the oscillatory circuit is determined by the stability of the capacitor’s properties.

The need for storage capacitors of significant capacity with stable parameters and larger cross-section of the busbars in the tester to reduce losses cause a significant increase in the weight and dimensions of the tester. In [4] it was proposed to make test equipment based on active shapers – current sources with powerful MOSFETs. The principle of using a transistor as the current source lies in its operation on a linear portion of the transfer curve. A typical MOSFET curve is shown in Figure 1. 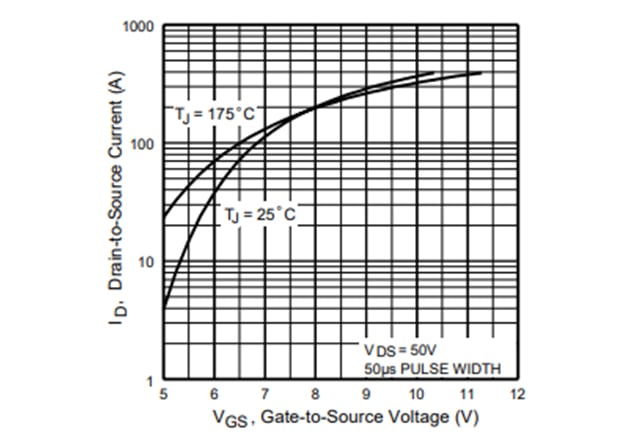 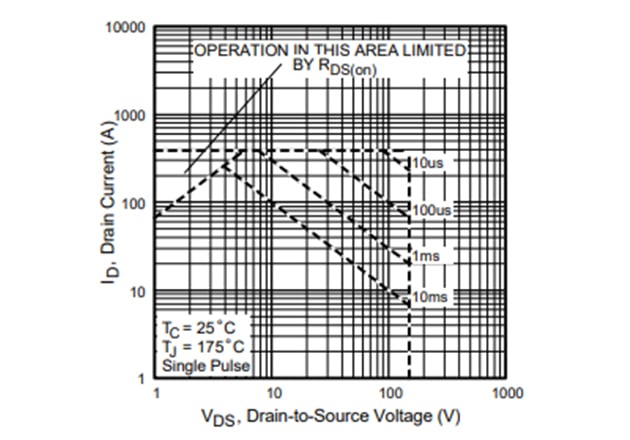 Figure 2: SOA of a MOSFET

The graph shows that at a drain-source voltage of 100V and a 10ms long rectangular current pulse the safe current amplitude is 10A. For a semi-sinusoidal shape, the permissible amplitude can be increased to 16A taking into account the shape factor. In addition, partial discharge of storage capacitors throughout the formation of a current pulse will decrease the drain-source voltage at the transistor and shift the operation mode of the transistor further into the safe area. Given this margin, the current value was selected at 13A.

Then the maximal temperature of the transistor chip will equal:

The maximum operation temperature of the chip is 175 °C, therefore, the temperature margin in the maximal load mode exceeds 40 °C. It was confirmed in practice when determining the maximum permissible current amplitude of the transistor, which made 20A.

A voltage source with low internal resistance is required to form a current pulse. As mentioned above, electrolytic capacitors were used for this. To calculate the required capacity of the storage capacitor, it must be taken into account that the voltage should not fall below 60V. At an initial voltage level of 100V, the voltage margin will be 40V. The capacitor's capacity is:

A capacitor with a capacity of 3300 μF per 100V was selected from the standard offer on the market. 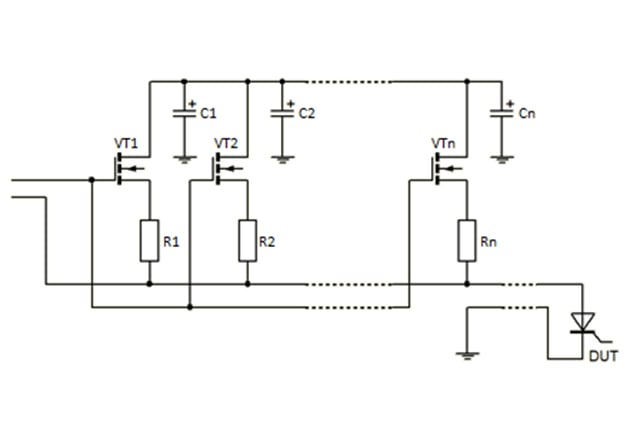 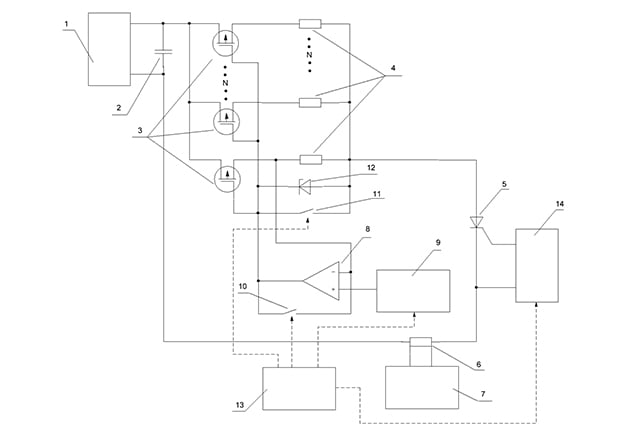 Figure 4: Functional chart of the tester

The next article in this short series will explain the inner-workings of the surge current tester.

Proton-Electrex is one of the Russian leaders in the design and manufacture of power semiconductor diodes, thyristors, modules, coolers, IGBTs (IGBTs), as well as power units for use in various electric energy converters. The company was founded and began production in 1996 on the leased premises of the Proton plant. Since then, Proton-Electrotex has developed its own infrastructure for the entire production cycle. Production is equipped with modern production lines, measuring equipment of our own production and areas for “clean technologies” with full compliance with the requirements for electronic products and microelectronics.