This article gives a short overview of the design and power considerations necessary to use constant-current LED drivers in practical applications.

LEDs are widely used across all market segments. Although high power LEDs need complex driver schemes, the vast majority of applications use LEDs with currents below 500 mA and can be driven by linear constant-current LED drivers. These are easy-to-use, reliable, cost-efficient, and do not affect EMC. This article gives a short overview on the design and power considerations necessary to use constant-current LED drivers in practical applications.

To drive high-performance LEDs, there are various high-end solutions using boost-buck topologies with complex controllers that require a deep understanding of the topology to create reliable and EMC-compliant designs. For low and medium power LEDs, however, there is the very simple and robust driver solution using constant-current LED drivers which operate as a simple linear regulator. From a power loss perspective, constant-current LED drivers are not ideal, but their excellent EMC performance, reliability, simple implementation, and - in the end - significantly lower system costs make them a preferred solution for driving LEDs up to about 500 mA. Drivers referred to in this article with the suffix NCR are available from Nexperia.

They are used in constant current source and automotive applications such as interior and exterior lighting (e.g. door handles, dashboard, number plate light, indicators or rear lights). Figure 1 shows the basic circuits for driving LEDs using one constant-current driver. Internally, such a driver consists of a BJT, two diodes, and two resistors. Constant-current drivers with PNP BJTs operate as high-side drivers, while the ones with NPN BJTs operate as low-side parts. One resistor defines the minimum output current and the other tunes the bias voltage and plays an important role for the enable characteristic. The high-side constant-current driver has 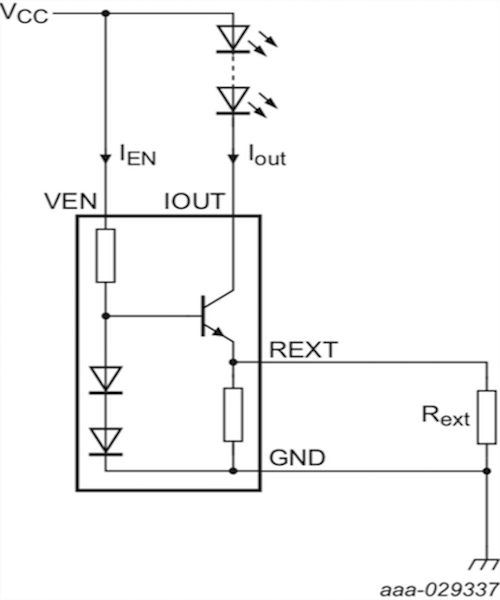 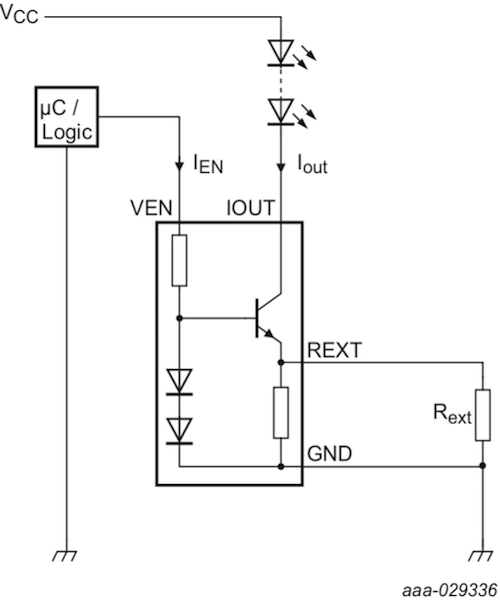 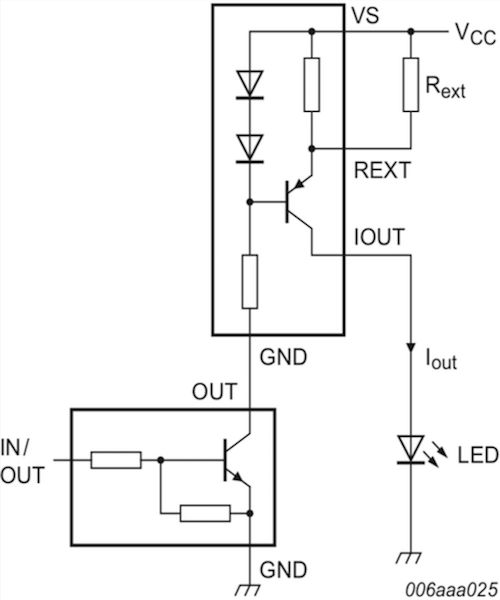 an enable pin which is connected to ground; both driver, and thus the LED, can be turned off by disconnecting this pin. In practice, this is performed using a resistor-equipped transistor (RET), as illustrated in the Figure 1, or MOSFET. Low-side drivers, however, need a certain potential to be enabled. NCRx20x series drivers require a voltage in the range of the supply voltage to enable them. The NCRx21x driver enables at a much lower voltage of 3.3 V. This part draws a current of about 1 - 2 mA at the enable pin so it can easily be driven by the output pin of a microcontroller or a logic device. This makes it very convenient to turn the LED on and off, and, using a PWM controller, dimming can also be simply achieved. 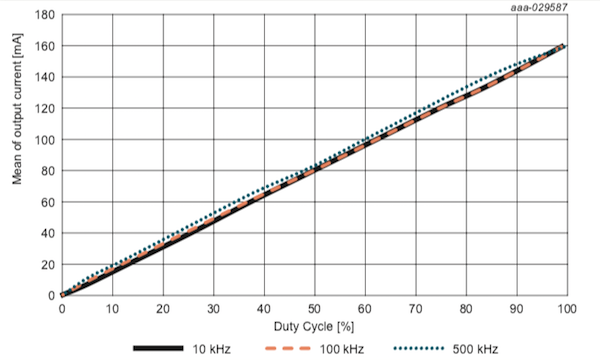 Figure 2: Mean of the output current as a function of the duty cycle for a NCR321Z for different switching frequencies with an external resistor of 6 Ω.

The dimming function is illustrated in Figure 2, which shows the mean of the output current as a function of the duty cycle for a NCR321Z for different switching frequencies with an external resistor of 6 Ω. The graph displays a linear relationship between the duty cycle and the measured average output current. Even for frequencies above the recommended 10 kHz, this linear relationship is maintained. However, a frequency not exceeding 10 kHz should be preferred to prevent EMC issues.

The minimum voltage drop across a constant-current driver is about 1.4 V. Below this voltage, linear regulation does not work properly. Above it, the voltage drop across the constant current driver dynamically adjusts to enforce the desired output current. In low- and high-side configurations, the output voltage is always calculated as Vout=VCC-VLED with the voltage at the LEDs VLED and the supply voltage VCC. Constant-current LED drivers are used when the brightness of an LED should be independent of the supply voltage to some degree. 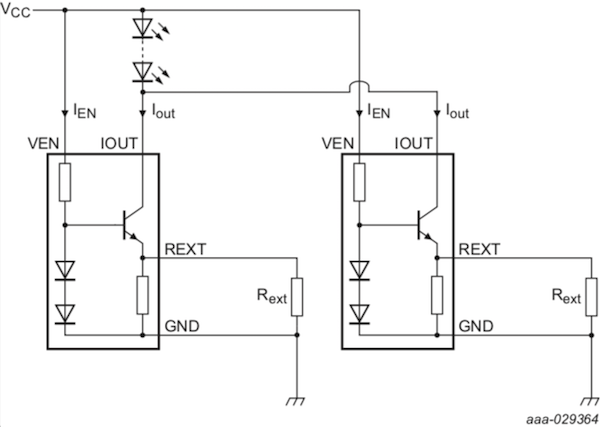 Constant-current drivers in the SOT457 package usually have Ptot=0.75 W. For an output current of 50 mA, this relates to a margin of 15 V. Newly-released devices in a SOT223 package from Nexperia have an increased Ptot of 1.25 W which increases the voltage margin to 25 V.

Additionally, the voltage margin can be increased by reducing the output current. Placing two or more constant-current drivers in parallel, as illustrated in Figure 3, effectively doubles the current. Using this method, a current exceeding the capability of a single driver can be driven, or a smaller current per driver can be used to increase the voltage margin. Using two constant-current, SOT223-packaged drivers with a drive capability of 250 mA, enables the circuit to drive 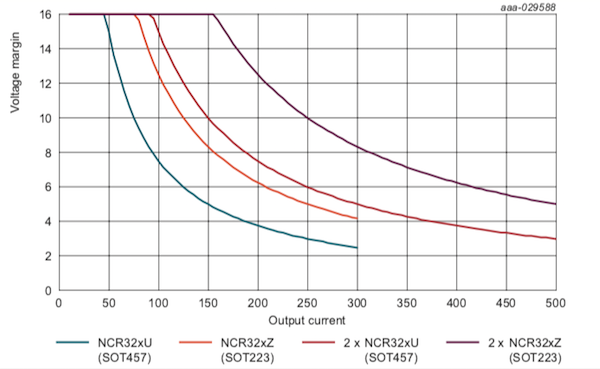 Figure 4: Voltage margin of single and parallel drivers in SOT457 and SOT223 packages 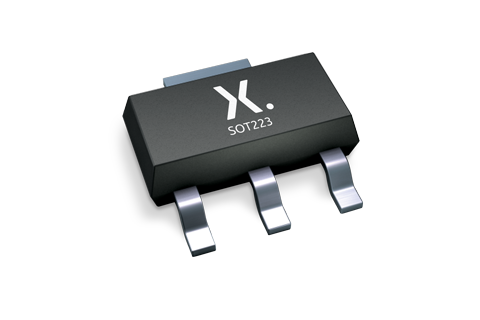 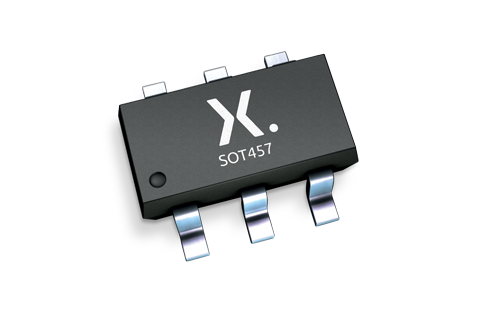 In conclusion, constant-current LED drivers offer a very cost-efficient and easy-to-implement solution for driving low and medium power LEDs. Using packages with a higher Ptot directly translates into a higher margin in the supply voltage and parallel drivers can be used to increase the current capability.