An Introduction to Integrated Magnetics

An Introduction to Integrated Magnetics

With an increasing need to design compact and highly efficient devices, design engineers are constantly looking for ways to develop techniques that integrate multiple electronic circuit functions. This concept of combining multiple components into one directly helps reduce the overall physical size and parts count in a power electronic device while offering a plethora of performance benefits and real-world applications. Read on to learn more about the concept, its uniqueness, and the need for magnetic integration.

What is Integrated Magnetics?

There have been significant enhancements in the design of power electronic systems based on the improvements in the type of devices employed, materials used, technical advancements, and choice of the circuit topology for the system. This has led to an overall upgrade in terms of key performance metrics like efficiency, reliability, system cost, and compactness which includes factors like size, weight, and volume [1].

Upgrades in performance are mostly due to the variations in the electrical component choices. Unfortunately, due to design complexity, advances in magnetics design have been significantly slow and resulted in a serious bottleneck with respect to the overall system design.

The resulting integrated magnetics structure is usually a combination of the characteristics of the individual components or has properties that are better than the individual ones catering to very specific applications. Typical magnetic components combined to form single physical assemblies are inductors and transformers.

How Does it Differ from Conventional Magnetic Integrations?

Inductors and transformers form a vital part of power electronic circuits because they perform essential functions such as dynamic power transfer, storage, and scaling. In a vast majority of the cases, they also contribute to increased size, bulkier systems, and higher overall cost of the converter or other power electronic system. This demands the need to look for ways in which the number and size of the magnetic components used in the particular topology can be minimized. At times, this can be at the cost of compromising the optimal electrical performance.

It is key to note that two individual magnetic components can be wound on a single magnetic core when their voltage waveforms are the same as demonstrated in Figure 1. Also, this forms the basis for achieving ripple-free current in one of the terminals based on the design considerations. 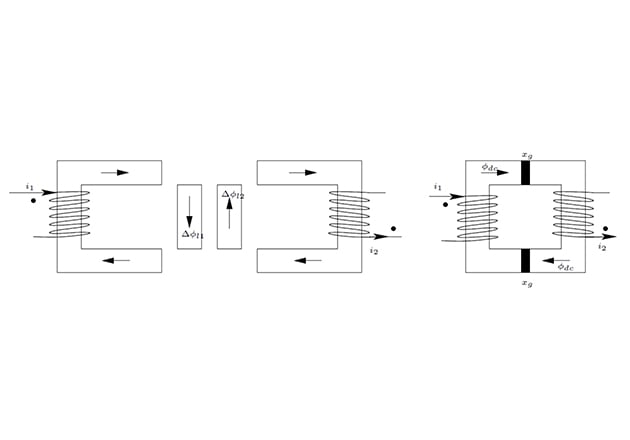 If there is any variation in the voltage waveform after the coupling is accomplished, a residual ripple may appear due to the second-order parasitics. Comparatively, as a general rule of thumb, the coupled structure should be loosely coupled in order to diminish the sensitivity of the current ripple to modifications in the turns ratio and to lessen the possible residual ripple.

The Need for Integrated Magnetics

The need for utilizing integrated structures is profound and design engineers are constantly looking for innovative ways of lumping components. There are some situations where the use of integrated magnetic components is not completely beneficial and might be overkill when simpler systems can accomplish the same requirements. However, it is important to note that several topologies inherently adapt well to the use of the integration of multiple magnetic functions. In such cases, when the design is properly executed, significant benefits as highlighted in the overview section are evidenced in the resulting system performance. This includes reduced stress on the switches and other components and reduction in ripple on the input and/or output currents.

It is important to note that the merits of coupling can be achieved without necessarily increasing the switching frequency. Improved efficiency is promised due to a compelling reduction in power loss associated with the magnetic cores as the number of them used per topology is diminished.

Even though the design process is comparatively challenging, it is worth the efforts as the overall performance advantages outweigh the hardships and in turn make the manufacturability simpler. Table I summarizes the feature-wise comparison between integrated magnetics structure and conventional magnetic structures [2]. It is evident that the use of an integrated magnetics structure gives an edge over the usage of conventional components in most of the applications.