SKYPER IGBT drivers isolate and transfer the microprocessor generated control signals from a low voltage side to the high voltage environment of power semiconductors. Besides this essential signal transfer function, this publication will also cover the isolation capability and the robustness of the SKYPER driver alongside dedicated protection strategies for 2-level and 3-level solutions realized through state-of-the-art ASICs.

With the trend being to utilize power electronics up to the upper limit defined in the Low Voltage Directive, 1500V DC or 1000V AC have become one of the design aims in photovoltaic (PV) and battery storage applications, resulting in more stringent design and materials selection requirements in the development of suitable IGBT driver electronics.

Put simply, the required safety isolation capability, a key feature of the SKYPER IGBT driver family, was designed to meet greater clearance and creepage requirements on the printed circuit board (PCB) for applications that exploit the low voltage directive’s operation voltage limit of 1500V. A further focus has been on looking into the ways to design converters that operate at a DC-link voltage of up to 1500V. Indeed, a simple 2-level system would require IGBTs with blocking voltages of more than today’s industry standard of 1700 Volt to cover transient switching over-voltages and achieve a suitable long-term DC stability (LTDS) performance.

The upcoming 2.0…2.3kV IGBT modules facilitate operation at 1500V DC-link voltage in 2-level topology and may be the solution to those semiconductor applications that do not require 3-level topologies known for their lower losses under certain application conditions and lower inductive filter requirements. A typical 3-level configuration is the neutral point clamped (NPC) topology which is also known as “I-type” 3-level configuration. This topology requires a proper shutdown sequence in the event of error detection, avoiding greater potential damage to the power stage resulting from erroneous or simultaneous switching of the NPC power stage. A suitable IGBT driver, therefore, has to meet the requirements for safe turn-off sequences for 2-level and 3-level topologies.

Figure 1a and figure 1b show the SKYPER 12 PV and the more powerful SKYPER 42 LJ PV driver, respectively, illustrating the compactness of both IGBT drivers despite the enhanced clearance and creepage requirements resulting from the 1500V DC operation. Remarkably, the PCBs shown in figs 2a and 2b combine a creepage distance enlarging pattern milled into the FR4 based substrate with a high quality substrate which boasts a comparative tracking index (CTI) of 400 and 600 in the SKYPER 12 PV and the SKYPER 42 LJ PV, respectively.

The milled pattern ensures the realization of the essential creepage distances according to international standards. In both of the SKYPER IGBT drivers shown here, the gold-plated terminals connect to an interfacing PCB through standard 2.54mm double row pin headers. Achieving the same normative compliance for the signal isolation and the isolated power transmission is somewhat more challenging. 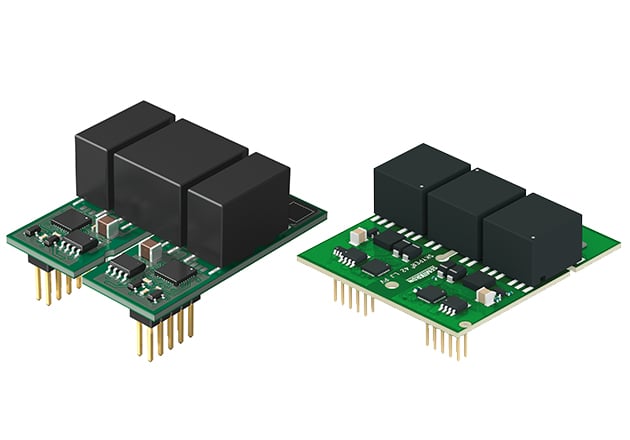 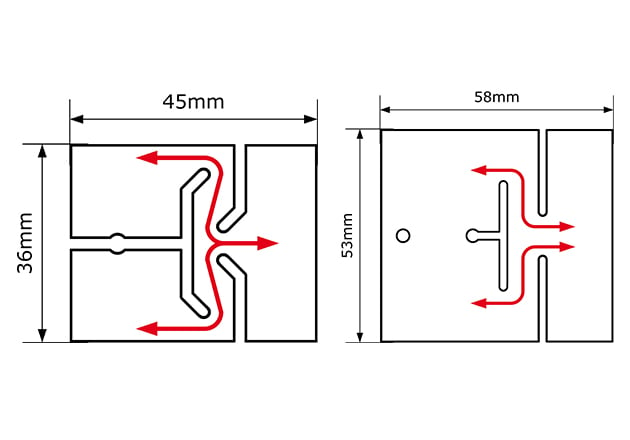 Figure 3a and 3b show SEMIKRON’s solution, providing additional gaps that incorporate the extra creepage required into the transformers housing without enlarging their dimensions in comparison to transformers used for 1200V IGBT applications. Both design highlights— the milled pattern on the PCB as well as the “gapped” design used for the transformer housing—ensure compliance across the 1500V range of the low-voltage directive.

Looking at the PCB used with the SKYPER IGBT driver, it can be seen that only very few external electronic components are placed on the printed circuit boards around the central ASIC control circuit. Both SKYPER drivers incorporate the latest generation of SEMIKRON’s proprietary ASIC circuits that employ power supply management, supervisory control circuits, logic state machines, and signal- and error processing units in addition to the basic IGBT driver output stage. 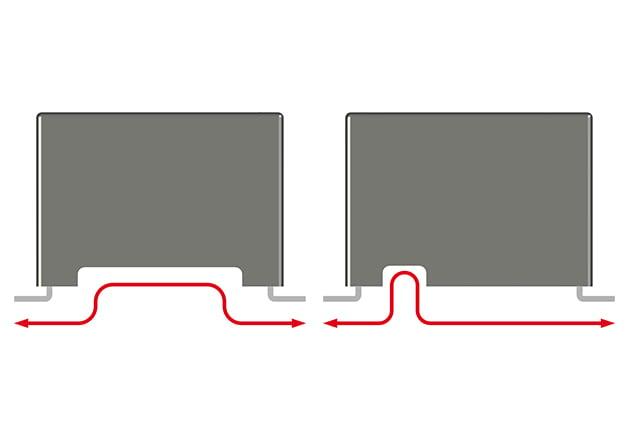 Figure 4 shows the block diagram of SKYPER driver cores, structured into three major functional blocks. The red-framed functional block on the left depicts the primary side, and the two red-framed blocks on the right comprise the two separate secondary sides of the driver core. The driver’s primary side processes the input signals and provides error management functionalities. Here, the signal integrity is largely ensured by dead-time observation and generation as well as short pulse suppression and interlock functions. 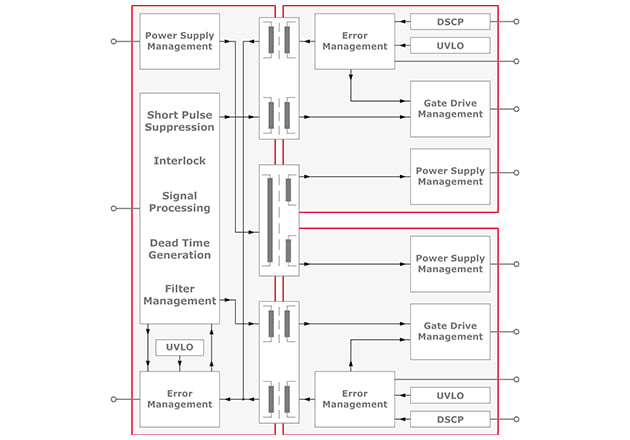 The aforementioned transformers connect the primary side to the two independent secondary sides contained in the two blocks on the right side of the diagram. The secondary sides host the IGBT supervisory control circuits and the power output stage. Both drivers permit a maximum switching frequency operation up to 100kHz and are able to feed an IGBT gate with up to 20µC of charge per pulse. Especially the more powerful SKYPER 42 LJ PV, boasting 35A peak output current and 4.2W output power per channel, meets the challenging requirements of the 7th generation IGBTs manufactured by several companies. This means that PV driver cores from the SKYPER family are suitable for use in inverter designs from a few kW to the lower MW range.

The SKYPER IGBT driver comprises complete protection functions that ensure proper operation and turn-off of abnormal operating conditions. The under-voltage “UV” protection detects a low supply voltage that would be dangerous for the IGBT and deteriorate the switching speed and conduction losses, leading potentially to thermal “wind-up” failure. The SKYPER short circuit “SC” protection is based on a dynamic desaturation detection approach. Instead of comparing the saturation voltage of an IGBT with a constant threshold value only during its conductivity, the SKYPER driver cores are able to detect short circuit conditions already during the transient turn-on process of the IGBT.

When the blanking time period tbl(VCE) has elapsed, the integrated SC detection circuit in the SKYPER compares the instantaneous voltage across the Collector and Emitter of an IGBT VCE(IN) during the transient event of IGBT turn-on with a down-ramping reference value VCE(ref) that can be tailored for the utilized IGBT. This special feature inside the ASIC turns-off the IGBT only in the event that the desaturation of the IGBT does not happen as defined or expected. Thus, the SKYPER essentially allows for the elimination of the commonly used waiting or blanking time and can monitor the turn-on behaviour of the IGBT on-line even during its transient state. 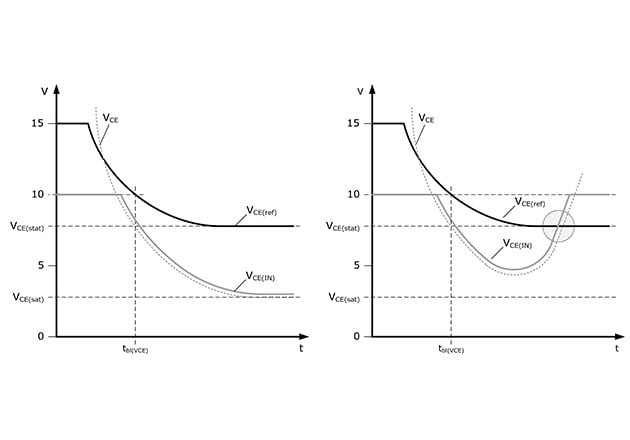 Figure 5a shows the normal IGBT turn-on behavior. After initiating the IGBT turn-on process through the driver, both voltages VCE(IN) and VCE(ref) reach their steady-state level VCE(sat) and VCE(stat) without crossing each other. The SC detection feature is active from the moment the voltage VCE(ref) falls below the fixed value of 10V set by the ASIC. The detection of an IGBT desaturation event is shown in Figure 5b. The example chosen illustrates a desaturation event that occurs shortly after the IGBT turn-on process starts. When the voltage VCE(IN) exceeds the instantaneous value of the reference voltage VCE(ref), the driver starts its error routine; depending on the user's error mode settings, the driver either turns off the IGBT via the soft-off channel and reports the error condition, or only the error condition is reported and the driver waits for a specific turn-off sequence defined by the controller.

Most standard IGBT modules employ an NTC on the ceramic substrate to provide the module temperature information. The SKYPER IGBT drivers can use this signal from the NTC to detect an overtemperature situation (OT) if the threshold voltage is chosen correctly.

The SKYPER can turn off the IGBT once the over-temperature level has been detected.

However, although the SKYPER might have detected an error what may not be wanted is for the detected error to automatically result in turn-off of the corresponding IGBT without an interception from the microprocessor supervisory circuit. Especially in 3-level neutral point clamped (NPC) configurations, such “automatic” error response behavior is undesired, since a specific turn-off sequence must be kept to prevent greater damage to the IGBT, the power module and the system. Hence, in a selected 3-level operation mode the SKYPER would only signal the error at the fault output, but not turn off the gate signal. In this case, the turn-off signal will come from the microprocessor supervisory control circuit to ensure a suitable turn-off sequence for all semiconductors to bring the 3-level power stage to a safe state. 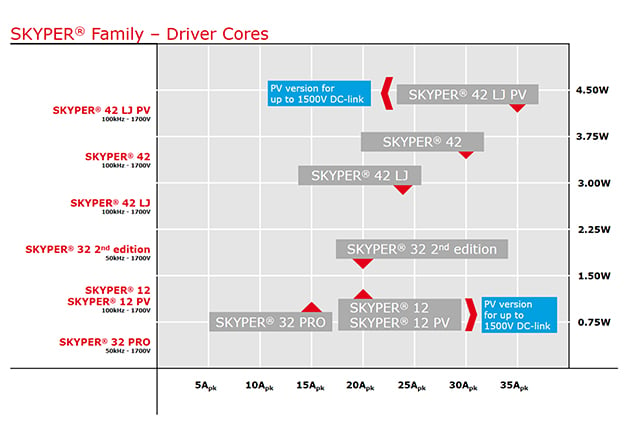 The table below and figure 6 show a selected range of SKYPER IGBT driver cores. Remarkably, the two proposed types SKYPER 12 PV and the SKYPER 42 LJ PV boast the 1500V ready feature and are suitable for different IGBTs sizes. All other models are suitable for DClink voltages of up to 1200VDC.

It’s easy to test the SKYPER 12 PV or the SKYPER 42 LJ PV driver core on a standard module if test and evaluation boards are used. For that purpose, SEMIKRON has developed a set of application sample boards for quick, easy and efficient evaluation of the features of the SKYPER driver cores. These evaluation boards, also known as SEMIKRON's "blue PCBs", are available for several 2- and 3-level IGBT modules. Consequently, the boards for the SKYPER PV series allow evaluation operation at voltages of up to 1500V DC according to EN 62109 and EN 61800-5-1 standards. The SKYPER 12 IGBT driver technology is also used in dedicated plug-and-play drivers that can be plugged onto 17mm modules like the SEMiX IGBT and compatible module series. The SKYPER 12 press-fit is suitable for 650V, 1200V and 1700V IGBT modules and is available with 2 different types of connectors. 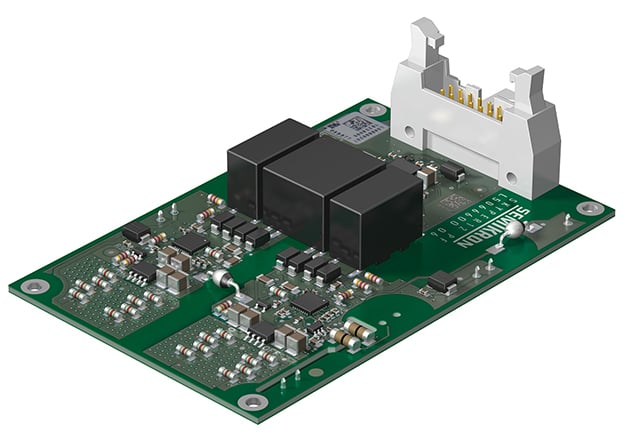 Usually, IGBT gate drivers are adopted for the IGBT in its specific environment and application conditions. For this reason, standard IGBT drivers as shown in figure 7 should be customized, since “standard” drivers can rarely take an application to its maximum performance limit. Custom modifications of SKYPER plug-and-play gate drivers help to get highest performance and robustness out of a given power stage design. Thanks to the proprietary design of SEMIKRON’s ASICs, which boasts a high degree of customization flexibility, changes in the gate resistor value or adjustments to thresholds or timing values are easily feasible in most cases. Do not hesitate to get in touch with us if you need a slightly more customized SKYPER.

Marco Honsberg received his engineering degree at Bergische University Wuppertal and MBA at FOM University of Economics & Management. He worked as a part of Mitsubishi Electric Europe BV Business Development where he is responsible for the development of promotion strategies and tools and constant development and realization of new business ideas and business plans as well as of strategic cooperations.

Niklas Hofstötter holds a Diplom -Ingenieur in Electrical and Electronics Engineering at the Technical University of Nuremberg Georg Simon Ohm. Throughout his career, he has already made 4 publications and is currently working at SEMIKRON as a Project Manager since April 2018.