Trions consist of three charged particles bound together by very weak bonding energy. Although trions can potentially carry more information than electrons in applications such as electronics, energy harvesting and quantum computing, trions are typically unstable at room temperature, and the bonds between trion particles are so weak that they quickly fall apart. Most research on trions requires supercooled temperatures, and even then, their fleeting nature has made trions difficult to control and hard to study.

In the above photoluminescence spectroscopy image, trapped trions and excitons can be seen as bright red spots against the dark blue background emissions from the host nanotube. This new work makes it possible to manipulate quasiparticles such as trions and study their fundamental properties in ways that have never been possible before. (image credit, Hyejin Kwon)

The ability to reliably create stable trions with specific properties will have broad implications for technologies such as bioimaging, chemical sensing, energy harvesting, solid-state computing and quantum computing.

A University of Maryland-led team of researchers has discovered a method to reliably synthesize and trap trions that remain stable at room temperature. The research makes it possible to manipulate trions and study their fundamental properties. The work is described in a research paper published in the journal ACS Central Science.

"This work makes synthesizing trions very efficient and provides a method for manipulating them in ways we haven't been able to before," said YuHuang Wang, a professor of chemistry and biochemistry at UMD and a senior author of the paper. "With the ability to stabilize and trap trions, we have the potential to build a very clean system for studying the processes governing light-emitting diodes and photovoltaics and for developing quantum information technologies."

In the new study, Wang and his colleagues used a chemical reaction to create defects on the surface of single-walled carbon nanotubes. The defects cause depressions in the energy landscape of the conductive surface of the nanotube. These depressions can be thought of as wells that charged particles flowing by could fall into and become trapped inside. 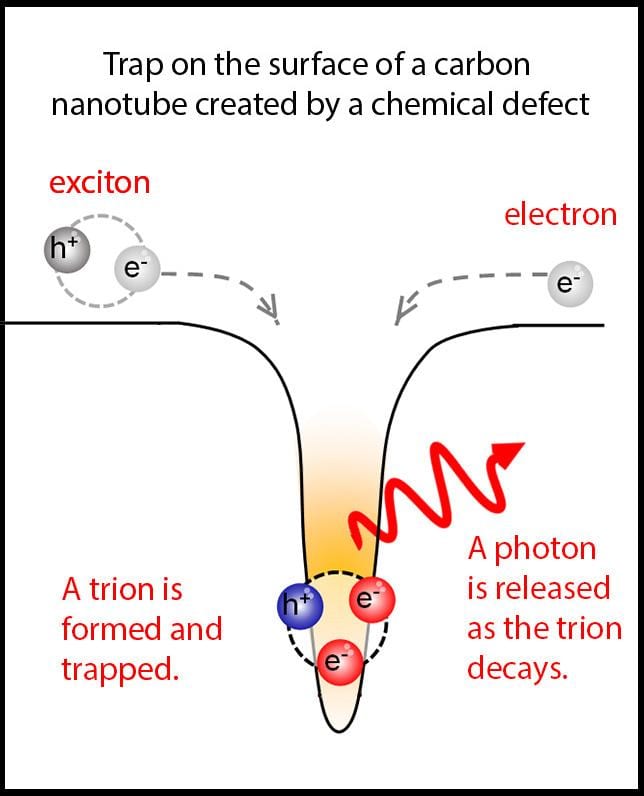 A chemical defect in a single-walled carbon nanotube creates a depression in the energy landscape of the nanotube. As charged particles flow across the conductive surface of the nanotube, they can fall into this depression. Here, an exciton (upper left) and an electron (upper right) fall into a depression, become bound together into a trion and are trapped. As the trion decays, it releases a photon that can be observed as a bright flash of luminescence. (image credit, Hyejin Kwon)

After creating the defects, the researchers directed photons at the nanotubes and observed bright luminescence at defect sites. Each flash of luminescence at a characteristic wavelength indicated that an electron and a particle called an exciton had become trapped at a defect site and bound together into a trion.

The excitons were created when the researchers directed photons at the carbon nanotubes. When a carbon nanotube absorbs a photon, an electron in the nanotube is pumped from the ground state to an excited state, leaving behind a hole which is positively charged. The hole and the electron are tightly bound together, forming an electron-hole pair called an exciton.

According to the researchers, when one exciton and one electron fall into a well created by the chemical defect, they bond together into a trion consisting of two electrons and one hole. As the trion decays, it releases a photon, resulting in the bright luminescence that the researchers observed.

"It's almost like bringing atomic physics into a chemistry lab," said Wang said, "because the well resulting from the chemical defect functions as a kind of atomic-scale beaker for one single 'bonding' event. What is very exciting, is that the energy level of the trion is dictated by the well, and we can use chemical reactions to manipulate the well. This means we can potentially control the energy and stability of trions."

Wang said that by altering the properties of the chemical defect created on the surface of the nanotube, it may become possible to precisely manipulate the charge, electron spin and other properties of the trions they trap. The trapped trions Wang and his collaborators observed in this study were more than seven times brighter than the brightest trions ever reported, and they lasted more than 100 times longer than free trions.

Wang and his team intend to continue developing their methods for precisely controlling the synthesis of trions at intentionally created defects on carbon nanotubes and studying the fundamental photophysics and optical properties of trions.

"It is interesting that a defect is not always negative, and in our case, could lead to entirely new ways of generating trions and conducting fundamental research on these quasi-particles," said one of the study's lead authors Hyejin Kwon (Ph.D. '16, chemistry), who is now doing her postdoctoral research at the University of Colorado. Kwon co-led the study with Mijin Kim (Ph.D. '18, chemistry), who is now a postdoctoral fellow at Memorial Sloan Kettering Cancer Center.

Other authors of the study from UMD include Adjunct Professor of Physics Charles Clark and Brendan Meany (Ph.D. '17, chemistry). The research was conducted in close collaboration with the teams of Alexander Högele at the Ludwig Maximilian University of Munich in Germany, and Stephen Doorn and Han Htoon of the Los Alamos National Laboratory.