NIST Researchers and collaborators developed a new technique to determine faulty semiconductor devices and that can also count the number of defects. The method can pave the road for the next generation of electronic devices.

Transistors and other semiconductor elements are the fundamental building blocks of almost all electronics circuits. Transistors are essentially switches that can be controlled by an external voltage. When a transistor is on, current flows from one side of the transistors to the other, and the current stops flowing when the transistor is turned off. These operations are critical for building logic gates and analog circuits.

However, semiconductor defects and impurities significantly affect the performance of transistors and, in turn, their switching characteristics. All semiconductors contain defects of some kind. The properties of defects, such as impurities or broken chemical bonds, destabilize the flow of current. These defects may be introduced during growth and processing and may manifest themselves immediately or over a long period during device operation.

The defects in a semiconducting material can introduce additional energy levels in the bandgap of the crystals. Their effects depend on where the defects are introduced. When the defect states are introduced in the mid-gap level of the bandgap, some of the carriers in the valence band can migrate to the conduction band via additional energy levels created by defects. This is the source of leakage current in various semiconductor devices.

As a result, it is important to understand defects at a fundamental level and identify defects in integrated circuits (ICs). In modern ICs, millions of elements are interconnected, and if one transistor operates incorrectly, the entire design may fail. Moreover, with increasing device densities, the chances of failing transistors also increase. Therefore, it is critical to identify and keep track of defective transistors in the chip.

But defects become harder to detect as the transistors shrink continuously. In addition, for semiconductor materials such as silicon carbide (SiC), there is no straightforward method to accurately characterize defects.

Researchers at the National Institute of Standards and Technology (NIST) and collaborators have developed a new method of detecting and counting defects in transistors. Their developed method works with both silicon and SiC. The work focuses on fundamentally understanding the interaction between holes and electrons in the presence of defects.

In a transistor, the current flows along the channel formed. However, when the current encounters a defect, the electrons get trapped and combine with holes. Each recombination removes an electron that takes part in the current flow, and multiple defects cause current losses. Therefore, it is also very important to quantify the number of defects as well.

The most commonly used transistors for integrated circuits are MOSFETs (Metal-oxide-semiconductor Field Effect Transistors). In this classical design, a metal gate is placed on top of a thin insulating silicon dioxide layer, below which lies the bulk of the semiconductor. The other two terminals are drain and source. When the voltage applied between the gate and source exceeds a threshold, a channel forms between source and drain that can conduct current. 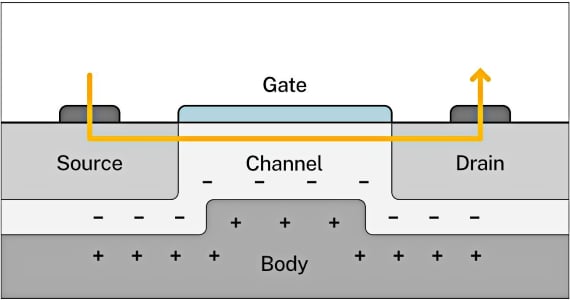 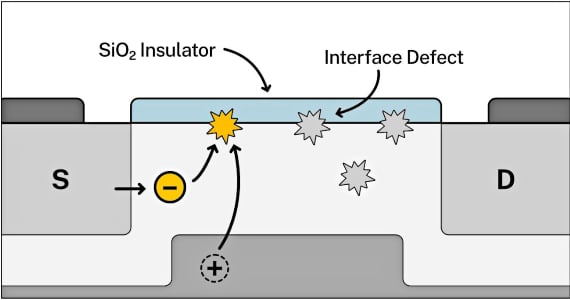 In this work, the researchers focused on a very thin region between the oxide layer and the bulk of the semiconductor.

"This layer is hugely important because the effect of a voltage on the metal overtop of the oxide of the transistor acts to change how many electrons are within the channel region under the oxide; this region controls the resistance of the device from source to drain," said NIST's James Ashton, who researched with colleagues at NIST and Pennsylvania State University. "The performance of this layer is dependent on how many defects exist. The detection method we investigated was previously unable to determine how many defects were within this layer."

The researchers used a highly sensitive method known as electrically detected magnetic resonance (EDMR), in which the transistor is exposed to frequencies four times higher than microwaves. By adjusting the frequency and field strength, researchers can make electrons flip at defects and recombines with holes. This recombination reduces the current. But, this activity is difficult to measure due to the high amount of noise from recombination.

Therefore, they used a technique called Bipolar Amplification Effect (BAE), in which the bias voltage applied to the transistor terminals is configured in a particular manner. Using BAE, the researchers can focus on the channel of the transistor, and they also managed to overcome shot noise caused by the recombination process. 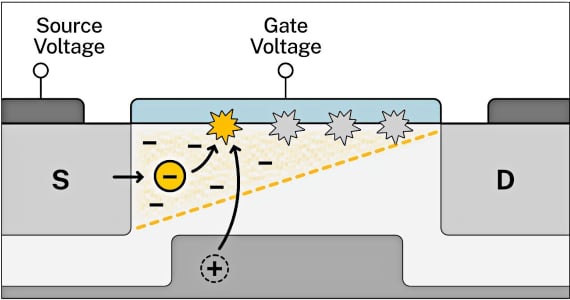 Placing transistors into bipolar amplification mode, which creates a decreasing concentration of electrons across the channel. Image Courtesy of NIST. 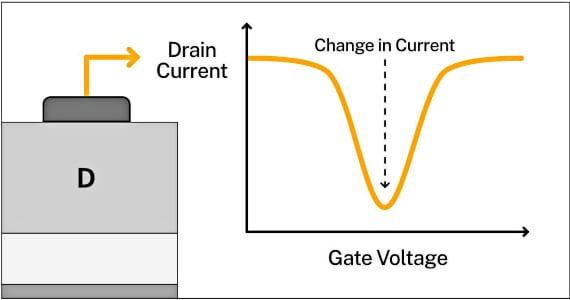 Researchers determine the number of defects from the reduction in the current. Image Courtesy of NIST.

"So because of the biasing we use in BAE and because we measure current levels at the drain," Ashton said, "we can eliminate interference from other things going on in the transistor. We can select just defects that we care about within the channel."

These techniques can help in quality assurance in the production of integrated circuits like processors. Moreover, understanding defects and controlling them can pace the road for more efficient electronic devices like LEDs and solar cells.

"This technique can provide unique insight into the presence of these destabilizing transistor defects and a path to mechanistic understanding of their formation," said Markus Kuhn, formerly at Intel and now senior director of semiconductor metrology and fellow at Rigaku, who was not involved in the research. "With such knowledge, there would be greater opportunity to control and reduce them in order to improve transistor performance and reliability. This would be an opportunity to further enhance design of the chip circuitry and device performance leading to better performing products."