Fuji Electric Co., Ltd. has launched a high-speed control system for plants and systems in which its newly developed controller is applied. The MICREX-View XX Series XCS-3000 Type E controller (XCS-3000 Type E) monitors and controls the operating status of drive devices, inverters and motors installed in production equipment and is capable of updating large capacity of data at the highest speed in the industry.

By applying this controller, the company significantly improved the performance of its high-speed control system for plants and factories, which is used at wide range of production shop floors such as steel plants, non-steel plants, paper mills, and similar installations.

Manufacturing plants require improved production capacity and stable operation as a result of increasing production items and production volumes of products. Recently, in the field of plant control, higher-speed control response and high-speed processing of massive data are demanded of drive control systems for achieving high-quality products and stabilization and improved efficiency of operation.

This system can update the monitoring and control data of the drive devices (inverters and motors) installed in production equipment in 0.5ms, making it the fastest in the industry. It also has a higher volume of data that can be sent and received at one time (512k[STEP]) by more than tenfold compared to the company’s conventional products. This improves the production capacity of production equipment.

2）Synchronous control of devices under multiple controllers to improve yield

In large-scale steel plants, multiple controllers are used to control 300 to 400 drive devices, and even a slight time lag in the control of these devices can affect the quality of the finished products. This system is the first in the industry to implement multi-axis synchronous control that simultaneously controls devices under more than one controller without time lag. (See figure below.) This contributes to improved production yield. 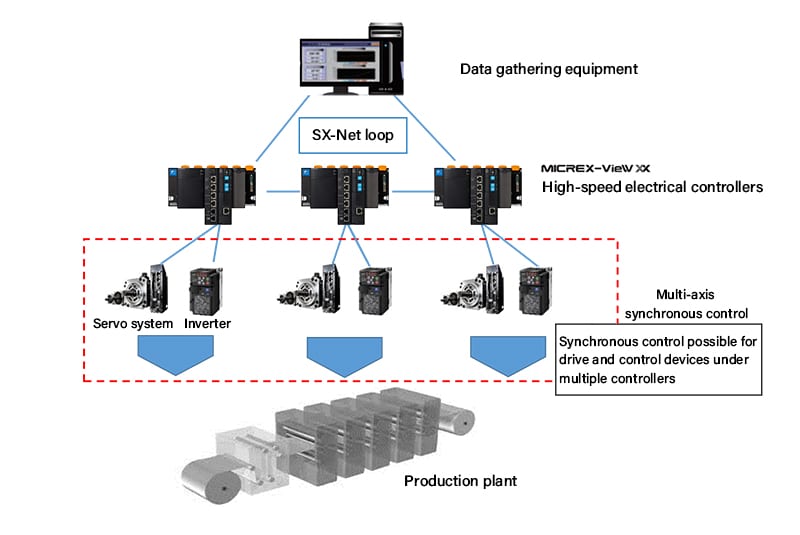 In a typical control system, all of the devices connected to the controller are located on the same network, which means that if there is a disrupted connection or any other network failure, they will all stop simultaneously. This system employs a loop configuration, which is a system that allows data to be transmitted even in the event of a network failure by avoiding the point of failure, which reduces the risk of equipment shutdown. This has improved system reliability.