Together, the companies will look to deliver a portfolio of end-to-end wireless power transfer solutions for industrial and automotive applications.

Building on their multi-year strategic relationship, GaN Systems and PowerSphyr announced early this month that they will work to jointly develop a new portfolio of 30, 100, and 500-watt wireless power solutions for the industrial and automotive arenas. 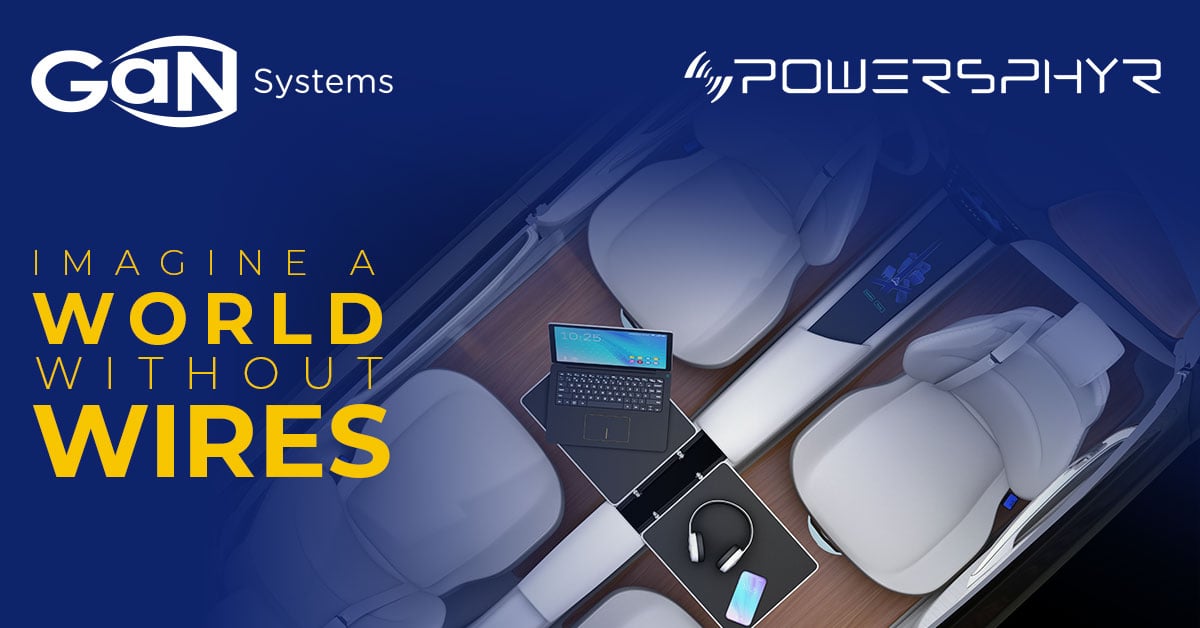 In a press release announcing their new initiative, the companies touted the partnership as a game-changer for the industry, with PowerSphyr leveraging GaN Systems’ leading semiconductors and its own power technology expertise to build new state-of-the-art solutions.

“Our combined efforts will bring cutting-edge solutions… to our industrial and automotive clients,” PowerSphyr CEO Will Wright said in a written statement. “By partnering with GaN Systems… we will enter a new stage of wireless power.”

PowerSphyr is now employing GaN Systems’ power semiconductors on the receiver side of wireless charging solutions as well as on the transmitting side, with ongoing collaboration poised to engender further hardware and firmware innovation, the companies said.

The Case for Wireless Power

The electric vehicle (EV) provides a fantastic example of the need for wireless power. Per PowerSphyr, each one contains north of 200 power connectors and 5,200 feet of copper, which in total weighs a whopping 180 pounds (81.6 kg). 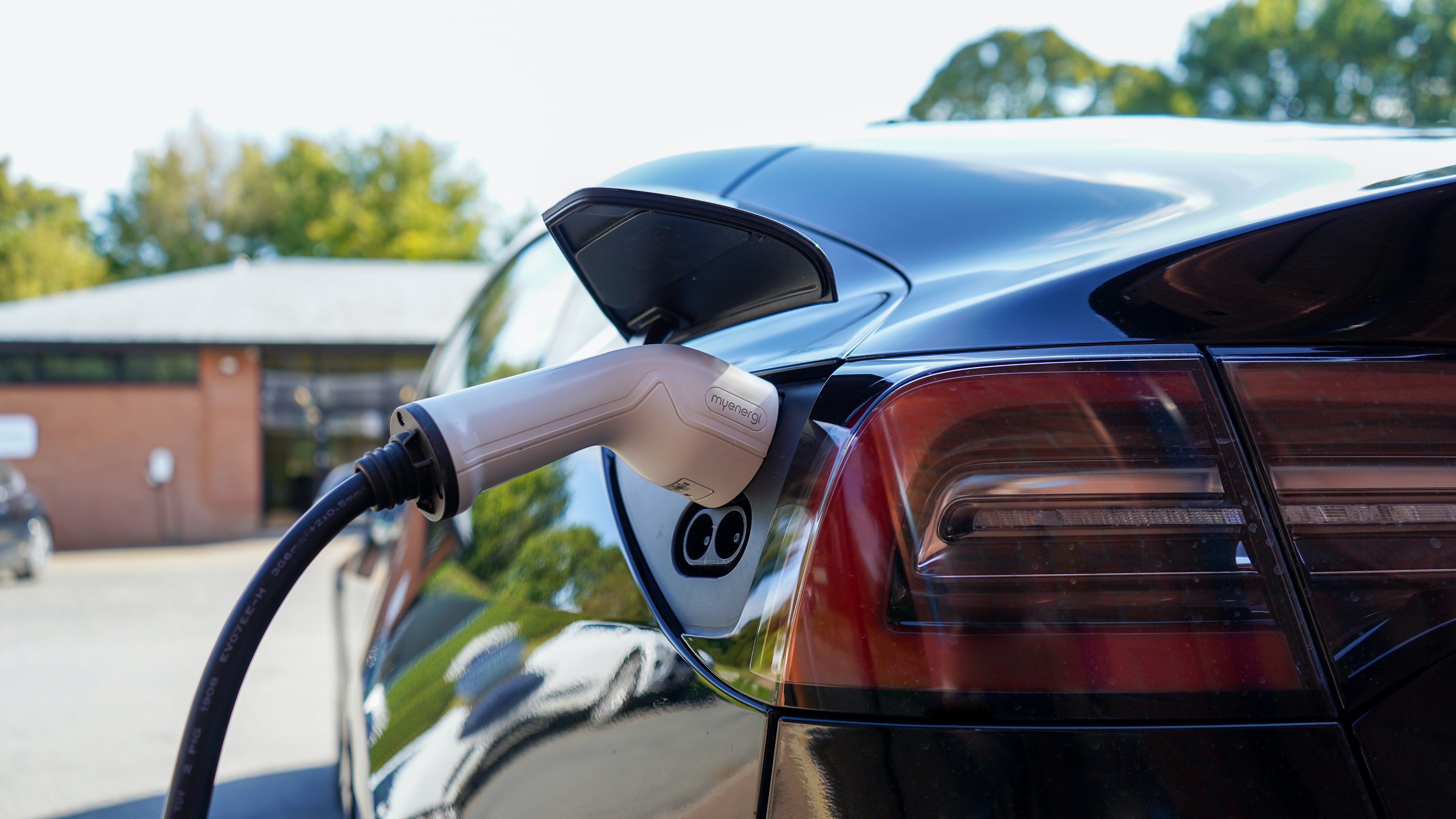 Every pound of unnecessary weight in an EV further limits its range between charges, and the sheer number of wires and connectors involved can lead to reliability issues when that machinery breaks from inevitable wear.

But through the deployment of wireless systems, these issues could be largely eliminated.

RDS(ON) is the resistance across the semiconductor when it is in its ON state; the lower this is, the less power is wasted as heat. QG is the quantity of electrical charge that must be pumped into the device’s gate for the semiconductor to reach the ON state; the lower this is, the faster the unit can switch on and off. The two are often bundled together to specify a device’s “figure of merit,” and the smaller the better.

The company fields just three transistors of the 100 V variety, two of which sport RDS(ON)s of 7 mΩ with total gate charges of 8 nC; the third device is specified at an RDS(ON) of 16 mΩ, with a QG of 3.3 nC.

As our own Dale Wilson has reported in a series of articles, more than 100 years after Nicola Tesla first filed a patent application for an “apparatus for transmitting electrical energy,” wireless power transfer technology is now seeing serious development across industry.

Early in June, Wilson traveled to the Sensors Converge conference in San Jose, CA, where he met with executives at Powermat and Energous, two potential innovators in the WPT space.

The former is working to bring a 600-watt WPT solution to market, and has also successfully transmitted data over a 100 kbps channel using the same link delivering that wireless power. One application for this dual functionality is the “microcharging” of batteries in active robots, with the data link polling each cell and directing specific charge to where it is most needed.

The latter is focused not on scaling WPT in terms of raw power, but distance instead. Energous is working to develop WPT solutions that can effectively transfer power at ranges of up to 15 meters, though the company is currently limited to 1 m with its certified 5 and 10-watt offerings.

In the automotive space, Wilson in late June covered a new pilot project for induction-based dynamic wireless power transfer (DWPT) at a 1 km track in northern Italy, near Milan.

In its inductive forn, DWPT involves the installation of copper coils into the road itself. Once embedded and connected to a power distribution system, those coils charge EVs as they move across the road’s surface.

The project, which was led by automotive giant Stellantis and coordinated by A35 Brebemi, successfully demonstrated this with its test run of a Fiat New 500.

With copper coils capable of 1 MW of power transfer embedded into the Arena Del Futuro—that’s Italian for the “Arena of the Future”—the vehicle was able to both maintain highway speeds and remain fully juiced as it looped around the track. 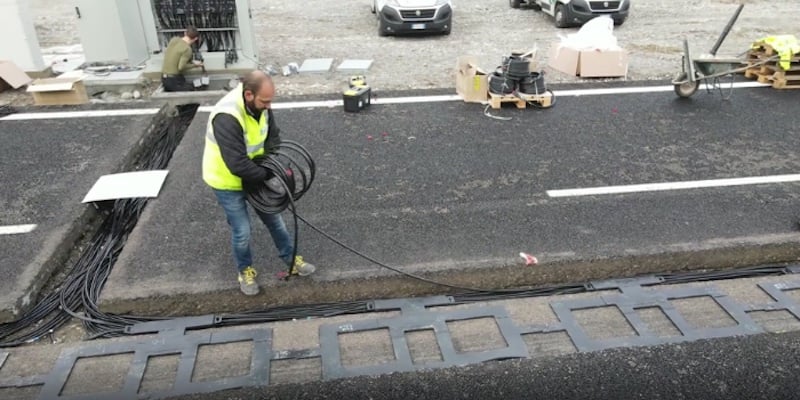 Of course, one track does not an interstate highway system make, but the proof of concept here is significant nonetheless.

At scale, DWPT could make for a boon to the entire E-mobility sector. Future models could employ far smaller batteries and yet offer similar—if not greater—mileage than current models, leading to an easing of critical raw material shortages, a significant reduction in prices, and an acceleration of widespread adoption.

Testing and research at the track will continue through the end of the year, with project partners focused on further pushing the technology.