"The worldwide push to advance renewable energy is limited by the availability of energy storage vectors," says Banerjee in the team's paper, published in the journal Chem, a new chemistry-focused journal by Cell Press.

"Currently, lithium-ion technology dominates; however, the safety and long-term supply of lithium remain serious concerns. By contrast, magnesium is much more abundant than lithium, has a higher melting point, forms smooth surfaces when recharging, and has the potential to deliver more than a five-fold increase in energy density if an appropriate cathode can be identified," Banerjee continued. 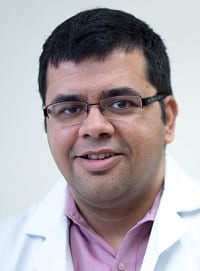 Ironically, the team's futuristic solution hinges on a redesigned form of an old Li-ion cathode material, vanadium pentoxide, which they proved is capable of reversibly inserting magnesium ions.

"We've essentially reconfigured the atoms to provide a different pathway for magnesium ions to travel along, thereby obtaining a viable cathode material in which they can readily be inserted and extracted during discharging and charging of the battery," Banerjee says. 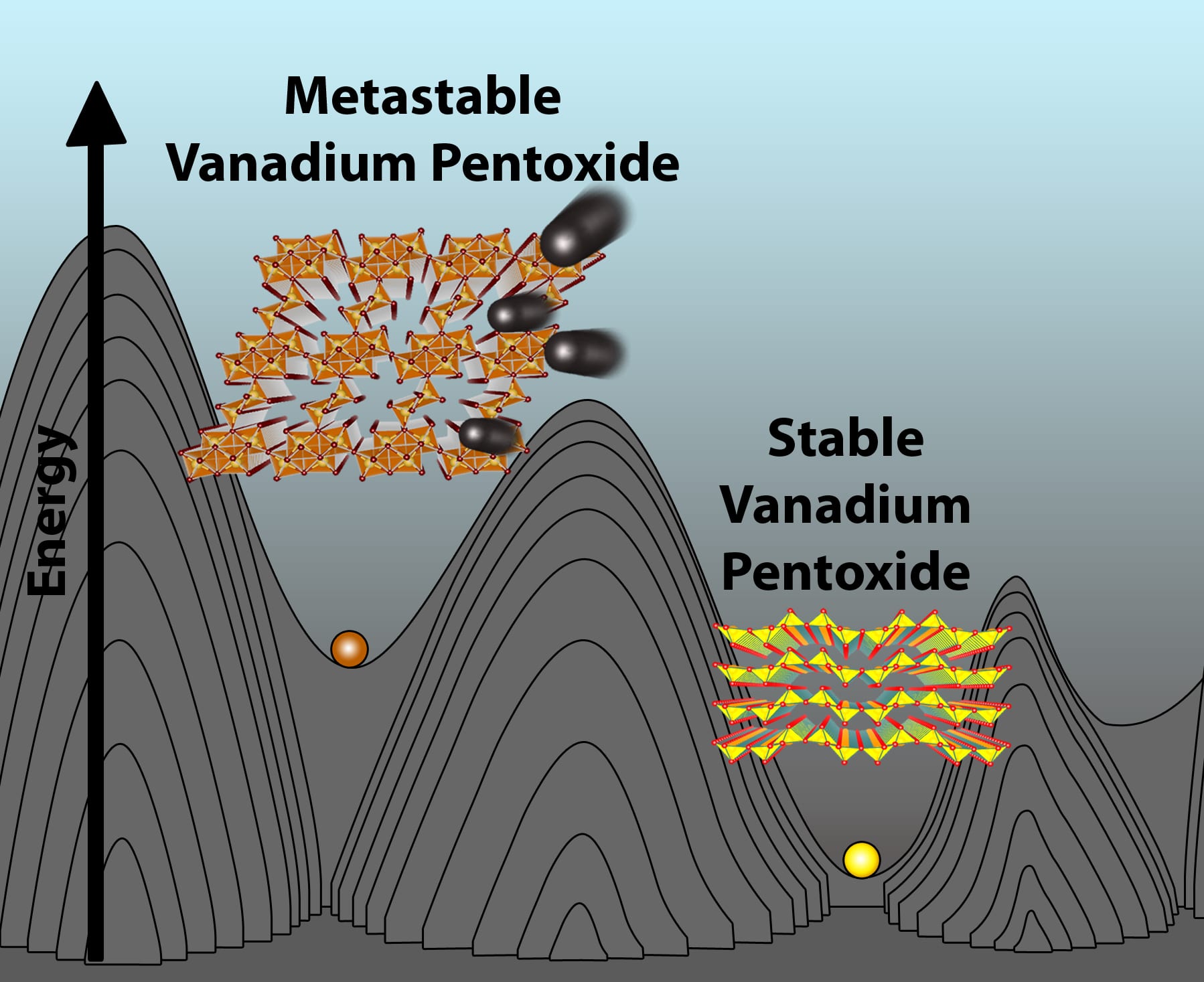 This rare phenomenon is achieved by limiting the location of the magnesium ions to relatively uncomfortable atomic positions by design, based on the way the vanadium pentoxide is made -- a property known as metastability.

This metastability helps prevent the magnesium ions from getting trapped within the material and promotes complete harvesting of their charge-storing capacity with negligible degradation of the material after many charge-recharge cycles.

The Ins and Outs of Intercalation

Banerjee, a Davidson Professor of Science in the Texas A&M Department of Chemistry and an affiliated faculty member in the Department of Materials Science and Engineering, has been working for a number of years to better understand ion intercalation -- the critical process by which ions like lithium and magnesium move in and out of other materials within intercalation batteries.

Using one of the world's most powerful soft X-ray microscopes -- the Scanning Transmission X-ray Microscope (STXM) and X-ray Emission beamlines -- at the Canadian Light Source in tandem with one of the world's highest resolution aberration-corrected transmission electron microscopes housed at the University of Illinois at Chicago (UIC), Banerjee and collaborators from the Lawrence Berkeley National Laboratory, the UIC and Argonne National Laboratory were able to observe the unique electronic properties of their novel vanadium pentoxide and directly prove magnesium-ion intercalation into the material.

Collectively, the team applied decades of combined experience in materials science to explain the fundamental reasons why this new type of vanadium pentoxide is superior to the old version as well as to Li-ion batteries.

Laptops and cell phones are two examples of the many technologies enabled by the rapid development of the lithium-ion battery, which revolutionized energy storage capacity and rechargeability in comparison to its lead-acid and nickel-metal hydride predecessors.

However, given the widespread use of lithium not only in portable electronic devices but increasingly in the much larger batteries required for electric vehicles and grid energy storage, lithium is expected to be in increasingly short supply in the long-term.

Furthermore, Li-ion batteries are a risky game, as highlighted by recent widely publicized reports detailed in Scientific American, Reuters and Forbes, for example, in which Li-ion-powered devices have either caught fire or exploded as a result of the fundamental flammability and reactivity of lithium. 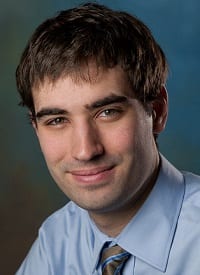 "Apart from being much safer for consumer applications, magnesium-ion technology is appealing fundamentally because each magnesium ion gives up two electrons per ion -- twice the charge, whereas each lithium ion gives up only one," says Texas A&M chemistry graduate student and NASA Space Technology Research Fellow Justin Andrews, first author on the team's paper.

"This means that, all other considerations aside, if you can store as much magnesium in a material as you can store lithium, you immediately almost double the capacity of the battery," Andrews observed.

But for all their perceived advantages, magnesium batteries have proven too good to be true since they were first proposed in the 1990s and essentially sidelined by a variety of problems; primarily, the lack of a suitable cathode, or positive electrode -- otherwise known as the part of a battery where the magnesium ions enter during discharge of the battery to power an electronic device and then exit during charging.

"Indeed, the most exciting thing about magnesium ions -- namely, that they store twice the charge in battery applications -- also forms the basis for the biggest challenge," says collaborating UIC chemist Jordi Cabana. "The higher charge of the magnesium ions make them 'stick' much more strongly with surrounding atoms."

In other words, Banerjee says, the magnesium ions get waylaid as they are traversing through the paths within the cathode material. Their sluggish movement is what makes it so difficult to make viable magnesium batteries.

"In many structures, some of these interactions are very favorable, meaning that the magnesium is quite happy to sit and stay a while in those specific sites," Andrews explains.

"In our material, the magnesium is 'frustrated' as it moves through the lattice, because it encounters many less-than-optimal environments. In this sense, it is more than happy to just keep moving right along, leading to an improvement in capacity and diffusion," stated Andrews.

Atomic resolution images of the new form of vanadium pentoxide were collected in collaboration with UIC physicist Robert F. Klie and physics graduate student Arijita Mukherjee and show direct evidence of magnesium intercalated within the material. Battery measurements that show reversibility and confirm the robustness of the cathode material complete the story and were conducted in collaboration with Cabana and former Cabana group member Hyun Deog Yoo.

"On paper, magnesium batteries are highly desirable because they promise greater energy density on top of the ability to solve several of the key issues researchers -- and unfortunately consumers -- are discovering with lithium-ion batteries, including cost, safety, and performance at the most fundamental levels," Andrews says.

"But the shift from lithium- to magnesium-ion technologies is not straightforward, and the many problems encountered when designing magnesium-ion cathodes have stymied the development of these more sustainable and safer batteries," Andrews concluded.

Working Toward a Safer Energy Future

Andrews says the team's research marks an important turning point in the field because it represents a significant advance toward solving the cathode problem while also highlighting the inherent advantages of using much more imaginative, metastable materials like this new form of vanadium pentoxide. But even he admits there's much more work to do before this particular '90s trend comes back in vogue.

"While this research has provided a great deal of insight, there are still several other fundamental problems to overcome before magnesium batteries become a reality," Andrews adds. "Nevertheless, this work moves magnesium batteries one step closer to reality -- namely, a reality where batteries would be less-expensive, lighter and safer for allowing for easier adoption to large-area formats necessary for electric vehicles and to store energy generated by solar and wind sources."

The team's Chem paper, "Reversible Mg-Ion Insertion in a Metastable One-Dimensional Polymorph of V2O5," can be viewed online along with related figures and captions.

Funding for the Molecular Foundry and UIC groups was provided in part by the Joint Center for Energy Storage Research, a Department of Energy Innovation Hub that is supported by the DOE Office of Science. Andrews' work is funded through the NASA Space Technology Research Fellowship Program (Grant Number 80NSSC17K0182).