After years of planning, a $20 million over-canal solar project in California’s San Joaquin Valley is set to break ground next month and come online in 2023 with 5 MW of capacity.

The concept of draping solar panels across an open waterway is relatively new, challenging the conventional approach of mounting panels to the ground or on building surfaces. 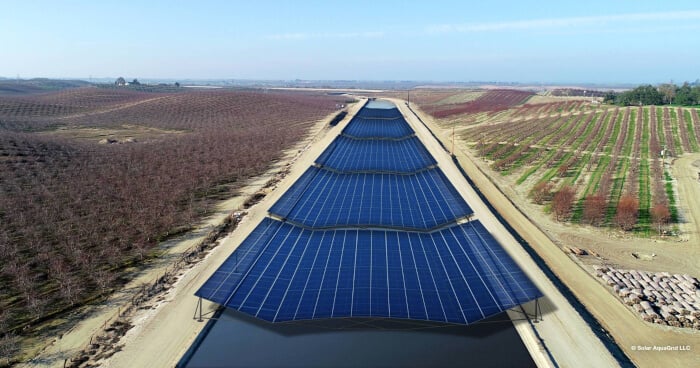 A rendering of the Project Nexus canal-top solar installation in California. Image used courtesy of the Turlock Irrigation District

The feasibility of such a project was scrutinized last year by researchers from the University of California Merced and Santa Cruz, who found that a solar array covering 4,000 miles of public water delivery infrastructure could generate 13 gigawatts of solar power annually or about one-sixth of the state’s current capacity. It would also save 63 billion gallons of water annually through reduced evaporation, a critical factor poised to ease the region’s ongoing severe droughts. For perspective, in April alone, the average person in California used 83 gallons of water daily, per the New York Times.

Project Nexus is nowhere close to that scale, covering just over a mile and totaling only 5 megawatts (MW) of solar capacity. Still, the project serves as a starting point for future iterations, as the first pilot launch of its kind in the U.S. In turn, larger-scale installations could substantially contribute to California’s goal of sourcing 60% of its electricity from renewables by 2030.

The project is a public-private partnership between publicly owned Turlock Irrigation District (TID) and Bay Area-based developer Solar AquaGrid, which originally commissioned the UC study seven years ago. On its website, Solar AquaGrid touts the design’s key benefits, including added efficiency from shading/cooling, reduced evaporation, and lower maintenance costs, as the lack of direct sunlight affects the growth of aquatic weeds.

TID and Solar AquaGrid plan to break ground on Project Nexus in October, with construction expected to finish by the end of next year.

According to the initial draft study prepared for TID, the first site covers about 5,000 feet of the Ceres Main Canal and is expected to generate a combined capacity of 4 MW. The operation will also include a nearby battery storage facility. The second location, near Modesto, is estimated to span about 500 feet and generate 1 MW of capacity.

Overall, Project Nexus will erect about 8,500 feet of solar panels over TID’s canals, according to the district’s website. Both sites will feature a “wide-span canal conceptual design that includes helical piles/foundations that would support the panel pod,” the draft study states.

Though Project Nexus is a first for the U.S., the same concept has already been deployed in South Asia.

The Indian state Gujarat is home to four canal-top and canal-bank solar plants (totaling 35 MW as of May 2022) that were first commissioned in 2014. In 2017 and 2018, the state of Punjab commissioned four solar canal projects totaling 20 MW of capacity. Pakistan is also looking to build canal-top solar projects in the Punjab region bordering India.

In Europe, two French companies are in the early stages of planning four PV systems totaling 12 MW of capacity atop the Provence Canal.