Japanese ceramics manufacturer NGK Insulators, Ltd. (NGK), and BASF New Business GmbH, a wholly owned subsidiary of the German chemical company BASF are expanding their cooperation. In addition to the sales partnership agreement for NAS® batteries announced in June 2019, they have now entered into a joint development agreement (JDA) to develop the next-generation of sodium-sulfur batteries for grid-scale energy storage.

This JDA will exploit the synergy in know-how of both companies, BASF and NGK. The two companies aim to develop the next generation of sodium-sulfur batteries, making use of BASF's extensive chemistry expertise and NGK's expertise in battery design and manufacturing. The project will allow to expand the performance range of NAS batteries and thus open up new markets.

"Thanks to its unique properties, sodium-sulfur technology is ideally suited for the steadily growing market for long duration energy storage. With our envisioned technical advancements, we want to significantly broaden the application spectrum for these batteries," says Dr. Frank Prechtl, Director Business Build-Up E-Power-Management at BASF New Business GmbH.

You may also like: MIT Engineers have Developed a Battery that Removes Carbon Dioxide from Air 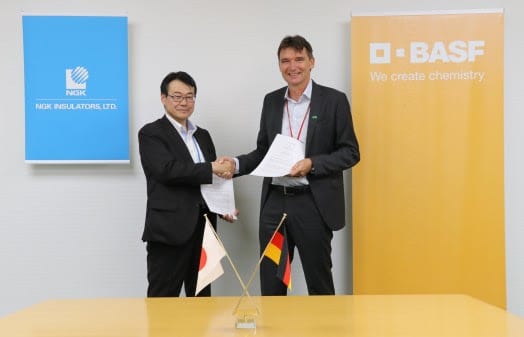 "As we move towards the next generation of sodium-sulfur batteries, the interplay between the chemical processes taking place at battery cell level and the battery modules as a whole system becomes more and more crucial. BASF's chemical expertise and our know-how in the design and production of battery modules and systems complement each other perfectly here," adds Tatsumi Ichioka, General Manager of the NAS battery division at NGK.

NGK's NAS battery is the world's first commercialized megawatt-class battery which has the capacity to store large amounts of electricity for hours. The NAS battery system provides an array of superior features, including larger capacity, higher energy density and longer life compared to other battery technologies. These features are beneficial for stationary applications ‒ in contrast to lithium-ion batteries, for example, which are suited to deliver high power over shorter periods.

The NAS battery system supports the increasing integration of fluctuating renewable energy sources, such as wind and solar, into the grid. It also enables deferral of transmission upgrade, because the electricity does not have to be transmitted immediately after being produced but can be discharged on demand.

Furthermore, NAS batteries are used for the stabilization of electricity supply and emergency power supply for industrial customers and micro/off grids. Through these applications, NAS battery helps to reduce energy costs and environmental load.