Imagine printing off a wristband that charges your smartphone or electric car with cheap supplies from a local hardware store. That's the direction materials research is heading at Brunel University London where scientists have become the first to simply and affordably 3D print a flexible, wearable ‘battery'.

The technique opens the way for novel designs for super-efficient, wearable power for phones, electric cars, medical implants like pacemakers and more.

The printer squirts stacks of silicone, glue and gel electrolyte pastes like a layer cake, to make what looks like a clear festival wristband. Sandwiched inside is a supercapacitor, which stores energy like a battery, but on its surface and without chemical reactions.

Layers of Brunel flexi-battery. Image via Materials Science and Engineering: B journal (click on image to enlarge)

"This is the first time a flexible supercapacitor including all its components has been produced by 3D printing," said Milad Areir at Brunel's Cleaner Electronics Research Group. "The most popular way to produce them is screen printing, but with that you can't print the frame of the supercapacitor on silicone."

Researchers in many countries have found new ways to make flexible supercapacitators. But their techniques, which include 3D laser selective melting machines are expensive and use different machines to print different parts.

"Our technique brings it all together into one process with one machine," said Milad. "It will definitely save time and costs on expensive materials."

The work, published in Materials Science and Engineering, shows the power wristband can be made using cheap products from a household shop instead of sophisticated expensive metals or semiconductors. What's more is that they stand up to stress tests without losing power.

"This has developed a novel 3D printing method for manufacturing flexible supercapacitators, by one single continuous process using low-cost flexible silicone compatible with the electrode, current collector and electrolyte materials," the study says. 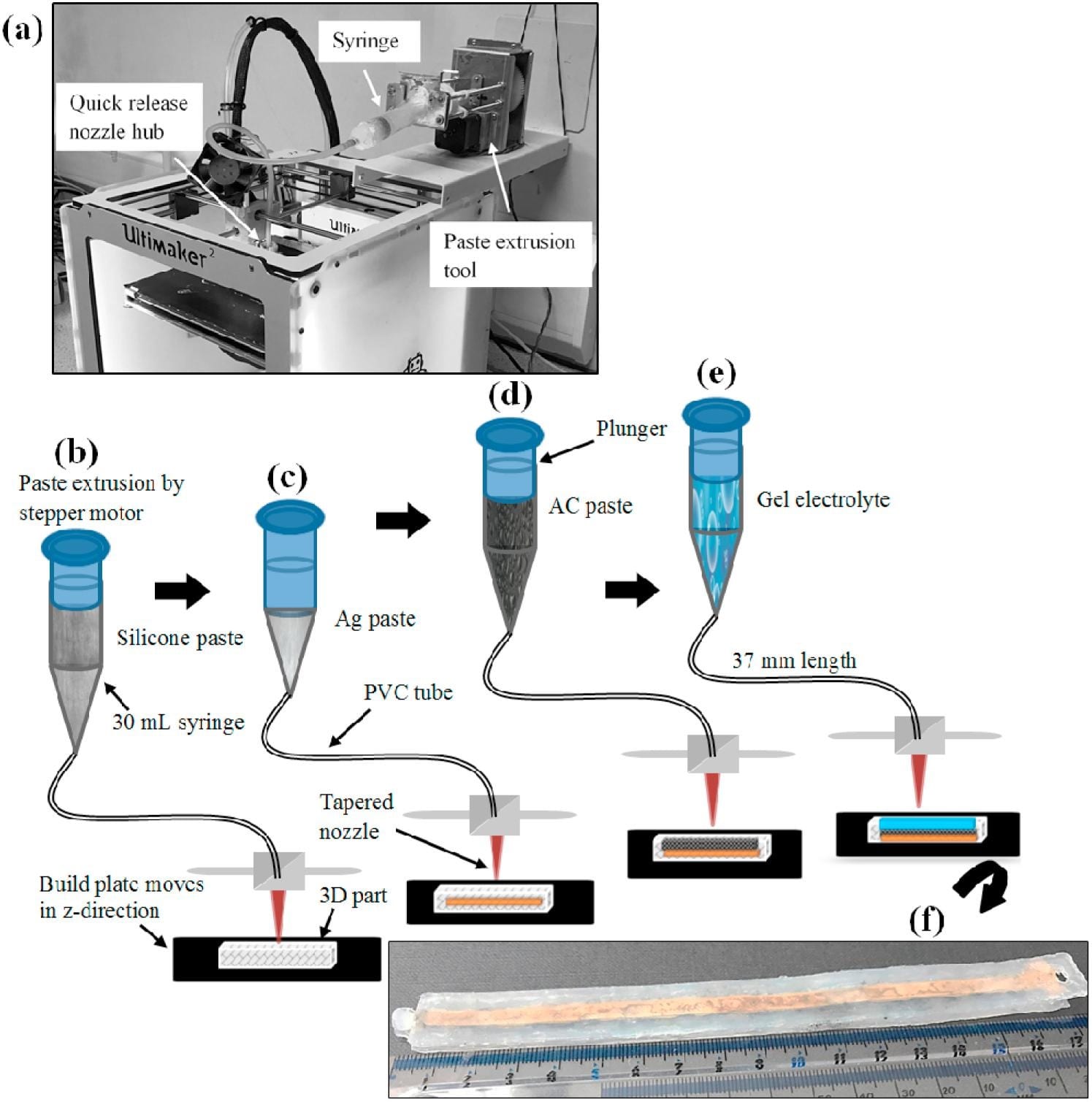 The setup and schematic of the supercapictor 3D printing process developed at Brunel University London. Image via Materials Science and Engineering: B journal (click on image to enlarge)

A simple open-source printer connected by USB to a syringe driver with a stopper motor can print the paste layers, with only three or four syringes based on the size of the supercapacitator. The wristbands are printed in a honeycomb pattern, which means less material needs printing, so they are quicker to make. But designers can also experiment with different complex shapes.

The process is easy to copy, the study says, and shows 3D printing using paste extrusion can be used to develop more sophisticated electronic devices with different mixes of paste.

"In future it can be used for mobile phones," said Milad. "For example, if the phone battery is dead, you could plug the phone into the supercapacitator wristband and it could act as a booster pack, providing enough power to get to the next charging point."