Introduced Tuesday, the TSB582 from STMicroelectronics (ST) is a dual high-output operational amplifier (op amp) whose two individual amps are each capable of sinking/sourcing up to 200 mA.

With two op amps integrated into one package, OEMs opting for the TSB582 should be able to save up to 50% of board space and substantially lower their bill of materials (BOM) cost, ST said in a press release announcing the fresh offering.

As the company points out, the two-in-one nature of the package enables the direct connection of a load in bridge-tied mode. The TSB582 also features rail-to-rail outputs and operates at up to a 3.1 MHz gain bandwidth (GBW).

We have introduced the terms “bridge-tied mode,” “rail-to-rail outputs,” “BiCMOS,” and “gain bandwidth,” so before we delve into product specifications, let’s zero in on what these ubiquitous terms mean.

One generally thinks of an electrical load with one side tied to ground and the other connected to a power source—an op amp in this instance.

In the case of a bridge-tied load, the end that would otherwise be connected to ground is now connected to an op amp of the same power, but in the opposite polarity. The voltage swing across the load is double, and since power is equal to V2R, twice the power can be delivered into the load.

Op amps whose output can range from the value of their positive voltage supply all the way through to their negative supply are said to operate from rail to rail.

The BiCMOS process is a semiconductor technology that combines the benefits of bipolar transistors with those of CMOS technology. BiCMOS enables performance similar to that of gallium arsenide (GaAs) while costing far less.

For those interested in learning more, ST explained the technology in greater depth in an innovation report.

Simply put, the gain-bandwidth product is the product of an op amp’s gain, at any frequency, and the frequency itself. Among other things, GBW determines, as a first approximation, the frequency at which the amplifier's gain is exactly one, or unity.

In addition to operating in bridge-tied mode, the TSB582’s otherwise independent op amps can be connected in parallel, to double the available output current to 400 mA. 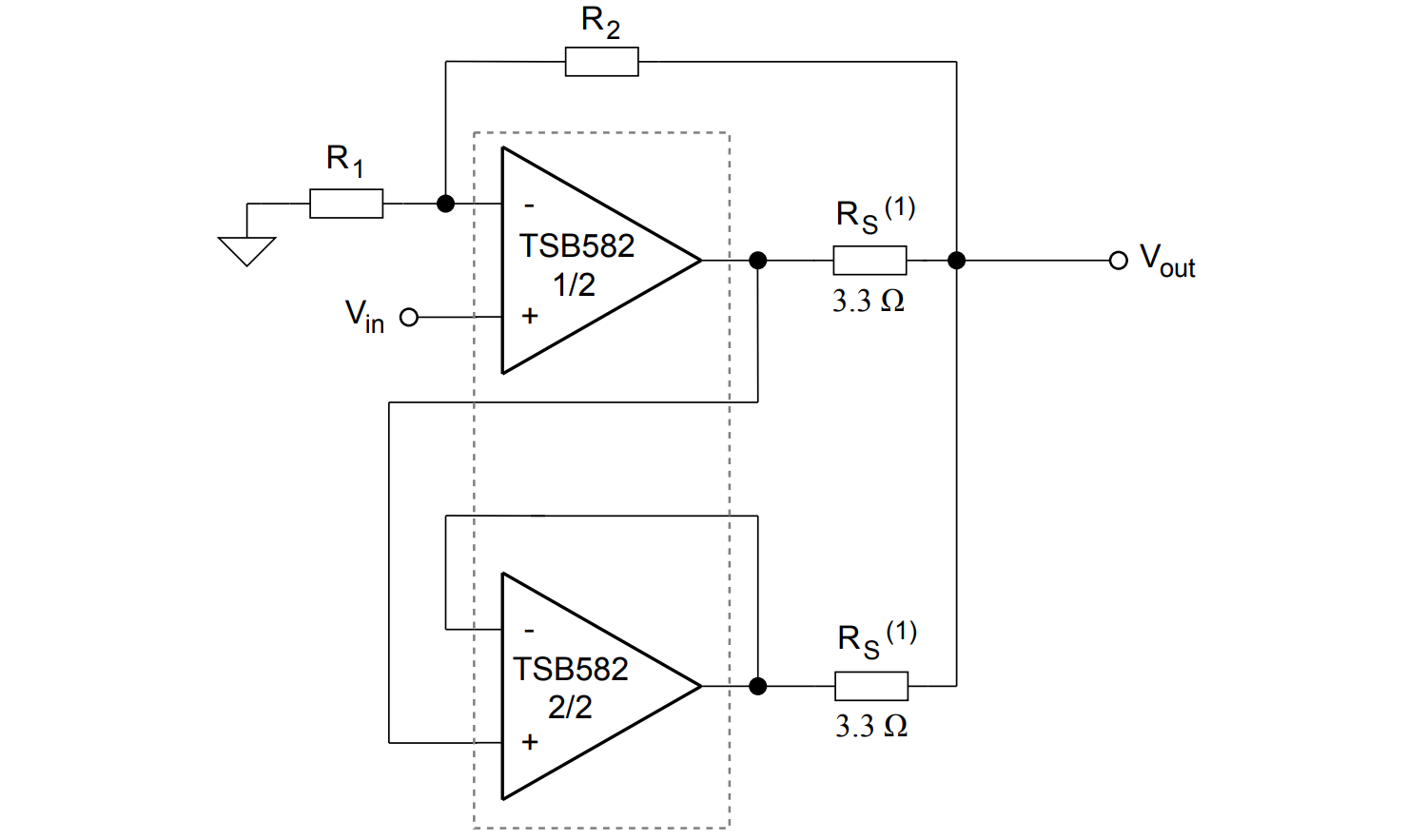 The device's electromagnetic interference (EMI) rejection ratio varies by frequency. It ranges from approximately 28 dB at 10 MHz to 59 db at 1000 MHz. 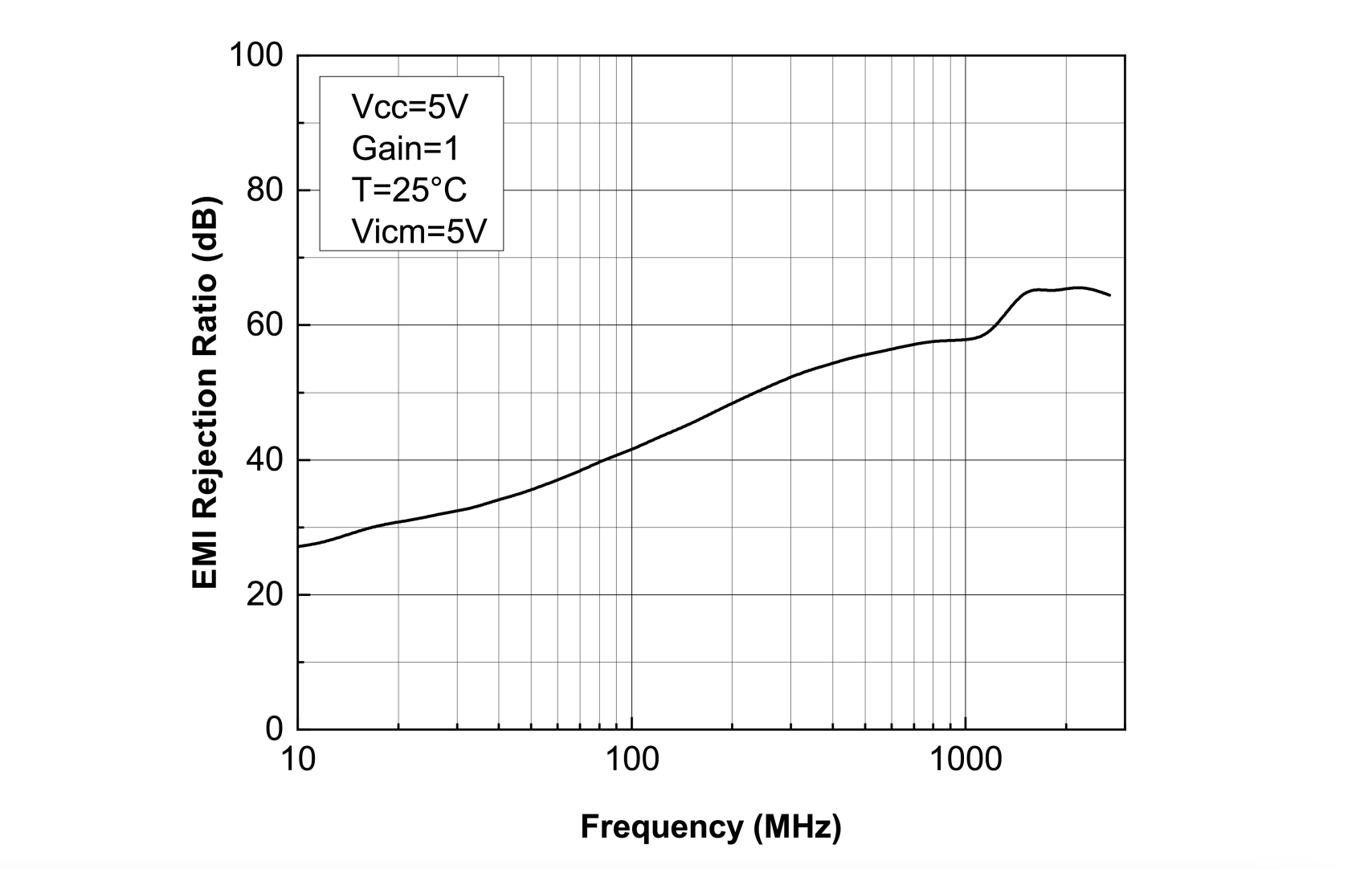 Both versions of the TSB582 feature exposed pads for dissipating heat and are qualified to operate over a temperature range of 40 to +125 ℃ for automotive applications. There is a 6 x 4.9 x 1.8 milimeter SO8 version and, additionally, a 3 x 3 mm DFN8 package available. Thermal resistance, junction-to-ambient, is 45 and 40 °C/W for the SO8 and DFN8 versions, respectively. 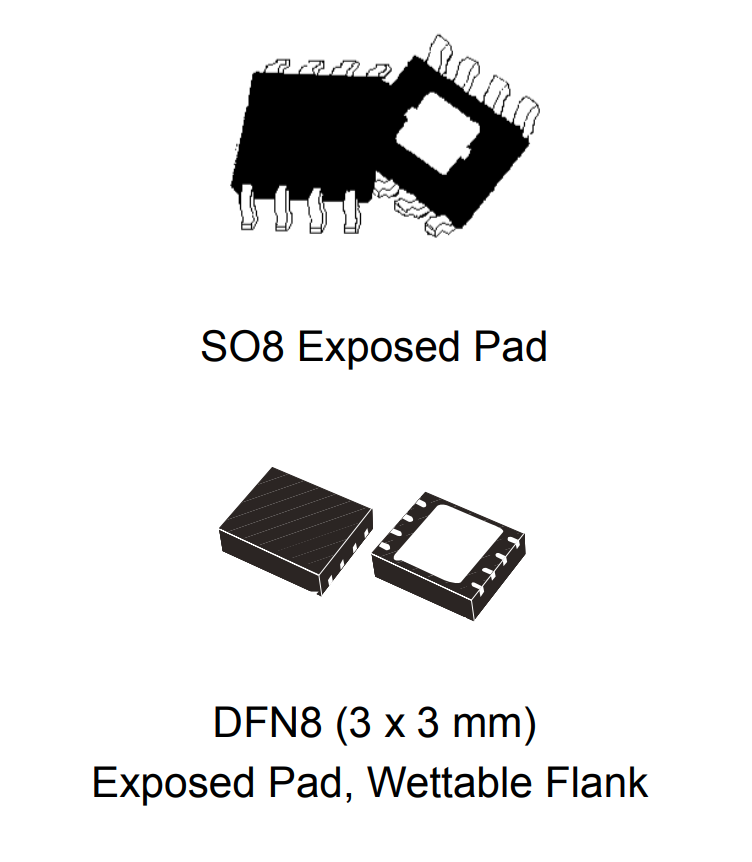 The TSB582 is available in two different packages. Screenshot used courtesy of STMicroelectronics

The DFN8 package features wettable flanks, making it easier to check via automated optical inspection (AOI). This important manufacturing technique is described in a DigiKey TechForum.

The TSB582 can be tasked to valve and servo drive applications. Because it can process high current at relatively low voltage, it will be useful in portable instrumentation. The dual op amp can also be applied to line drivers, motor control, LED driving, angle resolution, and for industrial process control.