With the addition of the MPU02 series of 2-watt, medical-grade DC/DC converters, the company can now satisfy medical power requirements ranging from 1 to 60 W. The industrial PDL12W series delivers 12 W, complimenting P-DUKE’s existing capabilities in the 2 to 9-W range.

P-DUKE introduced the former on June 15, and quickly followed up with the latter on June 29. Both devices are noteworthy because of their small size; the medical units are available in SIP-9 packages, while their industrial counterparts are ensconced in SIP-8.

These units are divided into models accepting input voltage ranges of 4.5-18, 9-36, and 18-75 VDC. Notice that, for example, 36 V is four times 9 V, and that 18 V is four times 4.5 V, hence the 4:1 term describing the input range. This is a crucial feature, as it allows OEMs to stock fewer part numbers to satisfy a wide range of design needs.

P-DUKE claims that its SIP-8 packaged, PDL12W series members save designers 50% in board space when compared to devices in DIP-24 packages, such as P-DUKE's own FKC12W units. 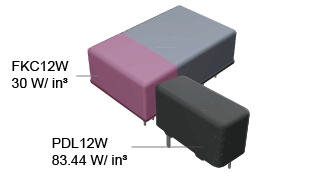 Given that, these devices’ energy density is more than three times greater than that of the previous FKC12W line.

The devices feature 1600 VDC isolation from input to output, with 3000 VDC isolation optionally available. Series members satisfy IEC/EN/UL 62368-1, with shock and vibration levels compliant with MIL-STD-810F. They can operate at up to 90% efficiency over a temperature range of -40 to +70 ℃, but derate linearly to 0 at 105 ℃.

MOPP stands for “Means of Patient Protection,” and is an important specification to understand when delving into medical devices such as those of the 2-watt MPU02 series, as we will below.

MOPP is often contrasted with MOOP, which stands for “Means of Operator Protection.”  The operator, a health care worker, may hold a piece of medical equipment in their hand while applying the  instrument directly to a patient’s skin or even their internal organs. Accordingly, MOPP requirements are far stricter.

Beyond MOPPs, there are trade-offs to be made between leakage current and EMI, because the capacitors required for filtering can produce a small but not insignificant amount of leakage current.

The left side of the image below illustrates the basic block diagram for members of the series. The right side illustrates the impressive stability of the output under load variation.

These devices offer two means of protection (2MOPP) as discussed earlier, and feature 5000 VAC of isolation. Creepage is 8 mm, and leakage current is specced at under 2 µA.