Infineon Introduces a Reference Design for a 22kW Motor Driver

Infineon Introduces a Reference Design for a 22kW Motor Driver

The new design is fully customizable and will reduce time to market for a variety of high-power applications.

Infineon’s REF-22K-GPD-INV-EASY3B is a general purpose motor drive powered via a 380 to 480 V three-phase grid. Designed to drive 3-phase AC motors, the unit also serves to showcase a wide variety of the company’s latest technologies. 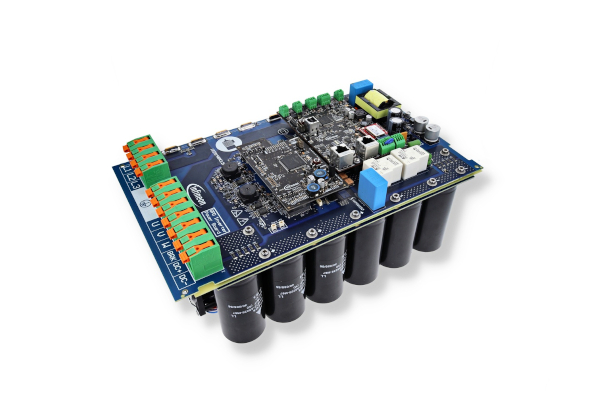 The REF-22K-GPD-INV-EASY3B. Image courtesy of Infineon

As described in its user manual, the REF-22K-GPD-INV-EASY3B is an evaluation board and as such, it cannot be directly employed as a commercial product. It can be considered as a flexible reference, and a shortcut to be employed by OEMs in their own endeavors to design and test innovations of their own.

The evaluation board has not been subjected to the rigorous testing that an actual OEM product from Infineon would be. However, the various subsystems and parts within the device are subjected to the same demand and stresses. Thus, in addition to its role as a flexible blueprint for the design, the REF-22K-GPD-INV-EASY3B is also a way to evaluate Infineon’s chipset under actual real-world conditions.

The diagram of the REF-22K-GPD-INV-EASY3B, with all its subsections, is illustrated below. 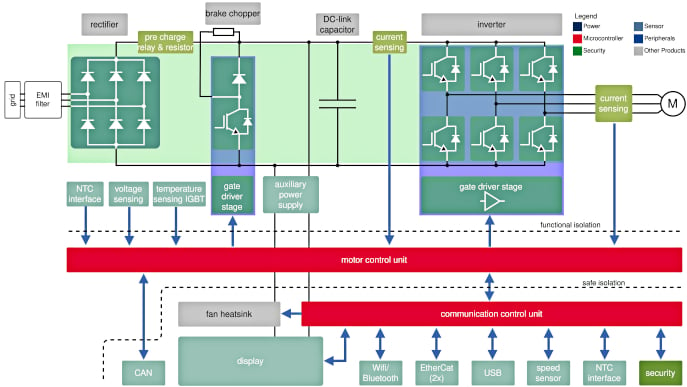 Block diagram of the REF-22K-GPD-INV-EASY3B. Image courtesy of Infineon

The subsections are all parts available separately from Infineon, and are outlined below:

The FP100R12W3T7_B11 EasyPIM 3B IGBT power module features high power density and High current capacity. It employs the company’s TRENCHSTOP IGBT7 devices. The unit operates at 1200 volts and at currents as high as 100 amps

The EiceDRIVER 1ED3131MC12H is purposed to low power losses and to optimizing EMI performance. The device offers a separate sink and separate source outputs of 5.5A. It is designed to work with silicon MOSFETS, SiC MOSFETS, and IGBTs. It features active shutdown, which serves to effect, if needed, and short-circuit clamping in order to limit the gate voltage during short circuit conditions. This driver operates over a wide range of supply voltages, either bipolar or unipolar.

The XENSIV current sensor TLI4971-A120T5 is designed to measure currents of up to ±120A while incurring minimal power losses. The device employs Hall sensor technology, and so the negative effects, such as saturation and hysteresis, commonly encountered with sensors based on flux concentration techniques are avoided.

The unit operates from a single supply voltage from 3.1 to 3.5V. Additionally, it is equipped with an internal self-diagnostic feature.

The IMBF170R1K0M1 CoolSiC 1700V, 1000 mΩ SiC MOSFET is optimized for fly-back topologies employed in power supplies connected to DC-link voltages of up to 1000V.

The device is offered in a TO-263-7 SMD package, enabling it to be directly integrated onto the PCB. This enables natural convection cooling, obviating the need for an extra heatsink.

The REF-22K-GPD-INV-EASY3B employs two of them, the XMC4300 for communication and the XMC4800 for control.

The new reference design is applicable to: