Power engineers are well aware of the inroads GaN-based semiconductors have made across the spectrum of power applications, as the technology makes it possible to build smaller, more efficient units. Nowhere are those capabilities more vital than in aerospace applications, where a new generation of radiation-hardened GaN power semiconductors is offering longevity and reliability even in the harsh radiating conditions of space, which quickly render useless conventional off-the-chef (COTS) semiconductors, such as those used in CubeSats.

The new boards, save the EPC7C006. Image used courtesy of EPC Space

To showcase its own rad-hard GaN technology, EPC Space in January released a new five-member family of demo boards. The family includes three low-side driver boards that employ the company’s eGaN gate driver modules, which drive one of its RH eGaN FETs. A fourth evaluates an RH point-of-load (POL) output stage, while the fifth is an RH three-phase motor demonstration board.

The three demonstration boards all use EPC Space’s FBS-GAM01P-C-PSE gate driver to excite one of the company’s discrete eGaN FETS.

These three FETS, which users can evaluate via the low-side driver boards, all feature:

The EPC7C005 allows evaluation of the FBS-GAM02-P-C50, an RH power module configured as a half-bridge POL output stage. Using the board, engineers can run the power module through its capabilities, which include a VDD of 5 to 50 VDC and loads of up to 10 A. The board’s maximum PWM input is 5 V, with a frequency range of 0.2 to 1.5 MHz and a 90% maximum duty cycle.

The EPC7C006 analyzes the company’s FBS-GAM02-P-R50 module in a three-phase motor configuration. 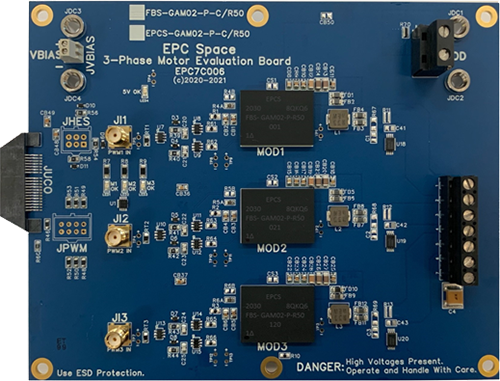 The module features maximum operating voltages and currents of 50 V and 10 A, respectively. Its operating frequency is 0.2 to 1.0 MHz.

EPC Space has long competed in the rad-hard arena, where it is met by companies such as Microchip and STMicroelectronics. With these new demonstration boards, it hopes to provide designers with yet another tool to reap the benefits of eGaN technology, per CEO Bel Lazar.

“We are happy to provide an easy-to-use evaluation platform to assist designers looking to convert their RH silicon designs to take advantage of the higher power densities, higher efficiencies, and better cost and delivery that GaN offers,” Lazar said.