The new solution builds on a previous one e-peas and TCT had created, which could extract energy from single-phase wire, and can now be used with three-phase cabling.

e-peas and Tores Composants Technologies (TCT) announced they have renewed an existing partnership to work on innovative ways to harvest energy.

As part of their joint recent efforts, the companies have made ‘another major advance in the harvesting of energy from power lines.’ 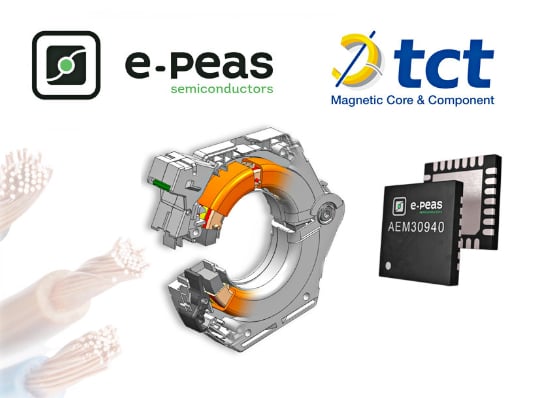 In the device, the current transformer is clipped around the cable, to enable the component to extract AC via induction, then convert it into DC using rectification circuitry.

The converted current can consequently be used by the PMIC to power the electronic system it is connected to.

According to e-peas, many Internet of Things (IoT) scenarios may benefit from the new technology, and particularly applications where energy-autonomous sensing and communication equipment is deployed near AC electricity distribution infrastructure.

“Our company has been working closely with e-peas for just over two years, and what we have been able to achieve will have major implications for the emerging IoT sector,” said Alexandre Decombejean, Sales Manager at TCT.

In fact, the new technology could potentially eliminate the need for replacing batteries altogether, with a consequent reduction in operational spending.

“The low cold-start capabilities of e-peas PMICs really provide the differentiation that we needed for this energy harvesting arrangement,” Decombejean added.

According to the sales manager, the use of traditional devices in these scenarios would mean that much of the available energy would be wasted, instead of being harvested.

“The new three-phase cable energy harvesting hardware we are now demonstrating will give us access to a broad selection of different deployment possibilities, allowing battery-less operations to be implemented across a multitude of customer applications,” added Christian Ferrier, e-peas’ CMO.

An Expert in ‘Industrial Magnetism’

Originally established in 1970, TCT specializes in the manufacturing of wound passive components and magnetic cores.

The company then became an independent entity in 2000 and was acquired by the SOCOMEC group in 2008.

Throughout the past five decades, TCT’s focus has remained the same, with the company designing and developing a number of complete magnetic solutions for the energy, power conversion, and transportation sectors.

Based in France, today TCT counts more than 60 employees and more than 180 customers.

The latest collaboration with e-peas is the latest application of TCT’s magnetic-focussed solutions.

“We envisage this solution being pivotal in enabling the widespread implementation of smart factory and smart city projects around the world,” Ferrier concluded.

The companies will showcase the technology again at the SIDO Paris event next month. You can follow this link to register for the event.