Recent growth in renewables, electric vehicles, sensor technology, semiconductors, and other electronics-heavy industries equates to renewed demand for talent in the power engineering field. Such sectors rely heavily on engineers with a wealth of skills in designing and developing complex systems and components.

Demand for engineers in the power and energy sectors is generally strong right now, says Amber Orr, chair of the Careers and Professional Development Committee at IEEE-USA, a New Jersey-based professional membership organization.

“This is being boosted in part by an increased focus on the modernization and revitalization of our nation's power grid,” Orr told EE Power in December. “Such work is critical to increasing resiliency in this country's most essential services and infrastructure.”

Indeed, clean energy jobs are booming in line with the sector’s growth overall. This area is a common destination for power electronics engineers, automotive/EV companies, utilities, and niche markets.

Thousands of positions are available on job boards in the U.S. and worldwide. Here’s an overview of results inputting the “power electronics” keyword (data as of Jan. 18):

At the same time, Orr has observed that accelerated retirements of older workers yield a more competitive environment for power engineers than before.

“We’re seeing a surge of baby boomer retirements that were delayed for a variety of reasons then hastened by the pandemic,” Orr says. “With simultaneous high demand and lower supply of power engineers, career prospects and salary growth in this sector are robust.”

Such jobs generally pay well above median salary levels, as outlined in a recent survey of 601 professionals in the power and energy sectors who are U.S.-based members of the IEEE, which has nearly 410,000 members across 160 countries. EE Power obtained a copy of IEEE’s 2022 Power and Energy Industry Special Salary Report, finding that the median total income in this field was $142,000 in 2021, while the median base salary was $131,000. Comparing different roles, marketing/sales and general management earned the highest income ($182,500 and $162,700), while operations/construction/maintenance ranked lowest, at $123,400.

The survey also showed that private industry employers (operating outside of the defense industry) and utility companies provided the highest compensation, with the median being $147,500 and $144,000, respectively. However, professionals at educational institutions earned the lowest salaries, at $106,000.

The power and energy sectors offer a decent ladder for advancement. The median starting income is $75,000, but those working in their profession for at least 25 years more than doubled their initial income, earning $162,000.

However, salaries in this sector are outcompeted by other specialties elsewhere. IEEE provided EE Power with a copy of its 2022 Salary and Benefits Survey Report, which surveyed 4,650 members across multiple areas of expertise. Communications technology, for example, had the highest median earnings of $193,000, while energy/power ($142,000) ranked lowest.

The U.S. Bureau of Labor Statistics (BLS) says that the overall employment trajectory of electrical/electronics engineers is expected to increase by 3% between 2021 and 2031, a pace slower than the averages listed for other occupations. However, each year is projected to see about 20,100 openings in this category on average over the next decade—a trend the BLS attributes to the need to replace workers transferring to other fields or exiting the labor force.

The BLS noted that companies continue to have a high demand for the expertise of engineers specializing in electronic devices and systems, particularly for developing advanced consumer electronics, solar arrays, semiconductors, and communications technologies. 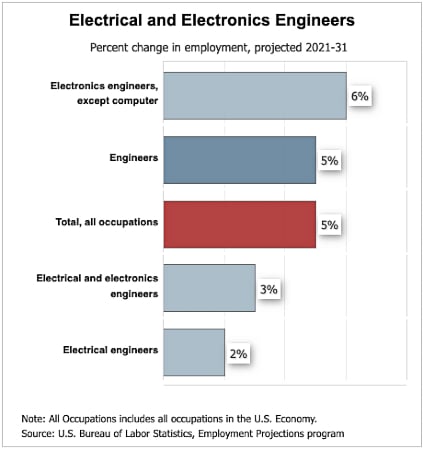 This chart shows the employment outlook for electrical and electronics engineers through 2031. Image used courtesy of the Bureau of Labor Statistics

It’s important to note that the BLS data mentioned above only offers a broad overview of the electrical engineering field. More specific roles have varying outlooks. For example, the employment of computer hardware engineers is expected to increase by 5% from 2021 to 2031, on pace with all other occupations. However, the job market for electro-mechanical and mechatronics technologists and technicians is projected to decline by 4% through 2031, with the BLS noting that automation in manufacturing could replace specific responsibilities. Meanwhile, little or no change is expected for electrical and electronic engineering technologists and technicians.

It’s unclear what role artificial intelligence-based software will play in the future of the electronics engineering job market. In a recent IEEE survey involving 350 technology industry executives, 40% said they expect 26% to 50% of jobs across the global economy will be augmented by AI software in 2023. Another 24% of respondents placed that number between 1% and 25%, while 27% estimated between 51% and 75%.