This article will look at some of the most relevant energy usage labelling standards, how they are evolving and how they can be used to provide further information that can help consumers make the most environmentally friendly choice.

Almost every government has made commitments towards becoming greener, more sustainable and reducing their carbon footprints in the fight against global warming. These commitments normally take the form of cutting energy usage, producing energy from renewable resources, and reducing reliance on fossil fuels.

To assist in the reduction of energy usage, labelling systems have been introduced as a policy instrument which allows consumers to see the efficiency of any product at a glance.

Energy labels can be found on almost every type of electrical equipment that you can buy. These labels come in many different formats and styles.

Some of them are voluntary, such as the ENERGY STAR® label, which is administered by the Environmental Protection Agency (EPA) in the USA. Although manufacturers do not need to certify their products to the ENERGY STAR standard to be allowed to sell their products on the US market, with the exception of some government contracts, the label is still sought after by manufacturers to differentiate their brands as high performance.

Alternatively, other labels are mandatory. Mandatory labels are found in Europe, China, and many more countries throughout the world. They are required by local legislation to be placed on products to inform consumers of the efficiency of each product.

Whether the labelling is voluntary or mandatory, they are all intended to inform consumers and encourage them to buy energy efficient products.

Figure 1 is a European example of an energy efficiency label.

A typical policy instrument for governments is to try to increase the average product efficiency by using legislation to stop the sale of the least efficient products. 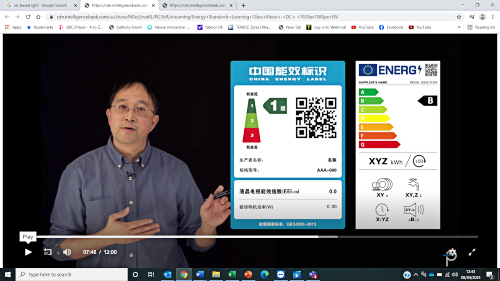 In Europe, the Ecodesign Directive has been developed to set the minimum efficiency requirements, shown by the solid line at the bottom of figure 2.

This means that any product that doesn't meet at least the minimum efficiency requirement, as stated in the regulations, will not be allowed to be sold in the European marketplace.

Once the poorest performing products are removed, the average efficiency of products sold in Europe will be pushed up to a new higher level. 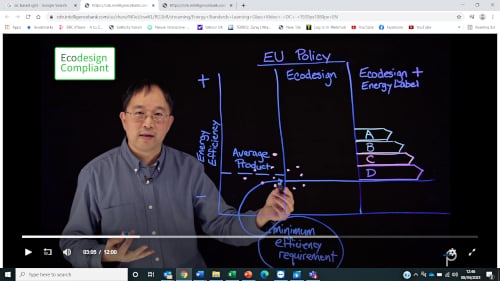 A second policy instrument introduced in Europe that goes beyond the Ecodesign Directive is the energy label. The Ecodesign regulation is still in effect and still sets the minimum performance level, but now there is an additional label to allow consumers to see how well that any given product is performing. An A grade is the best followed by B, C and D for respective levels of performance.

The idea here is that in addition to taking out the worst performers in the marketplace, the new average can be pushed to an even higher level, based on consumers being motivated by the desire to have the products with the best gradings.

However, since March 2021 there has been a significant transition in the way grades are handled on labels. Previously, across a distribution of all the products, 94% of products would be classed as an A grade or better. At the very top end, only 4% would be classified as an A+++ rating. So A really means A, A+, A++ or A+++.

Consumers don’t really have much motivation to keep buying better products after purchasing an A-rated one. The European Commission has recognised this and instituted some reforms.

Of the 15 product categories covered by the energy label in Europe, five have been reformed - refrigerators, washing machines, dishwashers, electronic displays (both televisions and monitors) and lighting.

Enacted in March 2021, the reform saw the label grading shifted entirely so that 98% of those products will have a D label or worse, and only the top 2% will be graded C or better. A monitor that previously had an A+++ grade will now be a C grade.

Again, the idea here is to motivate consumers to feel that there are further improvements to be gained, make the labels and grades themselves more meaningful, and provide a path toward higher energy efficiency overall.

Similiarities and Contrasts in China

In comparison, the energy label for China is marked at the top with the China Energy Agency logo.

Below the logo there is a pyramid which denotes the hierarchy of energy efficiency, which are labelled one, two and three based on a decreasing level of performance. An indicator designates which level the particular product meets.

In Europe, instead of a pyramid there is a set of grades on the left-hand side of the label, designated as A, B, C, D, with A being the highest level.

The European label also shows how much energy the product will typically use. For example, it could denote a full cycle for a dishwasher, or the total energy usage over a year. This information is generally listed in the middle section of the label.

Both the Chinese and European labels have a QR code that links back to a database which keeps track of all the products that have been registered as meeting labelling requirements. When the QR code is scanned for a product, it will have a link to a registry in either Europe or China that has additional product information and some sort of declaration that the performance requirements for the label have been met.

Finally, the European label has separate section at the bottom of the label with space for additional environmental information. This section can be used to signify the level of audible noise for motors in washing machines for example, as the noise output can make a big difference to consumers.

For appliances that use water, a little faucet symbol can be shown to give an indication of the number of litres of water usage in a particular cycle for that appliance.

So, in addition to energy efficiency, labelling can provide much more detailed information that helps encourage consumers to purchase products that are better for the environment in general.