This article highlights the features and advantages of Hioki E.E. Corporation's Memory HiCorder MR6000 which can reach sampling speed of 200MS/s.

Some 35 years have passed since Hioki introduced the first Memory HiCorder waveform recorder in 1983. Today, the line has expanded to include a broad range of models, including two-channel variants that deliver functionality in a compact, lightweight footprint; four-channel portable models that can accept high-voltage input; standard and vehicle-use versions that allow users to freely choose the number of channels thanks to a modular plug-in architecture; and multichannel models (with up to 54 channels) that are designed to be embedded in systems and production lines.​

Most recently, Hioki added the Memory HiCorder MR6000 (Figure 1), a flagship model that delivers high-speed isolated measurement at 200MS/s — 10 times faster than a legacy model — along with the ability to save data in real-time at 32 times the speed of legacy models. 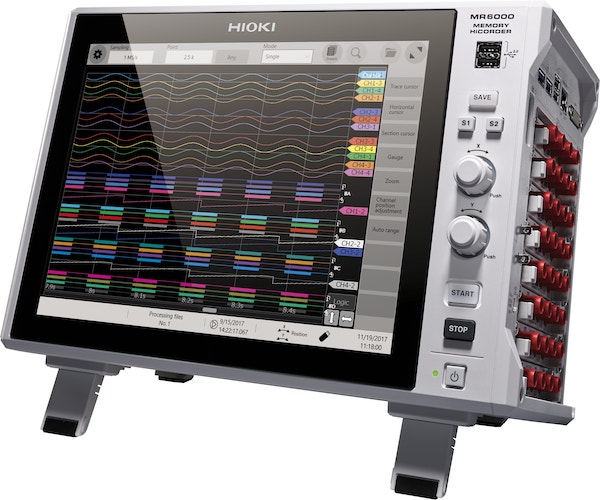 Difference Between Memory HiCorders and Oscilloscopes

Generally speaking, waveform observation instruments take the form of either oscilloscope in the high-speed domain or Memory HiCorders in the medium- and low-speed domain. Oscilloscopes are functional in that they can observe high-speed phenomena, but their reliance on a common ground for all channels raises the risk of inter-circuit shorts and ground faults when measuring circuits where the ground is subject to a potential difference or control circuits carrying both high and low voltage. The industry welcomed the Memory HiCorder as a waveform observation instrument that can be used safely and with peace of mind in such measurement environments because its channels are isolated from one another and from the instrument’s enclosure. Hioki has adopted a modular plug-in architecture for the Memory HiCorder’s internal circuity to accommodate the demand for the ability to simultaneously measure not only voltage signals, but a range of physical phenomena including current, temperature, vibration, pressure, acceleration, and rotational speed. The result is a line of instruments that can measure an array of physical phenomena on a single time axis.

The newly developed Memory HiCorder MR6000 is compatible with the 10 types of measurement modules available for existing models (the MR8847A series), and it provides input circuitry designed to meet a variety of demands. (Figure. 2) For example, maintenance and troubleshooting of grid-tied solar and wind power systems, as well as electric vehicles (EVs), require simultaneous measurement of a variety of electric signals, ranging from high voltages to minuscule voltages from sensors and control signals.

Figure 3.  MR6000 Used in the Development of PWM Inverters

Hioki recommends the High Voltage Input Module U8974, 4ch Analog Unit U8975, and High-Resolution Unit 8968 for use in such applications. The newly developed 4ch Analog Unit is capable of simultaneously measuring up to 32 channels at 16-bit resolution and a speed of 5MS/s, making it ideally suited for use in applications where numerous phenomena must be measured at the same time.

In the development of PWM inverters that combine high-response performance with compact size, an ongoing shift to higher carrier frequencies means a need for higher bandwidth analog characteristics and sampling speeds that are fast enough to catch instantaneous variations (Figure 3). For use in such applications, Hioki recommends the High-Speed Analog Unit U8976, which delivers a sampling speed of 200 MS/s—the fastest in Memory HiCorder history—along with frequency characteristics from DC to 30MHz (Figure 4). The U8976 can accept direct input of up to 400V DC, and it can measure the voltage of up to 1000V DC when used in combination with the optional 9665 10:1 probe. Naturally, the 4ch Analog Unit U8975 and High-Speed Analog Unit U8976 mentioned above can be used safely and with peace of mind since the channels are isolated from one another and from the instrument’s enclosure. 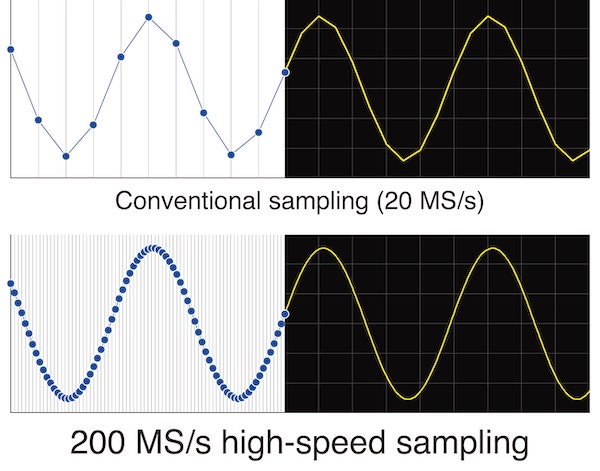 The Memory HiCorder MR6000’s appeal goes beyond its input circuitry’s isolation performance and an extensive selection of modules that can measure numerous phenomena. Other features address measurement over extended periods of time. Recent technological progress has made it more difficult to detect anomalies in signal waveforms, creating uncertainty about how to best configure trigger conditions. Increasingly widespread adoption of simulation techniques in development work has led to situations where engineers have only once chance to acquire data during actual testing. In such applications, there is a need to take advantage of the measurement opportunity in order to capture all phenomena at once. Hioki recommends saving data in real-time to the internal SSD Unit U8332. The Memory HiCorder MR6000 can record 32 channels of data at a sampling speed of 1MS/s for about 1 hour if this SSD is chosen as the destination for saved data. The instrument can also send data for 8 channels sampled at 1MS/s in real-time to a LAN-connected computer so that analysis can begin as soon as the measurement is complete.

Special Features of the MR6000

Having engineered the ability to capture all phenomena during a single measurement opportunity, we asked how anomalies could be more readily detected. It’s not practical to scroll through all captured data while checking it visually. Hioki recommends Memory HiCorder Concierge, a waveform search function built into the Memory HiCorder MR6000, to aid in this task. Simply choose the fundamental waveform after the measurement is complete and press the “Search” button to start searching. The Memory HiCorder MR6000 will automatically detect the characteristics of the fundamental waveform and search through saved data in order, looking for anomalous waveforms exhibiting a low degree of similarity. This approach can be expected to yield a significant improvement in work efficiency compared to the practice of scrolling through data while visually checking the waveforms. 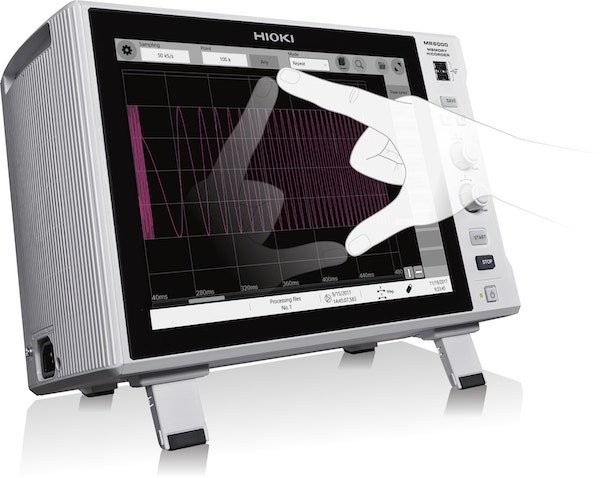 Apart from its waveform search function, the instrument provides other functionality designed to boost work efficiency by saving data more quickly and enhancing ease of use. Because they are designed to measure over extended periods of time, Memory HiCorders often are called upon to handle extremely large volumes of data. Consequently, users have faced the issue of long save times when writing data to USB memory sticks. To resolve this problem, we redesigned the Memory HiCorder MR6000’s interface to implement support for USB 3.0 and GbE. We also improved the process by which data is transferred from the instrument’s internal memory, reducing the time required to save data to external media to about 1/10 that of the previous instrument. In addition, previous Memory HiCorders required numerous button operations to configure the desired settings. We addressed this issue by equipping the MR6000 with a touch screen so that users can quickly and easily configure the instrument by directly touching the desired parameter. (Figures 5 and 6) We are confident that faster saving and improved ease of use will help customers reduce work times. 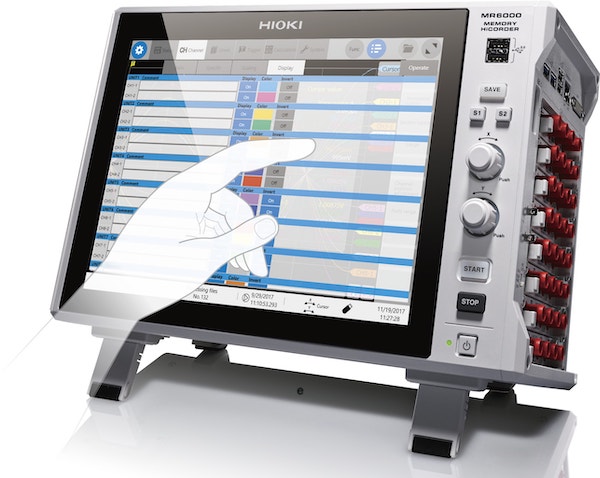 The Memory HiCorder MR6000 is a waveform recorder that combines high-speed isolated measurement with the ability to measure and record a large number of phenomena over extended periods of time. In today’s increasingly diverse, complex systems, verifying overall equipment operation and capturing unexpected phenomena requires the ability to measure more signals along the same time axis. For example, the overall operation of an inverter system can be checked by simultaneously measuring the primary- and secondary-side voltage and current, logic control signals, switching device temperature, and motor RPM and vibration. The instrument’s design also reflects close attention to detail in terms of its high-speed performance by supporting the high-speed transfer of data to computers, as is required in recent computer measurement applications, and by saving data to external media more quickly to address an area of dissatisfaction with the previous instrument. The Memory HiCorder MR6000 can be expected to play a key role in the discovery of difficult-to-detect anomalous phenomena in research and development.

Takashi Hama works at the PM Department - Field Design Division of Hioki E.E. Corporation, A Japanese electrical measuring equipment developer and manufacturer based in Ueda, City, Nagano Prefecture. The company was first established in June 1935 and registered as Hioki E.E. in 1952.