eGaN® Technology is Coming to Cars

eGaN® Technology is Coming to Cars

Automotive technology has entered a renaissance with the emergence of autonomous cars and electric propulsion as the driving forces. IHS Markit estimates that 12 million cars will be autonomous by 2035 and 32 million cars will have electric propulsion according to Bloomberg New Energy Finance, Marklines. Both trends translate into a large growth in demand for power semiconductors. This is also happening at a time when silicon is reaching its performance limits in the world of power conversion, opening a huge new market for power devices based on gallium nitride grown on a silicon substrate (GaN-on-Si).

Why GaN for Cars?

Over the past eight years during which GaN power devices have been in mass production, several large applications where GaN has significant advantages over the aging silicon MOSFET have emerged — LiDAR (Light Detection and Ranging), radar, 48V to 12V DC-DC conversion, high-intensity headlamps, and on-board electric vehicle charging.

One of the first applications anywhere for GaN transistors and ICs was LiDAR, prompted by the creative thinking of Dave Hall at Velodyne. The idea was to trigger laser pulses so fast that the time of the flight of light of the emitted photons could be accurately measured, making it possible to rapidly measure distance within a few centimeters at distances of a few hundred meters. Using a spinning disk with several solid-state lasers stacked parallel to the axis of rotation, Velodyne was able to create a fast and accurate digital point cloud, such as that shown in Figure 1. Much to everyone’s amazement, this sensing technology, combined with cameras and radar sensors, was used by many to create prototype autonomous vehicles. 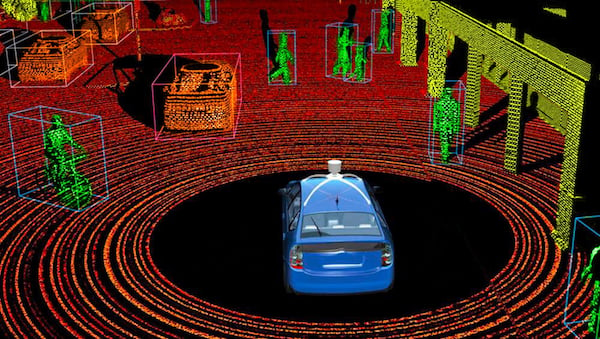 eGaN FETs from EPC were the logical choice to use for firing the laser because the FETs could be triggered to create high-current pulses with extremely short pulse widths (see Figure 2). The short pulse width leads to higher resolution, and the higher pulse current allows the LiDAR system to see further.  These two characteristics, along with their extremely small size, make eGaN FETs ideal for radar and ultrasonic sensors in addition to LiDAR. 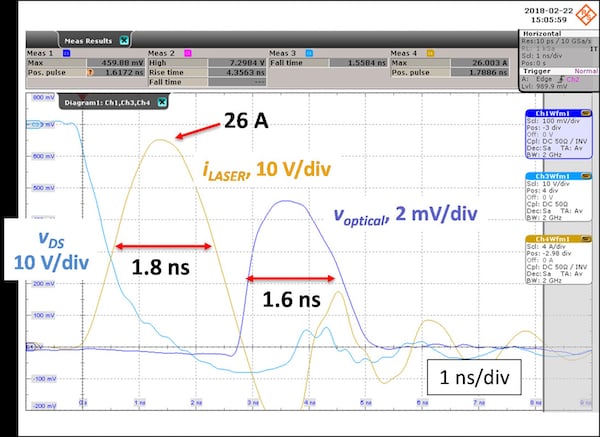 Figure 2: An EPC2202 AEC-Q101 qualified FET is used to generate a 1.8 nanosecond pulse (yellow trace) at a peak current of 26 A. The optical receiver pulse signal is shown as the blue trace.

LiDAR was just the start of a trend. Along with the array of sensors used to provide input for navigating and controlling the vehicle, a new market developed for high-performance graphics processors to integrate these sensor inputs, digest their meaning, and decide what commands to send to the self-driving actuators. With fast processing speed as a key attribute, companies such as Mobileye (now part of Intel) and nVidia have introduced ultra-fast multicore processors. These processors can gather, interpret, integrate, and make sense of all the inputs from multiple radar, LiDAR, camera, and ultrasonic sensors quickly enough to safely navigate our roads and highways.

A cost of these high-performance processors is that they are very power hungry and put an additional burden on traditional automotive 12V electrical distribution buses. The solution to providing the high-power levels to these processors needed for automotive LiDAR systems turns out to be the same solution being applied to operate high performance gaming systems, high performance servers, artificial intelligence systems, and even cryptocurrency mining – implementation of a 48V distribution bus, where current levels and wire sizes can be reduced by a factor of four. Also, 48V is the highest practical voltage for these applications because, given overshoot and various fault conditions, the voltage on the bus will stay below 60V, avoiding the need for additional (and costly) safety measures.

The advantages of 48V become even more evident when all the new power hungry electronically-driven functions and features appearing on the latest cars are considered. For example:

These new functions and features are opening a large new market for 48V to 12V DC-DC converters. Power can be generated at 48V and converted to 12V to run legacy systems and battery packs.

GaN FETs and ICs are the most efficient way to get from 48V to 12V as shown in figure 3. GaN devices are many times smaller than a silicon power MOSFET, and many times faster [1] which leads to higher efficiency as well as smaller, lower cost peripheral components. eGaN FETs from EPC are also on par with silicon when it comes to volume pricing [2]. Now the technology is taking the next step to wide-spread adoption by the automotive world by passing AEC-Q101 qualification testing. 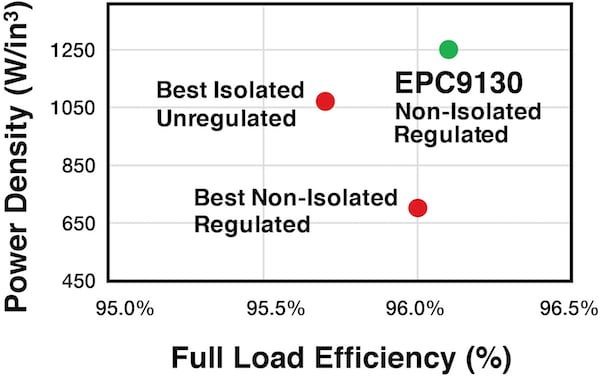 Figure 3. The EPC9130 is a 700 W 48V to 12V DC-DC converter based on EPC2045 eGaN FETs. It has higher power density and higher efficiency than the best silicon-based converters. The eGaN FET-based converter also has the lowest cost bill of materials.

eGaN technology has been in mass production for over eight years, accumulating billions of hours of successful field experience in automotive applications. 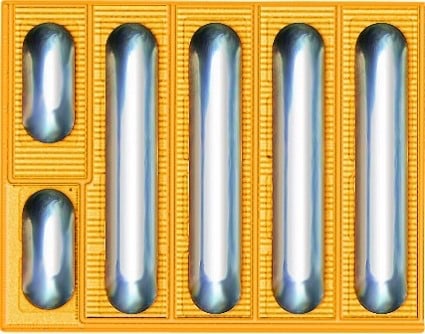 To complete AEC-Q101 testing, these eGaN FETs had to undergo rigorous environmental and bias-stress testing including humidity testing with bias (H3TRB), high-temperature reverse bias (HTRB), high-temperature gate bias (HTGB), temperature cycling (TC), as well as several other tests. Of note is the fact that these wafer level chip-scale (WLCS) devices passed all the same testing standards created for conventional packaged parts, demonstrating that the superior performance of chip-scale packaging does not mean a compromise to ruggedness or reliability. These parts are produced in facilities certified to the Automotive Quality Management System Standard IATF 16949.

Automotive electronics can now take full advantage of the improved efficiency, speed, smaller size, and lower cost of eGaN devices with the completion of the AEC-Q101 qualification testing of the EPC2202 and EPC2203. Throughout 2018, there will be several additional 80V parts undergoing certification, expanding the range of performance to higher currents.