The LTM®4636 is a 40A-capable μModule® regulator featuring 3D packaging technology, or component-on-package (CoP) to keep it cool. In addition to dissipating

The LTM®4636 is a 40A-capable μModule® regulator featuring 3D packaging technology, or component-on-package (CoP) to keep it cool. In addition to dissipating heat from the top through the exposed inductor, the LTM4636 efficiently disperses heat to the PCB via 144 BGA solder balls dedicated to GND, VIN and VOUT — where high current flows.

The body of the device is an over-molded 16mm × 16mm × 1.91mm BGA package with an inductor stacked on top to expose it to cooling airflow. The total package height is 7.16mm. A single LTM4636 is rated for 40A loads; two parallel converters can support 80A; four support 160A. Upscaling a power supply by paralleling LTM4636s is easy: simply copy and paste the single-regulator footprint, as shown in Figure 1. 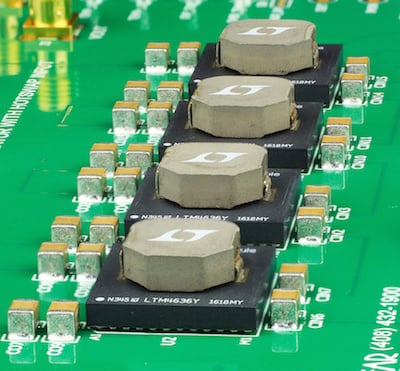 Figure 1: 3D Packaging of the LTM4636 Puts One of the Hottest Components, the Inductor, on Top, Where Significant Surface Area Is Exposed to Airflow. It Is Easy to Lay Out Parallel LTM4636s to Scale Power Capability—Simply Duplicate the Layout of One Channel and Multiply. The Clean Layout Here Shows Four Channels at 40A Each.

The current mode architecture of the LTM4636 enables precision current sharing among the 40A blocks. Precise current sharing, in turn, produces a power supply that spreads the heat evenly between devices. Figure 2 shows that all devices in the 4-μModule 160A regulator operate within 1°C of each other, ensuring that no individual device is overloaded or overheated. This greatly simplifies heat mitigation. 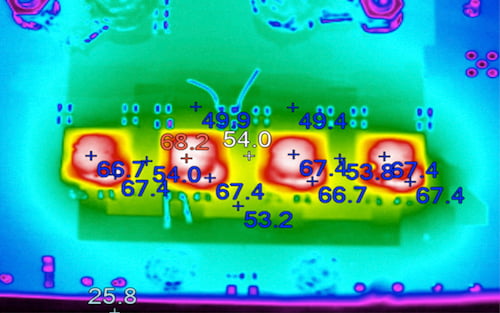 Figure 2:Precision Current Sharing Among Four LTM4636s Running in Parallel, Resulting in Only 40°C Rise in Temperature for 160A Application.

Figure 3 shows the complete 160A design. Note that no clock device is required for the LTM4636s to operate out-of-phase to each other—clocking and phase control is included. Multiphase operation reduces input and output ripple current, reducing the number of required input and output capacitors. Here, the four LTM4636s run 90° out-of-phase. 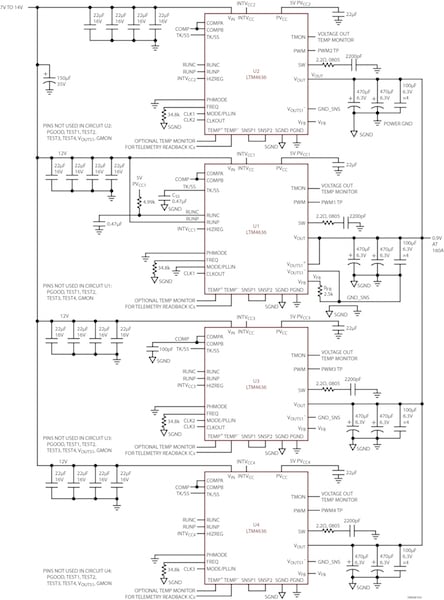 Choosing a POL regulator for a densely populated system requires a scrutiny beyond voltage and amperage ratings of the device. Evaluation of package thermal characteristics is essential, as it determines the cost of cooling, the cost of the PCB and the final product size.

Afshin Odabaee holds a Bachelor's Degree in Electrical and Electronics Engineering at Santa Clara University and is particularly skilled in semiconductors, mixed-signal and integrated circuits. Afshin currently works as the Director of Business Development for µModule Power Products at Analog Devices Inc.